Matt Taibbi writes that the dynamics of the 2016 Republican primaries are playing out again in the 2020 Democratic primaries and that it favors Bernie Sanders.

In reality, the results for Sanders cut both ways. On one hand, it’s amazing he can win any state after years of propaganda depicting him as a half-dead cross of Hitler and Stalin (MSNBC before New Hampshire outdid itself with Looney Tunes commentary about “executions in Central Park” and a “digital brownshirt brigade”).

One of the lessons of 2016 was that cheeseball clichés like “the Big Mo,” “straight talk,” and the “beer test” no longer had traction. Voter calculations were about rage and nihilism: They were done with catchphrases. Like amputees who still feel a leg is there, pundits continued speaking in this dead language, which widened the credibility gap further.

Four years later, they’re still doing it. Kasich of all people was on CNN Tuesday night talking about “the Big Mo.” Van Jones wondered about the “beer lane.” “Klomentum” is the relic being flogged this morning. The “firewall” might be next.
…

As with Republicans in 2016, the defining characteristic of the 2020 Democratic race has been the unwieldy size of the field. The same identity crisis lurking under the Republican clown car afflicted this year’s Democratic contest: Because neither donors nor party leaders nor pundits could figure out what they should be pretending to stand for, they couldn’t coalesce around any one candidate.

These constant mercurial shifts in “momentum” – it’s Pete! It’s Amy! Paging Mike Bloomberg! – have eroded the kingmaking power of the Democratic leadership. They are eating the party from within, and seem poised to continue doing so.

For Sanders supporters, the calculation has always been simpler: Are you bought off, or not? Just by keeping to the right side of that one principle, Sanders will hold his 20-to-30 percent and keep grinding toward victory, “narrow” wins or not. It’s a classic tortoise-and-hare story. When you know where you’re going, you tend to get there.

Mehdi Hasan also finds the current state of media prognostications to be less than inspiring.

Bernie Sanders is now the undisputed frontrunner in the race for the Democratic presidential nomination.
…

What a difference a year makes. When he launched his second presidential campaign, in February 2019, the independent senator from Vermont was mocked and written off by much of the pundit class. The Washington Post’s Henry Olsen called him a “one-hit wonder,” adding: “After a few concerts that attract ever more ‘selective’ audiences, he will likely drop out and retire, his influence consigned to history.”
…

On Twitter, Olsen’s fellow Post columnist Jennifer Rubin described Sanders as “yesterday’s news” and suggested he would face “stiff competition for youth vote” from Beto O’Rourke. (O’Rourke quit the race in November, while Sanders won almost half of 17- to 29-year-olds in Iowa and more young voters in New Hampshire than “all of the other candidates combined.”)

Yet another Post columnist, David Von Drehle, wrote how Sanders would find “that his moment is gone, his agenda absorbed by more plausible candidates, his future behind him.”

Then there was MSNBC host Chris Matthews, who claimed Sen. Elizabeth Warren would “blow out Bernie pretty early on. Bernie will lose his votes to her.” (Warren, for the record, came third in Iowa and fourth in New Hampshire.)

MSNBC political contributor Jason Johnson went even further: “I see Bernie Sanders launching his campaign and by August, realizing he won’t be in the top five in Iowa, and dropping out.”
…

Up next are the Nevada caucuses on February 22, where only a single percentage point separates Biden from Sanders. In South Carolina, which goes to the polls on February 29 and where Biden once led by a whopping 31 points, Sanders has narrowed the former vice president’s lead to 8 points in the latest Zogby Analytics poll.
…

No wonder Democratic Party elites are panicking. We hear the same tired arguments about Sanders lacking “electability.” These arguments conveniently ignore the fact that Sanders beats Trump in head-to-head polling; that the Vermont senator is the most popular member of the Senate; and that this self-proclaimed socialist has both the highest “net favorability rating” among Democratic voters as well as the most enthusiastic base.

Plus, the only way to test “electability” is through actual elections, and so far Sanders is two for two.

Iowa and New Hampshire, though, weren’t only victories for the senator from Vermont; they were also victories for Sanders’s signature issue, Medicare for All. Asked last week in an entrance poll how they felt about “replacing all private health insurance with a single government plan for everyone,” 57 percent of Iowa caucus-goers said they backed it, while only 38 percent were opposed.

In New Hampshire, on Tuesday, again almost six in 10 voters said they supported a Medicare for All system over the current private insurance system, according to an early exit poll.

Yet again, the pundits and prognosticators were wrong. “Iowa Democrats worry ‘Medicare for All’ hurts key industry,” read the headline in the Associated Press in December. “In Iowa, Single Payer ‘Medicare For All’ Loses Ground,” declared Forbes in August. “Medicare For All Isn’t That Popular – Even Among Democrats,” proclaimed FiveThirtyEight’s Nate Silver a month earlier.

The mainstream media will ignore the inconvenient facts that Taibbi and Hasan point out and ratchet up the volume about how Sanders is not electable and how the policies he proposes are not popular with voters and that voters prefer any one of the center-right candidates, even as each one fails to perform up to their expectations. The cable news networks just cannot bring themselves to admit that Sanders won the most votes in both Iowa and New Hampshire and are desperately seeking to find another way to spin the news.

Sanders falls to last place in new national poll when all of his opponents are added together into a single, non-existent candidate. pic.twitter.com/zEfXM03dDu

Below is what drives the oligarchy crazy, that Sanders attacks their beloved Wall Street banking heroes like former Goldman Sachs CEO Lloyd Blankfein.

Here is Blankfein’s criticism of Sanders.

The long-time billionaire head of Goldman, Sachs is very angry about Sanders winning because he'll ruin our economy & "doesn't care about our military."

He somehow links it all to RUSSIA: Putin will likely support Sanders this time, he says.

US oligarchs are rotted and dumb: https://t.co/QZSBiGnatJ

Sanders’s campaign team have hit back saying that Blankfein inserting himself into the race is a sign of panic among the oligarchy. Here is Sanders’s own response.

You have got to hand it to Sanders. He makes the right enemies and has brought all these billionaires who like to manipulate the system behind the scenes out into the open.

But don’t worry! When all else fails, billionaire Michael Bloomberg who was for almost his whole life was until as recently as 2007 was a registered Republican and registered as a Democrat only in 2018, will ride to rescue the Democratic party! I am sure that Blankfein will approve of him and all those who in the media who now attack Sanders for not really being a Democrat will forget about that. 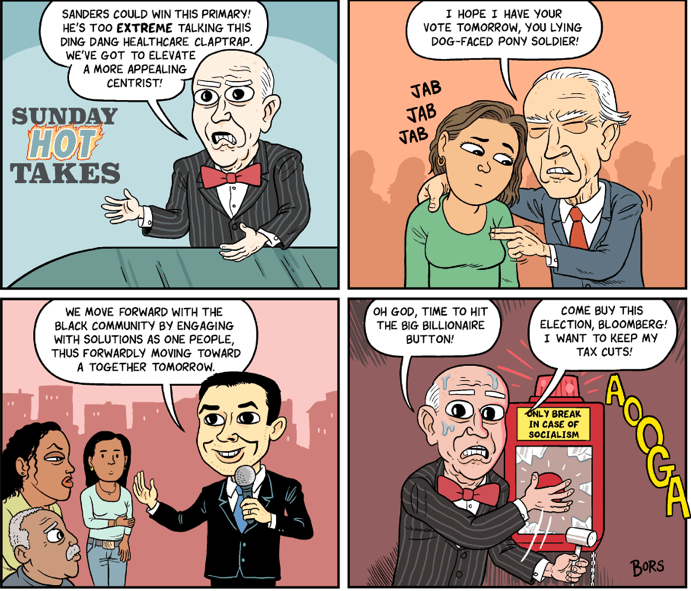