I have not been writing much about the impeachment trial in the US senate because I view it as political theater with a predetermined outcome since Trump and the Republicans are working together to make sure that no new information comes out, no witnesses are called, and no new documentary evidence presented, so that they can vote on acquittal as quickly as possible. All the posturing by a few Republican senators that they might vote to call witnesses is just that, posturing, so that they can pretend to be thoughtful people rather than hacks and craven Trump toadies.

Trump has warned Republican senators that he will have their “heads will be on a pike” if they vote against him in any way. What kind of person issues such a medieval threat? Any self-respecting senator would have expressed outrage to be talked to as if they were subjects of a king rather than tribunes of the people. But the key phrase there is ‘self-respecting’, a quality conspicuous by its absence.

I always laugh when US senators describe the senate as “the world’s greatest deliberative body”. Do they not realize that they are actually a laughingstock, composed largely of unprincipled and pompous windbags?

Stephen Colbert describes the appalling depths to which Trump’s legal team has sunk.

It should be borne in mind that Trump’s chief defender Alan Dershowitz’s field of expertise is in criminal law, not constitutional law, though he likes to pretend that he knows every area of law. He is widely regarded within the legal field as having become an attention-hungry clown, his credibility in shreds.

Ruben Bolling looks at this modern-day version of 12 Angry Men. 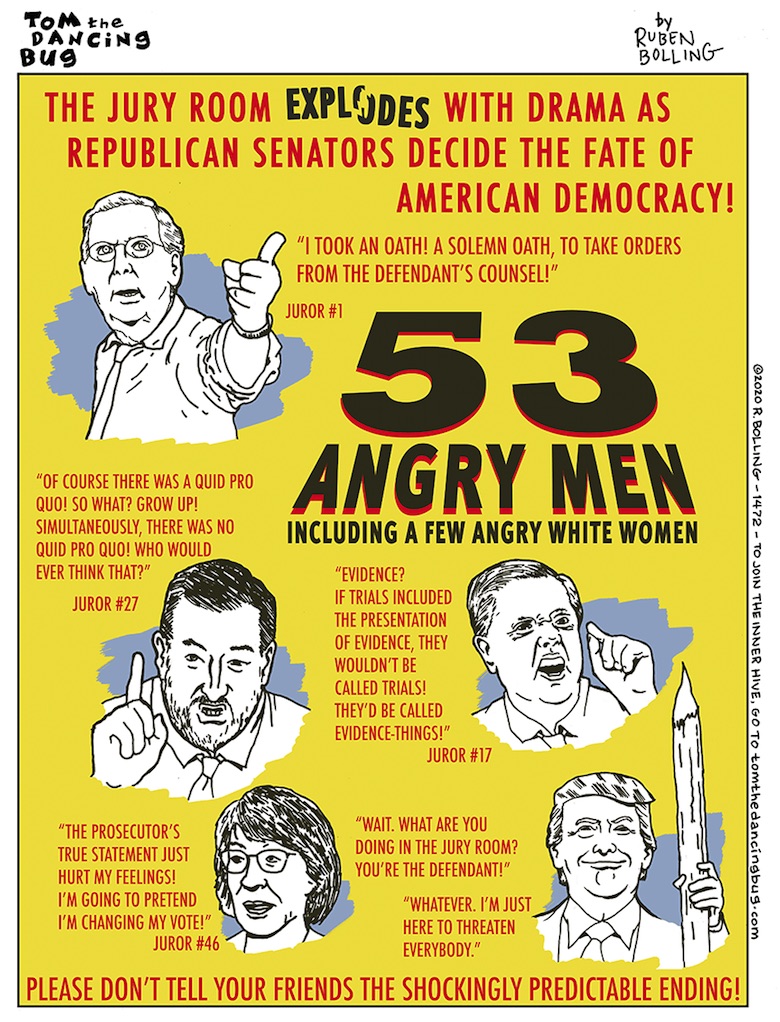