I tried to collect in one place all the adjectives that describe Donald Trump’s qualities and so far have come up with the following list, not in any particular order:

In addition, Alfie Kohn describes him as someone with the “attention span of a toddler” who is lacking in “shame, humility, empathy, or capacity for reflection and self-scrutiny” and also “lacking not only in knowledge but in curiosity”. Kohn quotes Samantha Bee describing him as an “an oddly tinted compilation of psychiatric symptoms.”

What should be disturbing is that although it should be no secret that I utterly detest the man, this list is not pure hyperbole or simply the produce of bile from a Trump hater. They are things that any reasonable observer who has followed Trump’s behavior during the election campaign and even for the period after he was elected president would likely agree with because evidence can be provided in support of each one

And yet, almost half of the Americans who voted in the last election chose to put him into the highest elected office, a position that gives him vast power over not only the USA but the world. While some may not have been fully aware of all his awful qualities the first time around in 2016, there is no excuse now for not knowing what he is like. The fact that so many are still devoted to him does not speak well of them or the state of American democracy.

The Rude Pundit has had it with people who ignore all of Trump’s foul qualities continue to support him and very rudely lets them have it.

Every time we click on the Twitter, we see that there is some new depth to which Donald Trump’s criminality and venality and narcissism has sunk.
…

So if you’re a Trump defender, whether one of his scum voters or a craven congressional worm, you’re obviously comfortable with having a fucking criminal lead you because it makes you feel big and important. You’re a failure of a human being, but fuck it. You gave up giving a shit when it turned out the Negro president was actually good at his job so you had to ignore reality and disappear into the Fox “news” matrix to survive. Now you’re just a vessel getting pumped with a fantasy that comforts you and bears no relationship to the actual world.

And that means ignoring the blatant, pathetic, obvious truth that Donald Trump is not just a fucking criminal. He’s a fucking dolt. He proves that every single time he opens that reverse garbage disposal of a mouth.
…

The House of Representatives just delivered the Articles of Impeachment to the Senate in one of our weird-ass rituals. The trial will start next week. Republicans will be defending a blatant criminal, a violent coward, and a rank moron, declaring that he must be allowed to complete his term and even be reelected. That says something sad and depressing about every single Republican and every single Republican voter.

Goddamn, don’t you even think you deserve better? Or, perhaps, this dumb motherfucker really is the best you can do and you gotta cling to him like parasites on a plump body.

We are truly in a ‘the emperor has no clothes’ situation, except that instead of a child pointing out the obvious and bringing blinding realization to everyone, what it will take for that to happen is for Trump to lose the next election. We will then be treated to the spectacle of a stampede by his erstwhile supporters in the Republican party to condemn him when he is no longer the president and is unable to command all the resources of the government to attack others and serve his personal ends. 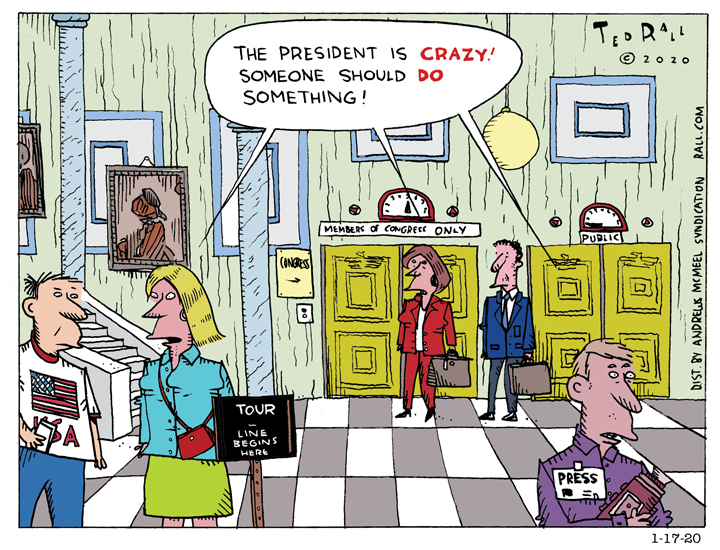 Everyone agrees that President Trump seems to have been exposed as unfit for office in the week of his rash assassination of a top Iranian general. But who is going to act? The public is scared because they know that protest doesn’t work and that it often turns protesters into targets of surveillance. Congress won’t act because they are cowards and are owned by major corporations. And the media won’t do anything for the same reason.