I have written many times before about the intricate set of rules that Orthodox Jews have to live by. Some of the most restrictive are those involving the Sabbath and what can and cannot be done during that period. It appears that there are certain things that you can do within the home that you can’t do outside it, such as carrying certain items in public. This can be a nuisance in the modern age when people are used to having their creature comforts available to them 24/7. But not to worry! As in the case of kosher telephones, certified Sabbath mode ovens, and Shabbat elevators, there is a workaround that enables the observant to broaden their activities without incurring their god’s displeasure, and this one involves placing a string known as an eruv around a perimeter that creates virtual doorways that effectively can make an entire neighborhood into the interior of a home. (At least, that is how I think that ‘theory’ works though someone who is more informed on this kind of arcana may be able to add to it.)

I received a link to a news item from a reader about the Cleveland suburb of Beachwood that is doing just that. And what it involves is a thing of wonder.

“First of all it (enables) people who live near Beachwood Kehilla to cross over Richmond Road and to carry, and anyone else who wants to go visit family and friends who (live) beyond Richmond Road can carry as well,” Burnstein said. “Also, most importantly it allows anyone who wants to go to Menorah Park, Montefiore, to that entire development, (to have) the ability to carry on Shabbos, which has always been a problem. Until now … (if) they were carrying a bottle or something else, they couldn’t carry it past Richmond Road. Now they can go all the way into Menorah Park or into Montefiore… . So it’s a wonderful asset for the community.”

The virtual doorways were historically represented by vines, but today are more commonly represented by utility poles and the wires that pass above or near them. If the lines and poles form 90-degree angles, then they may be considered as part of an eruv. 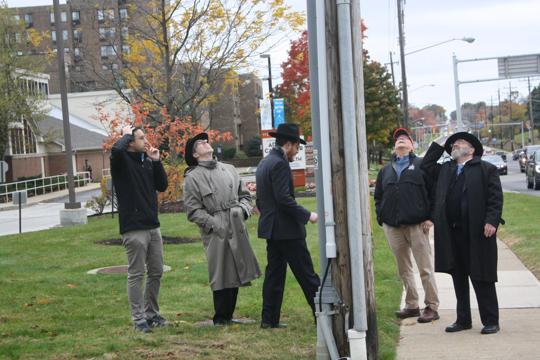 Rabbis making sure that the eruv meets the standards

Among the criteria the rabbis were checking were the angles at which specially installed conduits, called lechis, met the wires on top. Some will have to be adjusted to correct the angle.

The rabbis were also looking at the curve of the wires to assure they did not dip too deeply. In addition, in at least one case, they measured the distance between the ground and the bottom of the lechi, checking to make sure it was within three handbreadths or 9 inches from the ground.

Rabbi Howard Jachter, who was doubly ordained as a rabbi and rabbinic judge at Yeshiva University in New York, flew in from Teaneck, N.J., to oversee and inspect the new eruv. It is one of approximately 60 he has overseen in cities across North America, including Vancouver, San Francisco, Ann Arbor, Mich., and Birmingham, Ala.

I wrote back in 2013 about the problems that a similar effort ran into in a town in New Jersey and the novel interpretation of the Fist Amendment’s Free Exercise of religion clause that they invoked to overcome the objections of the local community. There should be no such problems in this case because the town of Beachwood is overwhelmingly Jewish in its composition.

My theory is that there are two groups of rabbis working in concert. One group decides on ever stricter and more arcane rules that they claim are based on a careful reading of their scriptures. The other group then gets to work to find workarounds and loopholes in the new rules embedded in the very same scriptures. It is kind of like tax lawyers, one set of whom work to make the tax system really complicated and the other set then find loopholes for the wealthy to escape paying them.

Thus we have a system that creates permanent employment for people who like nothing better than to study the scriptures all the time. And they are sustained by people who think that strictly following rules purportedly derived from their holy books is a sure-fire way of gaining approval from their god. A win-win!