While there have been all manner of speculations about how Jeffrey Epstein may have met his death in jail, lawyer Ken White, who has been a federal prosecutor, says that those who think that “jailers could not possibly be so incompetent, cruel, or indifferent as to let such a high-profile prisoner commit suicide” do not realize that the truth may be less sensational but more disturbing, that this kind of death in US prisons is far more common than people think and is due to a culture of neglect, lack of staff, poor training, abuse, and sheer cruelty on the part of those who run these institutions.

White lists 32 cases of inmate deaths or near-deaths and they make for truly depressing reading. Here are just a few.

Andrew Holland died in a restraint chair in San Luis Obispo County, California. He was strapped to the chair, naked, for two days. If you like, you can watch video of the guards laughing as medics try fruitlessly to perform CPR, though I would not recommend it.
…

Michael Anthony Kerr died of dehydration, like Thomas, near Raleigh, North Carolina. Kerr-an Army veteran-was off his medications and lay in his own waste for five days before someone figured out he wasn’t eating or drinking. He was handcuffed the whole time; they had to cut off the handcuffs because the lock was encrusted with his feces.
…

Kenneth Dalstra killed himself in the Ionia County Jail in Michigan by drinking water for two hours until he died. He was on suicide watch. A guard told him to stop drinking, but he did not.
…

Cristobal Solano was arrested for disturbing the peace outside the Key Lodge Motel in Tustin, California. When he resisted a search of his mouth, at least seven guards piled on him, pushed his face into a concrete bunk, kneed him in the back, and sat on him as he screamed “Please, I can’t breathe!” He couldn’t, and he died.

Perhaps the one good thing that may come out of Epstein’s death is that it is when something bad happens to the rich and famous that attention gets focused on the underlying problem. America’s incarceration system is a disgrace and a scandal but nobody cares when poor people suffer and die like this in jail. If Epstein’s death results in even a partial improvement, then in death, his disgusting life would have served at least some purpose. 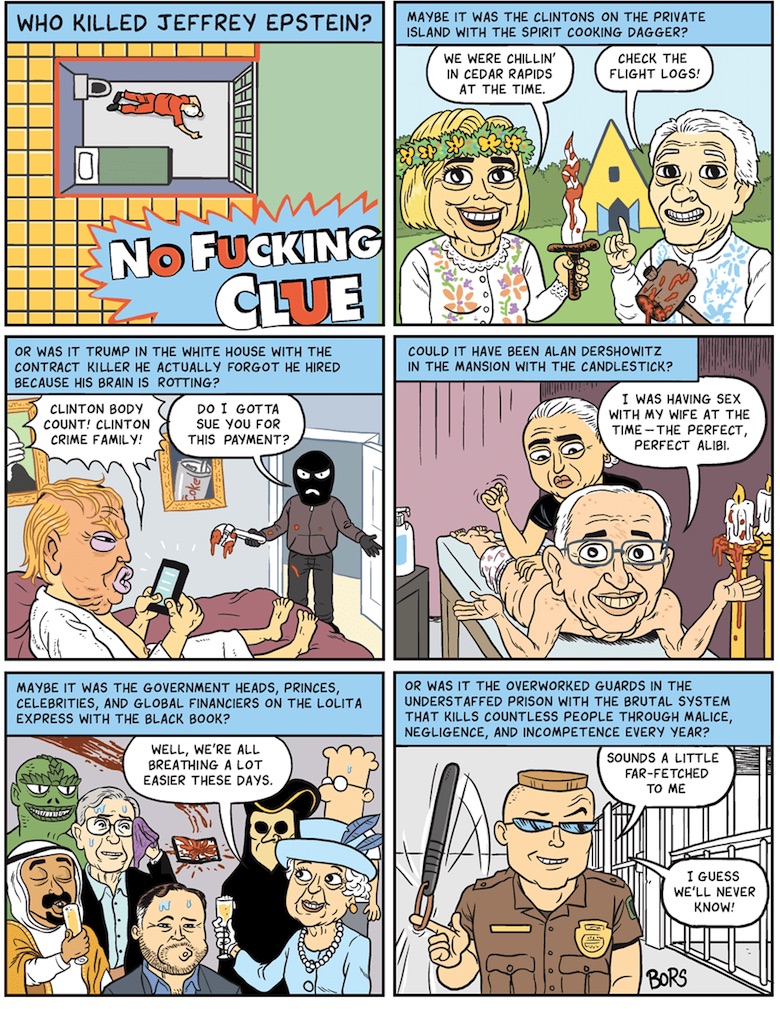