Rolling Stone magazine also had a good breakdown of each person’s performances in the debate.]

It seemed like Sanders and Warren both effectively batted down the attempts by the others to describe their platforms as unrealistic. Apparently Delaney’s campaign slogan is “No, we can’t” and he kept butting in a lot with his naysaying until he got a severe slap down from Warren. Watch.

Meanwhile Sanders gave Ryan a swift rebuke when Ryan tried to imply that Sanders did not kow what the Medicare for All proposal contained, to which Sanders replied, “I wrote the damn bill!”

There had been some concern among progressives that Sanders and Warren might attack each other in pursuit of the progressive vote but that did not happen. In fact, the idea that the two are appealing to the same set voters may be incorrect. An analysis of the polls suggests that their respective constituencies complement each other rather that overlap.

Sanders also has won over more African Americans than Warren: He earns a greater share of support from black voters than any candidate in the race except for Joe Biden, according to the latest Morning Consult surveys.
…

The fact that Warren and Sanders’ bases don’t perfectly overlap hasn’t garnered much public attention, but it’s something very much on the minds of their aides and allies.

“It shows that the media does not base their perceptions on data that is publicly available,” said Ari Rabin-Havt, chief of staff to the Sanders campaign. “I think people develop overly simplistic views of politics that presume that people who live in the real world think the same way as elite media in D.C. and New York.”
…

With Biden still atop most polls, even after a widely panned performance at the first Democratic debate, some progressives still fear that Warren and Sanders could divide the left and hand the nomination to the former vice president.

“There’s a lot of time left in this campaign,” said Sean McElwee, co-founder of the liberal think tank Data for Progress. “But one thing that’s clear is that it’s very important for the left that we ensure that we don’t split the field and allow someone like Joe Biden to be the nominee.”

Another analysis looks at the difference between those voters who want big changes and those who want to go slow..

Fifty-four percent of Democratic primary voters say they prefer a nominee who proposes larger-scale policies that might cost more and be harder to pass — but could still result in major change.

Among these voters, Warren leads the pack (at 29 percent), and she’s followed by Bernie Sanders (18 percent), Biden (16 percent) and Kamala Harris (14 percent).

By contrast, 41 percent of Dem primary voters say they want a nominee who pushes for smaller-scale policies that cost less and might be easier to pass — but that bring less change.

And among these voters, Biden holds a substantial lead (at 35 percent), followed by Harris (14 percent, Warren (8 percent), Pete Buttigieg (8 percent) and Sanders (7 percent).

It is curious how Republicans campaign by appealing strongly to their base while some Democrats seem to think that the best strategy is to abandon their base and appeal to some mythical voter who is looking for a wishy-washy candidate. This cartoon by Jen Sorensen accurately captures the problem with this so-called ‘appeal to moderates’ strategy. 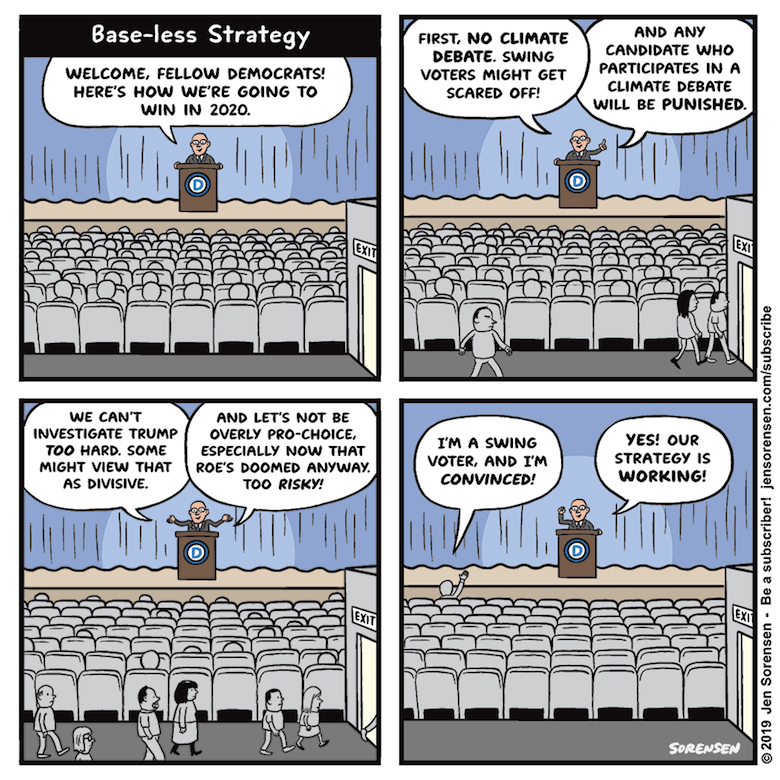