The race is on to determine who will become the leader of the Conservative party and thus the next prime minister of the UK and get to preside over the end stage of the Brexit shambles. Jonathan Pie handicaps the race between the ten contenders who qualified to be in the running.

In the first round of voting yesterday by the 313 Conservative members of parliament, Boris Johnson won handily and three failed to get the 17 votes needed to proceed to the next round and so were eliminated. Among the losing three was Andrea Leadsom who was the finalist with Theresa May for the leadership the last time three years ago but withdrew after being criticized for suggesting that as a mother she was better suited for the job than the childless May. 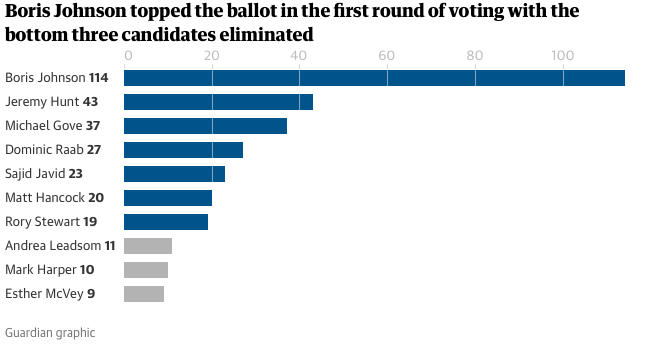 Another ballot will now be held next Tuesday, with further rounds to follow on Wednesday and possibly Thursday, until the field is narrowed to two. Their names will then be presented to Conservative members in a postal ballot, with the winner due to be announced in the week of 21 July.
…

[Theresa] May will remain in 10 Downing Street until her successor is chosen, at which point her three-year tenure as prime minister will come to an end.

Now there are rumors of attempts to form an anti-Johnson alliance in an effort to deny him the leadership. It is reminiscent of the efforts of the Republican party leadership in 2016 to stop Donald Trump from winning the party nomination.

Lying to the bitter end » « So many things wrong here