The evolution of whales is one of the most fascinating stories in evolution because it goes in the opposite direction to the conventional story, of a land animal becoming a water-based one. The outlines of this have been pretty well established but now comes a report of the discovery of a new fossil of a large whale with four large legs that showed it to be capable of life on land and sea. 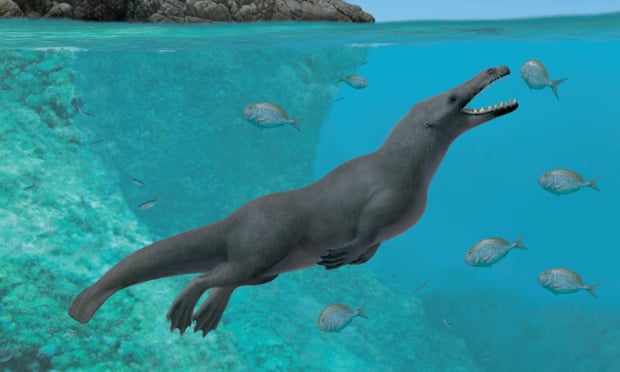 The giant 42.6m-year-old fossil, discovered in marine sediments along the coast of Peru, appears to have been adapted for a semi-aquatic lifestyle. Its hoofed feet and the shape of its legs suggest it would have been capable of bearing the weight of its bulky four metre long body and walking on land. Other anatomical features, including a powerful tail and webbed feet similar to an otter suggest it was also a strong swimmer.
…

The latest specimen proves that early whales could swim for days or possibly weeks at a time while retaining their ability to rove around on land.

“Even though it could swim in the water [with] no problem, it still had little hooves on its fingers and toes,” said Park. “It’d be a lot more capable than seals at getting around on land.”

Its sharp teeth and long snout suggest the early whales may have eaten fish or crustaceans.
…

According to Lambert, it is likely that whales would initially have had to return to land for certain activities such as mating and giving birth to young. The first fully aquatic whales date to around 41m to 35m years ago, filling an ecological niche left vacant when the last marine reptiles – along with the dinosaurs – went extinct 66m years ago.

Note that this fossil was actually found in 2011 but the report released only today. It is common practice in archeology and paleontology for new fossil discoveries to be kept under very tight wraps while the painstaking task of completely excavating and analyzing goes on and they are ready to go public.

Here’s an animation of the evolution of whales.