Just yesterday the Guardian published a flow chart about the options available to prime minister Theresa May when, as was expected, she resubmitted the Brexit deal that was defeated by a margin of 149 votes for another parliamentary vote, presumably hoping that a sense of desperation due to the looming deadline of March 29 might persuade enough people to switch their votes in favor of it to avoid a no-deal Brexit. 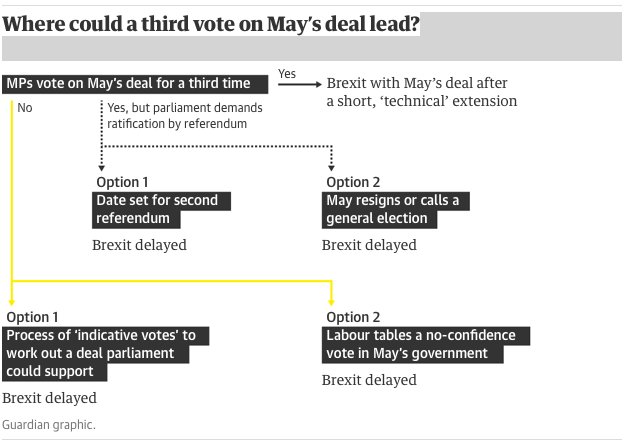 But that hope was dashed when today the speaker John Bercow said that she could not bring a deal that was the same or not substantially different from the one that was heavily defeated earlier. This has sent shock waves through an already turbulent system.

Here is Bercow announcing his pre-emptive finding. (I just love listening to this guy speak!)

She cannot substantially change the deal without having discussions with the EU and it is unlikely that they will agree to major changes at all, let alone at such short notice.

So that means the answer to the first box in the above flowchart is ‘No’. It looks like the only option left is to buy more time with an extension. In theory, the EU could refuse to grant one, triggering a no-deal exit. But even if, given that the UK has had two years to deal with this problem and still cannot arrive at a deal that parliament can pass, they think that no purpose would be served by granting a short extension, they will likely grant it merely to avoid playing the role of the heavy.