The Republican war on logic and math continues with this Venn diagram produced by losing governor Scott Walker to try and persuade people that the legislation passed by the lame-duck legislature and signed by him stripping the incoming Democratic governor of some powers was not a blatant anti-democratic act.

I will give $100 to the first journalist who asks Walker if he was too intimidated to announce this in Madison. $200 if you also ask him to define what a Venn diagram is. https://t.co/WaJDwSo4CP

This graphic from The Progressive magazine compared Walker’s idea of a Venn diagram with how it should actually be used. 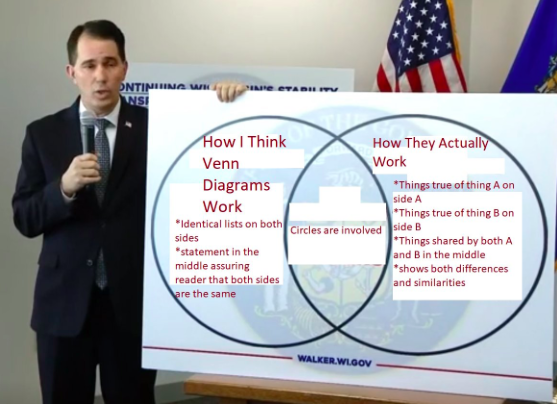 Don’t these people have aides who have at least some basic knowledge and can stop them from embarrassing themselves?