October 10th was the World Day Against the Death Penalty. One of the most encouraging signs is how the use of the death penalty is declining around the world. According to Amnesty International, “142 countries have either abolished the death penalty in law or in practice and that in the past five years 33 countries have carried out at least one execution.” In 2017, just 23 countries out of the 193 member states of the UN executed someone.

Of the countries that execute people, China is by far the worst. Its actual numbers are a state secret and can only be estimated. 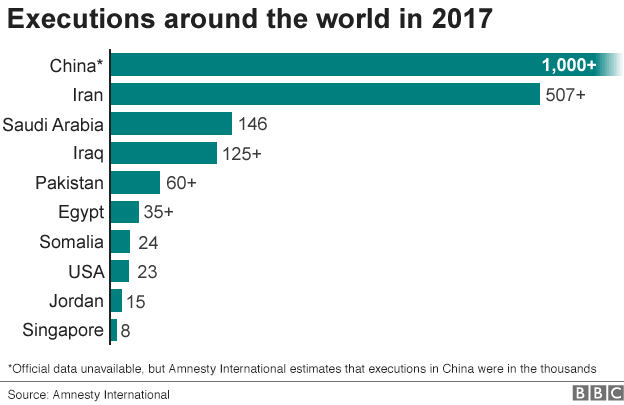 This map of countries that have carried out executions in the last five years is interesting. 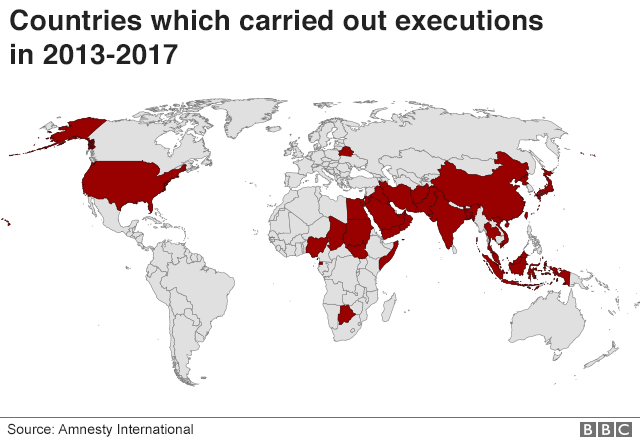 Belarus is the only country is Europe to still have the death penalty. The record of Africa is one of slow improvement with 20 countries in Sub-Saharan Africa having abolished capital punishment.

Asia has a dismal showing. My country of origin Sri Lanka still has the death penalty on the books but has not executed anyone since 1978 though people have been sentenced to it. But the current president seeks to execute 19 people for drug-related offenses and Amnesty International is urging action to stop this reversal to a barbaric practice.

“By resuming executions after more than 40 years, Sri Lanka will do immense damage to its reputation. The government must immediately halt plans to carry out any executions, commute all death sentences, and establish an official moratorium on the implementation of the death penalty as a first step towards its full abolition,” said Dinushika Dissanayake, Deputy Director for South Asia at Amnesty International.

“Sri Lanka has been a leader in the region, with an enviable record of shunning this cruel and irreversible punishment at a time when many other countries persisted with it. Now, when most of the world has turned its back on the death penalty, it risks heading in the wrong direction and joining a shrinking minority of states that persist with this horrific practice.”

The US is only country in the Americas to still have the death penalty. Within the US, the supreme court of the state of Washington outlawed the death penalty just this past week, making it the 20th state to abolish it. Still a long way to go.