What kind of person would want to own a house that is an architectural nightmare and has three bedrooms, 10 bathrooms, three kitchens, eight dishwashers, 13 porches, and an elevator? The same kind of person who would own 10 yachts, because the goal of such people is ostentatious wealth. Yes, we are talking about the Betsy DeVos, the education secretary who has been working to undermine public schools. This is merely her summer home, somewhere that has easy access to her summer yachts. 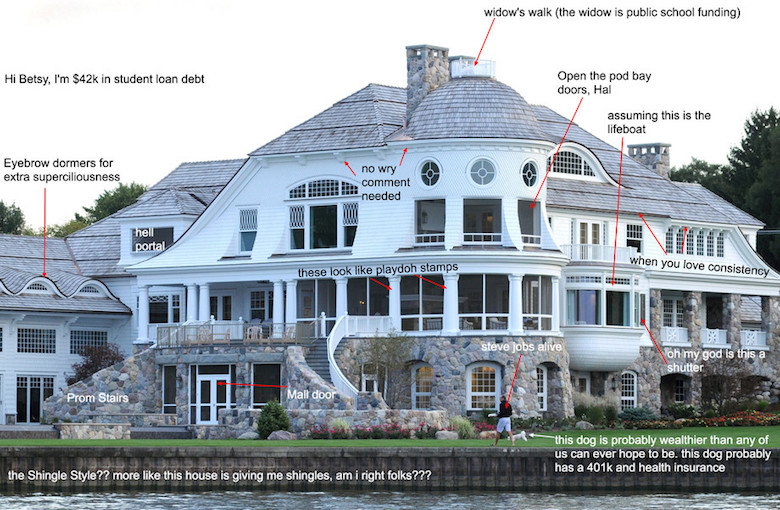 Kate Wagner dissects this monstrosity of a home as part of her series on McMansion Hell, house that are an abomination in almost every respect, architecturally and socially. Wagner provides the answer to the question posed in the title as to what kind of person would own such a house.

In America, the rich get richer, and the poor have to beg the federal government to forgive the debts they owe to predatory for-profit colleges run by the rich who keep on getting richer. What do the rich do with all their money? Build horrific monstrosities with eight dishwashers and dismantle the public school system.

Architecture is never a vacuum. This house sucks, but like all buildings, it is a reflection of both the people and the broader culture that make building it both possible and desirable. Those, too, irrefutably suck.