PZ at Pharyngula recently alerted me to what happened to Chrys Stevenson when she pointed out to the people on a Facebook group that is called Atheist Safehouse that claims to have 42,4114 members that their page featured a montage of eight atheists, all of whom were male and only one was non-white. 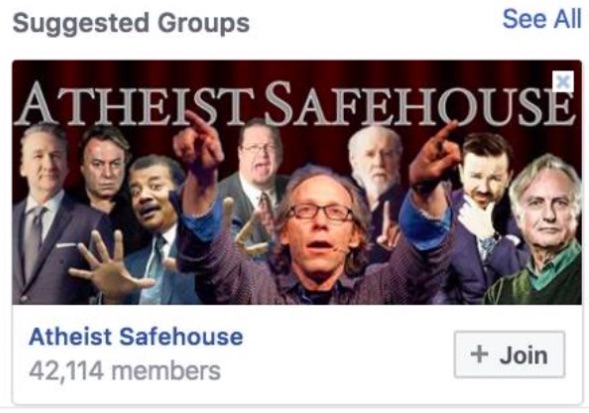 She suggested that they might want to make the image a little more inclusive. She promptly got banned from the group because apparently raising the issue of the photo alone is sufficient to get you banned!

Would such an image encourage you join the group? As I pointed out in a comment on the post by Chrys,

Apart from the major flaw that you so clearly pointed out, I was also struck by the fact that even given a mindset that accepts that having only men is not a problem, the photo itself is ghastly. Surely something advertising itself as a ‘safe house’ would be accompanied by a welcoming image? This photo is like something created for a ‘scare house’.

We have Hitchens glowering, Maher with his patented smugly superior look, Tyson looking as if he’s seen a ghost, Teller yelling, and Krauss right in front doing who knows what, perhaps calling on Yahweh to smite all the women who have said that he abused them? Not a single friendly, welcoming smile to be seen among the lot.

(Note: I misidentified Penn as Teller.)

But then a moderator from Atheist Safehouse named Brad Hoschar chimed in and said that the reason Chrys got banned was not because she raised the topic of the photo but because (I kid you not) she did not speak politely!

I’m an admin of that “sausage-fest” FB page. Although it wasn’t me who banned you, I can tell for certain that it was the way you came across bringing this to our attention that got you banned, not for posting this in the first place. as with anything in life you catch more flies with honey than you do with vinegar. And let me tell you and the OP lady, you reek of apple cider.

This, not surprisingly, did not go down well.

Why is it so hard for people to think in inclusive terms? We are all prone to sometimes act without thinking things through (I know I have been guilty many times) but when it is brought to your attention, the reaction should be to slap your forehead and say “Dammit! How could I have not noticed this?” and vow to do better next time. Why is it so hard to simply admit the error and correct it?

Chrys’s post and the entire comment thread is worth reading. In it Anne Chant provided a list of 81 famous women atheists who could be included in a photo montage and there were many I was not aware of. One of them was Audrey Hepburn, one of my favorite actresses with whom I was in love from when I was a young boy, from the first time I saw her in films. Who wouldn’t want to have her be part of their group?

Yet another rabbit hole to avoid » « The overlooked danger of overhydration