A few months ago, I called out a couple of atheist Facebook pages. I wasn’t a member of either “Atheist Safehouse” or “The Thinking Atheist Fanpage”, but stupid obnoxious Facebook kept pestering me with suggestions that I join them…and I’d tell it “no!”, it would leave me alone, and then a few weeks later it would start up again. I was annoyed.

The reason I wasn’t interested was that they advertised themselves with a photomontage of Famous Atheists, you know, the usual suspects, some of whom I’d rather not ever meet again, and they were almost all men. It was just stunningly bad advertising, for one, since they were clearly aiming at a target demographic that was rather narrow, but it was also shallow and cult-like. It was too much trouble to portray an idea or a principle, so hey, let’s just make it clear that we’re a boys’ club and that we adhere to a dogma promoted by these modern prophets.

As I said, I didn’t join, for obvious reasons. But what if someone did join? Atheist Safehouse apparently has over 42,000 members, and is one of the biggest special interest groups in Facebook atheism. And what if they were a woman? And what if they pointed out the sexism of their advertising?

The equal representation of women in public and private spaces matters. It matters because saving women’s lives and maximising their wellbeing requires a tectonic cultural shift in our society that starts with recognising women’s contributions. It is, frankly, inconceivable that a group which prides itself on intellect and reason would choose a composite photo showing eight men – mostly white – to represent its mixed-gendered membership of 42,114 members.

I joined the group last night in order to comment. Naively, I thought it would be a simple matter of drawing the issue to the attention of the admins and getting the photo changed.

(Note: the one non-white man in the photo is Neil deGrasse Tyson, who is not and does not want to be associated with movement atheism at all. It would be nice if people would at least respect that. But at least he gets to join Charles Darwin in the list of scientists uncomfortable with atheism who get coopted anyway.)

What she discovered is that, rather than make a simple change to the profile photo of the group, they have rules that you’re not allowed to talk about the photo. They have encountered this complaint so many times before that the regulars were bored and predicted that the suggestion would be squashed…and it was.

If an atheist group of 41,114 (41,112 members now Cushla and I have been booted) cannot take the simple step of removing a single photo and replacing it with a more representative image, what hope is there that atheism can be rescued from the grip of the immature, socially inept, MRA man-babies who seem to have colonised the movement.

They use a photo of 8 famous atheist men to illustrate their “Atheist Safehouse”: two of them are dead, two, maybe three, are libertarian jack-offs, one is under investigation and has lost his prestigious position for sexual harassment, and one doesn’t want anything to do with the atheist movement. They refuse to even consider changing it.

I can maybe see their point. One could argue that the picture is a fair and honest portrait of the atheist movement today, so they’re just practicing truth in advertising. 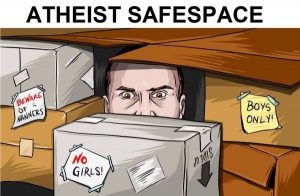 Andrew Sullivan makes Sarah Jeong’s point for her — how kind! » « Lawrence Krauss replaced by a woman