Classical liberalism, as articulated by one of its key proponents John Stuart Mill, was based on general principles that prioritized the freedom of the individual over state and social control. But modern-day liberalism seems to be based more on a set of attitudes on certain issues rather than grounded in deeper principles. This is especially true in the US. Liberals in the US are in general supportive of LGBTQ and women’s rights, affirmative action, and so on but they tend to not be consistent on their attitude towards the national security state and wars and human rights in general.

This can result in some wild swings in attitudes on specific issues. For example, because liberals saw the election of Barack Obama as a genuine advancement in civil rights in the US, which it undoubtedly was, they tended to give him underserved passes on the horrendous things he did, such as his drone killing program, his massive deportation program of undocumented immigrants, his vicious war on whistleblowers, his coddling of Wall Street criminals, and his refusal to prosecute those who committed torture, to name just some.

Indeed, I see evidence that certain liberal principles, the ones that impressed me in the Seventies, have eroded. Back then, for example, the CIA was understood to be a nest of liars and psychopaths who toppled democratically chosen leaders, lied to the public to start wars, and ran sick experiments on innocents using drugs and mind-control techniques. In Three Days of the Condor, a thriller from the period, Robert Redford plays a lowly CIA officer who discovers that the agency is nothing more than a crime ring. These days, however, with Trump playing the heavy, the CIA is revered by many liberals as a bulwark of integrity, its missions sacred, its conclusions unimpeachable, and its former director, John Brennan, worthy of a high-profile cable news job. The FBI draws similar adulation, never mind its history of spying on the likes of Ernest Hemingway, John Lennon, and Martin Luther King Jr.

This great liberal switch from skepticism to sanctimony about the most powerful arms of the Establishment is matched by a viral fear of Russia that reminds me of the John Birch Society pamphlets I’d come across now and then when I was young.

All that is fine. But he precedes this with an anecdote to illustrate what he sees as a disturbing shift in tone among liberals, from good-humored tolerance of dissenting views to shrill and harsh criticisms of anyone who happens to disagree with them. He describes an encounter with someone named Kitten Holiday (a pseudonym of course) who told him of her own journey from being a self-described liberal feminist to someone who voted for Donald Trump. Her story is illustrative, but not in the way that Kirn intends. Take for example, how Holiday describes her liberal roots.

“I used to be a real lefty,” she began. She grew up in a large Northeastern city, a child of the upper middle class who often found herself clashing with the authorities at her stuffy private school. She reveled in Dada art, beat poetry, and absurdist theater, writing plays in the manner of Pinter and Beckett. She continued her education in Portland, Oregon, at the famously liberal Reed College.
…

Though Holiday considered herself a liberal (“I was on the ‘coexist’ team”) and held impassioned environmental views that she’d promoted on an earlier blog (“I crusaded against plastic bags and all things plastic and taught how to pack a perfect lunch for kids that wouldn’t cause any waste”), certain readers began to attack her as a reactionary. She hadn’t expected this treatment.

What she describes as being ‘liberal’ and ‘lefty’ are a set of attitudes and behaviors that are mildly unconventional and challenging of her immediate authority figures but not grounded in any deep principles. What happened to her when she was criticized from the left because of certain positions she took later in life on her blog is illustrative.

Holiday was shocked. “I’d thought that I was protected as a feminist, but then I started to realize feminism wasn’t what I’d always thought. It wasn’t about lifting women. It was about lifting certain women.”

When Trump appeared on the political scene, Holiday was immediately drawn to him. She liked his defiant, outsized individuality, his bluntness, his sarcasm, and his preposterous hair. [My italics-MS] Though a Democrat, she saw in Trump the unconventionality that she’d cherished in her young self but now felt she was paying a price for, thanks to scolding liberals whom she’d once assumed were her natural allies. When she socialized with Trump folks, though, she felt accepted and welcomed unconditionally. Her ideas about starchy, stiff Republicans quickly disappeared. She loved this movement.

Holiday is now firmly encamped within the Trump fold.

These days, Holiday has all new friends, she told me; the old ones wanted nothing more to do with her. She tried to sound chipper about it, but I could tell she was still hurt. “Everything my liberal friends used to claim to love about me-my curiosity, my openness, my willingness to associate with all kinds of people, they started shaming me for. One lady came to me accusingly and said that I was so closed-minded and if I’d only talk to other kinds of people, I’d see how wrong I was. But I said, I already did that-that’s why I switched.”

The italicized portion above captures, I think, a great part of Trump’s appeal. Many in his base like him precisely because of his preposterousness. The fact that he is causing great confusion and uncertainty among the political and media establishment suggests to them that he is a threat to the establishment, that he seems to be ‘sticking it to the elites’, without pausing to consider that he is doing no such thing but is actually sticking it to them. Outrageous statements are seen as truth telling and unconventionality as radicalism.

The argument of the so-called moderate’ and ‘centrist’ elements of the Democratic party is that the party should focus its efforts on winning the allegiance of these Trump supporters by not taking radical stands on the issues but instead adopt soothing business-friendly policies, which not coincidentally is also what their corporate donor base wants. But what the progressives are saying is that what we should offer these people is genuine truth telling and truly radical politics that really does ‘stick it to the elites’, not the faux variety peddled by Trump.

Kirn is one of those people who seem to think that liberals are to blame for pushing people like Holiday into the Trump camp by harshly criticizing them. If we had simply treated her gently, she might still be part of the liberal fold. I do not find this convincing. Of course we should not be abusive and get carried away and hurl pejorative labels willy-nilly. But we should not be silent in the face of social injustice either. Is it really the case that calling out someone for saying and doing things that are racist or bigoted or homophobic or xenophobic results in them deciding to be even more so, even if they were not so before? I doubt that someone who believes in social justice will abandon those values just because of criticisms of certain specific actions or words. The people who react angrily and decide to adopt the reactionary program in its entirety will be those who, like Holiday, simply had some unconventional views that were seen by them as radical but were not grounded in any deep principles or values.

As usual, cartoonist Tom Tomorrow captures is a few panels what it took me this whole essay to say. 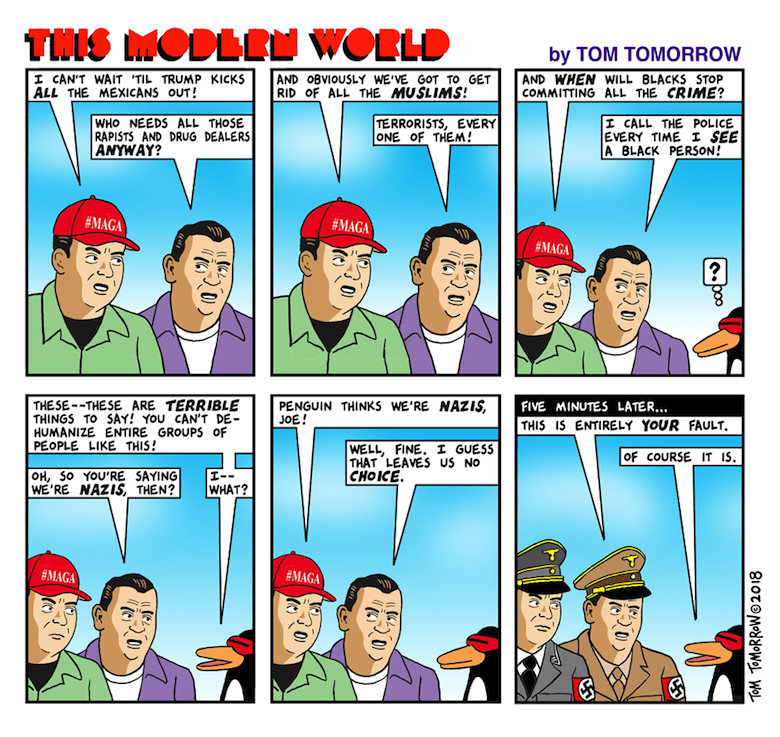