Siblings Lauren and David Hogg, both students at the Parkland high school where 17 students were killed, were on CNN after the rally being interviewed by Alyson Camerota. Just watch the interview and you will be impressed by how skillfully they countered Camerota’s repeated suggestions that they tone down their rhetoric against politicians and the NRA so that we can all ‘come together’ to solve the issue, the bogus ‘kumbaya’ bipartisanship rubbish that mainstream media love to promote as a means of maintaining the status quo. She was quite condescending in the way she spoke to the Hoggs, treating them as if they were naïve about political realities. They were having none of it and quickly shot down her suggestions using cogent arguments. It should perhaps be noted that Camerota used to work for Fox News before shifting over to CNN.

Camerota wondered if the students weren’t being too hard on Florida senator Marco Rubio whom they have derisively targeted as being a pawn of the NRA. She did the usual insider journalism thing where she says she has heard that Rubio has been nice to families of victims and is working behind the scenes to pass legislation containing some minor improvements. They responded that as long as Rubio is bought by the NRA, he will not do anything meaningful. I think that they are exactly right. You need to target and defeat a prominent person on this issue and Rubio is exactly the right choice because not only is he from Florida but he is craven and has a history of caving under pressure. They also dismissed Rick Santorum’s absurd suggestion, that their time would be better spent learning CPR than getting engaged with the voting process, with the contempt it deserved.

The students emphasized that they are not letting up and have other projects in the works such as on April 7 they are calling for town halls in each congressional district and if the elected representative does not promise to show up, they are going to invite his or her challenger. It will be interesting to see how many congresspeople and senators who are captives of the NRA will have the guts to show their faces. Florida will be interesting given the hammering that Rubio and NRA spokesperson Dana Loesch got from 7,000 attendees following at a similar event last month. This cartoon captures what must be going on. 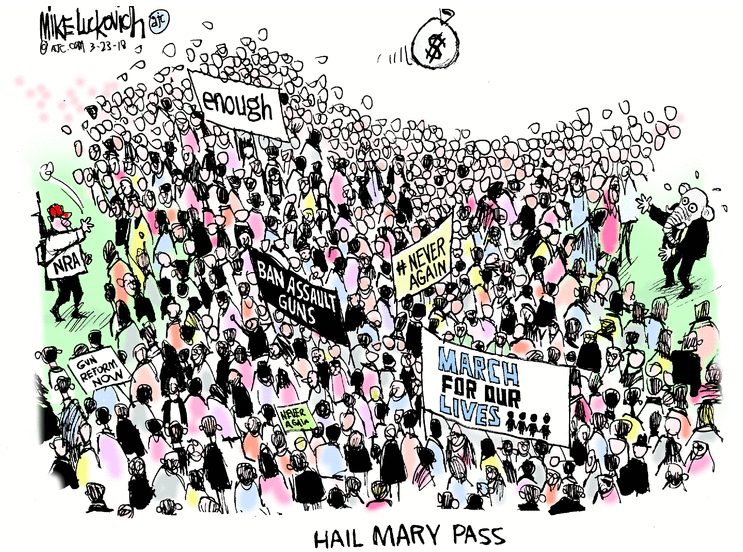 There is also a National School Walkout Day on April 24th.

Starting at 10 a.m. students will gather outside, where 17 seconds of silence will honor the victims in Florida. After that an open mic will commence where students can have their voices heard. This is a time for listening. After that the schedule is up to you and your school. Lane Murdock’s High School has a specific list of events being planned for that day. That will also be shared if you want inspiration.

These students are really politically savvy.

Stephen Colbert on the 60 Minutes interview » « I got suckered yet again into watching TV, dammit!