I came across this interesting blog post by someone named Jaybird (whose gender is not specified and I will refer to as a ‘he’) who had been a young-Earth creationist. He was taught that it was vitally important to defend the idea of a young Earth because that was based on a biblical chronology and if that was taken as metaphorical, then that would open the floodgates for thinking that everything, even the resurrection of Jesus, as metaphorical, and that would be the end of everything. He describes the rhetorical tricks that he was taught to enable people like him to defend that position and get the better of their more-scientifically-minded critics.

[T]hey trained a bunch of kids how to argue in service of Young Earth Creationism and they gave us a very interesting (to my mind, anyway) bunch of tools to use when we went out into the world to spread the word.

The main thing that they taught us was that most people don’t know a whole lot about biology. Most people just take what is taught them and they regurgitate it for a test in the classroom without ever thinking about what they’ve regurgitated.
…

We had to learn, by memory, the differences between (deep breath) Piltdown Man and Nebraska Man and Java Man and Peking Man and we had to have these facts at our fingertips. (Keep in mind: This was before Smartphones were a thing.) We had to be able to argue this stuff at a moment’s notice because . . .

Well, the people we were arguing against usually weren’t that well-versed in it. They took a year of biology in high school and they probably memorized stuff just long enough to get past the test and then promptly forgot it.
…

Ask them questions about “how come your professors never told you about Nebraska Man?” (and never mind that the answer was “they had to cover everything from the Krebs Cycle to Photosynthesis to Reproduction to a section involving dissecting a (not yet extinct) fetal pig and there wasn’t really time for that sort of thing if there were only 175 days of school”.)

One interesting thing was that they were told that they were not interested in their critic so much as whoever was observing the exchange. (This is something that I agree with. It is the audience that you should target, not the person you are arguing with.) They were taught to try and get under the skin of their opponents and make them angry. Why? Because science and scientists are supposed to be cool and rational. If you can remain cool and calm and your opponent got angry and emotional, then you came out appearing as the ‘scientist’ in the eyes of observers.

Over and over again, it was reiterated to us that it wasn’t just about the person with whom we were arguing. There would be people watching and it was our job to present identically to how stereotypical scientists: calm, cool, collected, tons of information at our immediate recall, and the ability to withstand some angry person yelling about how they were told something different by people they trusted implicitly.

In order to achieve this, they are given various bits of information such as old controversies, the times when the scientific community made errors, and esoteric facts to unsettle the opponent. The so-called Gish Gallop is the model they adopt. See this article for what the Gish Gallop is and how to prepare for it and counter that maneuver and not get frustrated.

This cartoon by Joe Heller shows how scientists should not respond. In this case the opponent is a climate change denier but the principle is the same. 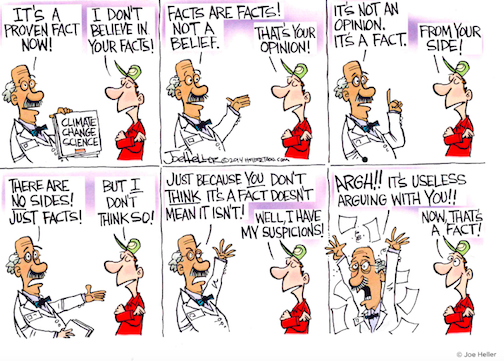