The news that John McCain was diagnosed with brain cancer seems to have given people another bout of selective amnesia, resurrecting once again old tropes about his courage and goldarned maverickyness. His performance yesterday on the senate floor lamenting the lack of deliberation and bipartisanship in the workings of that body was immediately followed by voting in lockstep with his party leadership to ram through a motion to debate Obamacare even though senators did not even know what bill would be brought to the floor. All we can be sure of is that whatever legislation that is brought to the floor will deprive tens of millions of poor and middle class people of affordable health insurance and benefit the rich because that is the Republican dream. In other words, he voted to start the process to deny ordinary Americans the kind of health care that is keeping him alive, courtesy of the taxpayers. How brave and mavericky!

Drew Magary, who long ago bought McCain’s shtick, now regrets doing so and sums up the real McCain

[O]ver the course of this century, McCain has dined out on his reputation as The Good Conservative. He’s the senator who gives thunderous copy to reporters, and does SNL, and issues bipartisan reports on the military giving the NFL promo money, and does the occasional cameo on Parks & Rec. He fulfills every Brokawian wet dream certain members of the press still have about politicians setting aside their differences and doing the RIGHT THING, by God.

Today, Senate Republicans moved one step closer to dismantling Obamacare, potentially leaving millions of people uninsured, jacking up their premiums, and letting insurance companies cover only what they feel like covering. John McCain voted for that bill because of course he did. He has always been a big talker, but when it comes to the actual meat-and-potatoes voting process, he falls in line. He didn’t do the right thing. He didn’t even come within 500 yards of doing the right thing. For the past two decades, he has never done the right thing. He’s a fraud. Alex Pareene had him nailed ages ago. In fact, it’s “nice” Republicans like McCain who provide cover for evil swine like Mitch McConnell, allowing them to gut the American security net and fuck over anyone who doesn’t live behind an iron gate.
…

Everyone should realize that John McCain is the perfect American lie, a man who professes to be noble and fair and just while being none of those things. He served his country honorably in combat, but in no other fashion. And he serves out his time in the Senate, and here on planet Earth, as a pathetic enabler. Never the lion; always the sheep. For seventeen years, gullible people have been waiting for him to make his face turn, to make some grand defiant move for the sake of God and country. But that was always just clever branding on his part, and today should serve as a cold slap in the face to anyone who still thought he might have that kind of political courage left in him. He’s a fucking disgrace.

Given that McCain must know that he has not long to live, this would have been the perfect time to stand up for what he says he believes. But he acted like the true McCain, a shameless and weak panderer who has never stood for anything except that which serves his own interests and will get him good press coverage.

The whole piece is worth a read as we watch journalists and politicians who know better fawn over this fraud. 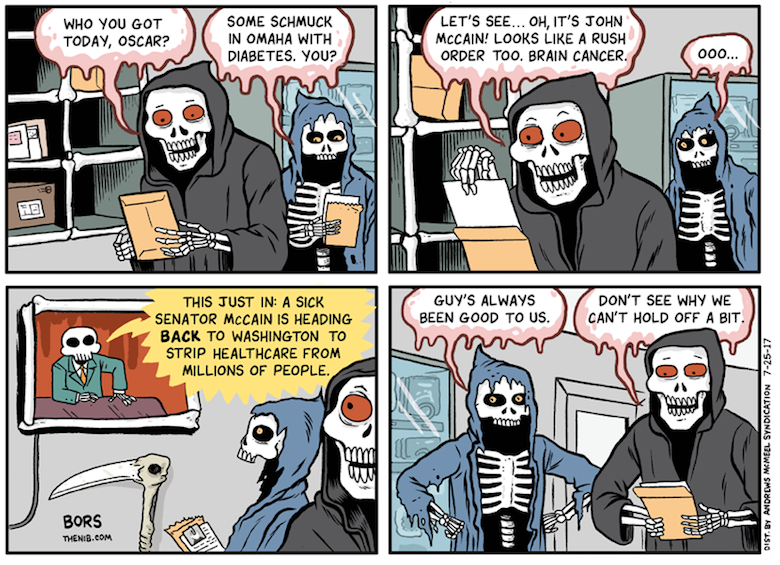