The Book of Revelation is something that biblical scholars have been trying to interpret for centuries. As with all such documents that consist of a nutty blend of grotesque and vivid but opaque imagery, it provides plenty of opportunities for imaginative people to come up with fanciful scenarios. The usual Christian view is that it portends what will happen in the so-called End Times when Jesus returns and metes out bloody justice.

But now comes a different interpretation that says that the book is more like an astrological chart that laid out what the past 2,000 years would be like.

YiChen, the author of the book “Revelation Fulfilled”, pointed out that, unlike most people believed, the Book of Revelation is not about the disasters at the End Time but about the major historical events in the Christian history in the last two thousand years.
. . .

In his book, Revelation Fulfilled, YiChen identifies the historical events prophesied in the Book of Revelation, including the Roman Emperor Constantine the Great converting the Roman Empire to Christianity, the rising of Islam and the expansion of Arabic Empire, the wars of the Crusades and plagues in the Dark Age, the Inquisition and religious persecution, the Renaissance and Reformation, the French Revolution and Communist Revolution, the “Red Dragon” and the “Great Eagle”, the “September 11” and the War in Iraq, and the current turmoil in the Middle East, etc.

These two cartoons from Jesus & Mo provide the best response to this kind of nonsense. 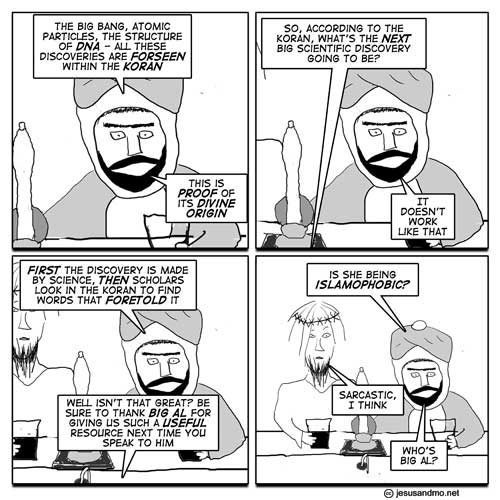 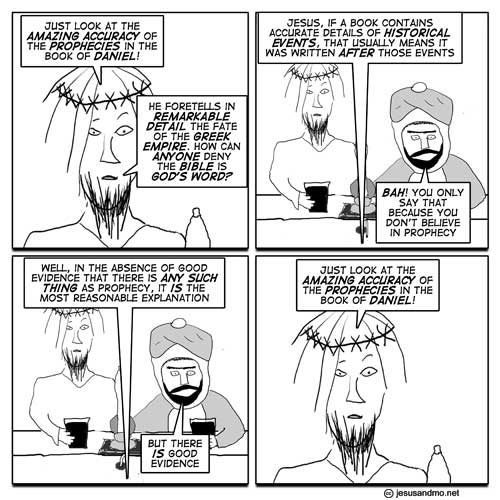 All hail the Dear Leader! » « Why did Qatar suddenly become the new enemy?