I continue my almost unbroken record of being wrong when it comes to predicting the results of elections but in this case I am really pleased by it. Theresa May and the Conservatives were expected to increase their majority to between 50 and 100 seats. Instead, they have lost their majority altogether and now have just 318 seats, which while eight short of a majority still makes itthe single largest party. Jeremy Corbyn has surprised the pollsters and pundits by hugely increasing his party’s vote. The Conservatives now have 318 seats, while Labour has 261 seats, the Scottish National Party has 35 seats, the Liberal democrats have 12, and others have 23 seats with one still undecided (In 2015, the Conservatives won 331 seats with just 36.9% of the vote, while Labour won 232 seats with 30.4% and the Scottish National Party won 56 seats with 4.7%. The remaining 28% of the vote garnered just 31 seats spread over nine other parties.)

Exit polls issued immediately after the polls closed predicted Conservatives with 314 seats, Labour 266, SNP 34, Liberal Democrats 13, and others 18. That sent shock waves through the country but it looks like they got it fairly close.

The big losers were the Scottish National Party and Ukip and maybe readers who are from the UK can explain what happened. Voters from both groups seemed to go to the Conservatives more than to Labour. I can understand Ukip voters going that way but am puzzled by why the SNP lost so many seats and why the shift was to Conservative rather than Labour.

Voting turnout was 69%, 2% higher than in 2015 and the highest since 1997 and seems to have been driven by the enthusiasm of younger people for Labour and Corbyn.

The “youthquake” was a key component of Corbyn’s 10-point advance in Labour’s share of the vote – exceeding even Blair’s nine-point gain in his first 1997 landslide. No official data exists for the scale of the youth vote but an NME-led exit poll suggests turnout among under-35s rose by 12 points compared with 2015, to 56%. The survey said nearly two-thirds of younger voters backed Labour, with Brexit being their main concern.

The Conservatives have now gambled twice with elections in two years and lost both times. Prime Minister David Cameron got ousted with the Brexit vote and now May will likely face a challenge to her leadership because of her underwhelming performance. She gambled on running a US presidential style campaign centered around her slogan of being “strong and stable” which was widely mocked as “weak and wobbly” because of her lackluster performance. One good thing for her was that she won her own seat, beating a challenger by the name of Lord Buckethead, an “intergalactic space lord” who “enjoys planet-conquering” and “dominating inferior species”. Sadly, he got only 249 votes. 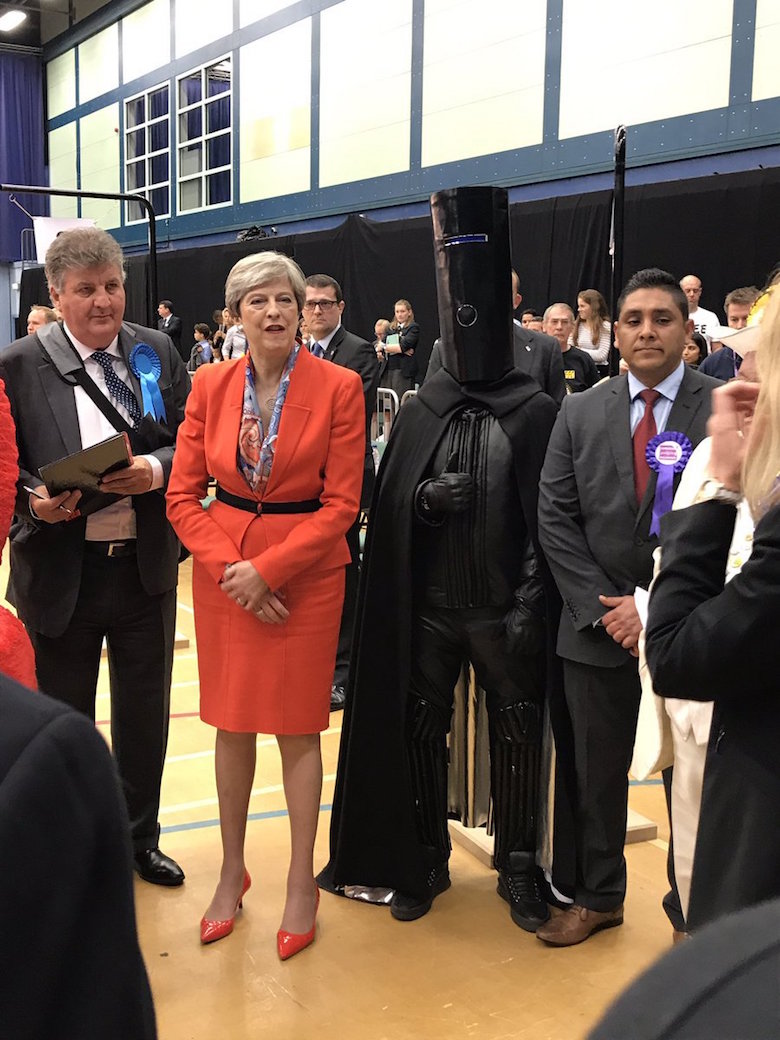 In an interview before the election where May was asked what was the naughtiest thing she had ever done, she replied that it was running through fields of wheat. That may now have to take second place to her decision to call a snap election. That anecdote also reveals that British interviews can ask the same type of silly questions that US interviewers ask, and British politicians are silly enough to answer them instead of brushing them off as not worth answering.

As the single largest party, the Conservatives will now have to try and cobble together a coalition to form the government but those things tend to be unstable and the UK may well see another election fairly soon. But next time, Corbyn will have the wind at his back as the neoliberal Blairites who constantly undermined him get sidelined and the media realize that he is a force to be reckoned with.

It looks like Corbyn, an old-fashioned progressive, has turned the party around in an astounding manner by giving British voters a real choice. The Democratic party in the US should take note. Being neoliberal Republican-lite like Hillary Clinton may win you some elections in the short time but is not the way to go for long-term progressive gains.