Yann LeCun is the director of AI research at Facebook and an expert on many aspects of deep learning. As such he receives many invitations to speak at institutions around the world. He recently received one from King Abdullah University of Science and Technology (KAUST) and here is his response. 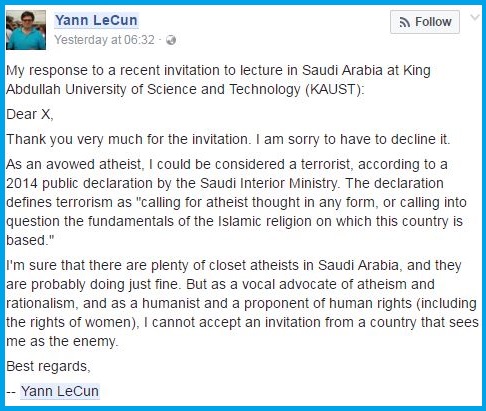 Naturally, there was pushback against his stand from various people on various grounds and he has responded to them point by point. LeCun recognizes that no government or institution is free from bigotry and to be totally pure would mean that he never accepted any invitation. One has to draw a line somewhere. But Saudi Arabia is a no-brainer. It is just an awful government.

The one argument that has at least some merit is the one that says that if he went there, he would be helping the moderates in that country. Again, a decision has to be made as to the merits of trying to achieve change by working within the system or to boycott. It depends on many factors, one of which is the perception of intransigence of the government. Saudi Arabia, like Israel now and South Africa during the apartheid era, have governments that have no intention of giving rights to the marginalized groups within them and so boycotting them (as was done to South Africa in the past and is now advocated by the BDS movement with regard to Israel) is a perfectly justifiable decision.

One of the critics made the inevitable ‘no true Scotsman’ argument and added the incredible claim that Islam “is the most tolerant religion”. One hears this from religious apologists of all stripes (Hindus, Jews, Buddhists, Christians, etc.) who are quick to disown the horrendous violent acts committed in the name of their religion and insist that only some kernel of their religious doctrine that advocates peace and tolerance is the true essence of their religion.

When large numbers of the followers of a religion, and even governments, reveal themselves to be intolerant and even murderous of those who profess other beliefs and assert that they are acting in the name of their religion and thus are the true believers and deserve praise for upholding its highest values, then the religions have to own up to the fact that there is something rotten in their religion that is driving this behavior.

(Thanks to Jeff at Have Coffee Will Write for alerting me to this and sending me the link.)