Andrea James writes about something that I have noticed and that is that reducing the number of lanes on a road, what is called a ‘road diet’, and replacing the lost ones with a center lane meant only for turning left, can produce many benefits, not the least of which is that it reduces the number of opportunities for accidents. 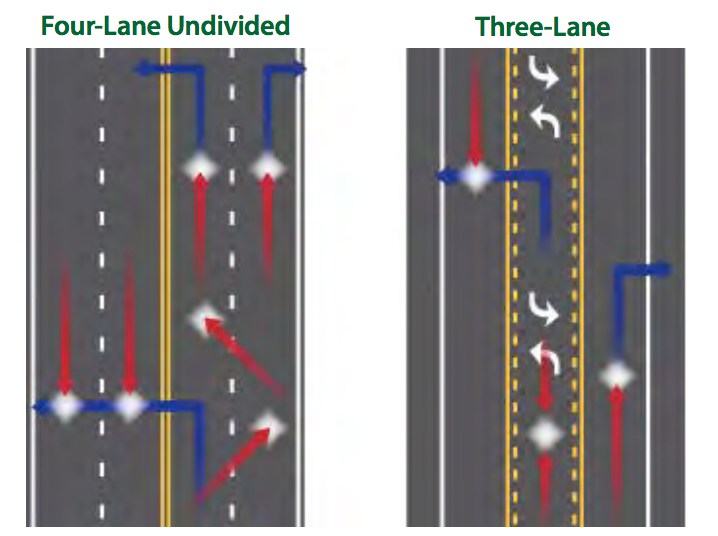 In Cleveland, Carnegie Avenue is a major artery that connects University Circle to downtown. It used to have three lanes going each way. I hated driving on it because the lanes were narrow and cars would be constantly changing lanes because of parked vehicles and the many intersections where left turns were possible and that had stopped traffic.

A few years ago, traffic engineers reduced the number of lanes to two each way with a center lane for turning left only. The reduction in the number of lanes from six to five enabled them to make the lanes a little wider. I now find it much pleasanter to drive on.

Other benefits are that with fewer lanes traffic moves more slowly and one has the option of creating bike lanes with the extra space. In my suburb, there were some residential streets where there was only a single marked lane going each way but the lanes were wide and even though the posted speed limit was 25 mph, you would have impatient drivers using the wide lanes to pass other drivers and thus enable them to go faster than was safe. Recently, traffic engineers have marked out a specific bike lane that takes up some of the width and this has resulted in no passing and much pleasanter driving.