The belief that “if you built it they will come” has not worked for the modern Mattala Rajapaksa International Airport (HRI) airport that was built by the Sri Lankan government in the southern part of the island at a cost of over $200 million that has just one daily flight and one weekly one. This article explains what happened.

Hardly anybody goes to Sri Lanka’s Mattala Rajapaksa International Airport (HRI) because they have a flight. No, the air transport hub is currently a daily flight or two away from being completely defunct, and the people who do go there tend to be tourists making a side trip from the nearby wildlife parks to see the stunning, fully modern airport in the middle of the jungle for themselves.

I arrived at HRI, which is located in Sri Lanka’s southern Hambantota district, in the mid-morning to find a group of tourists huddle together in front of its passenger terminal. I asked them why they wanted to visit an empty airport.

“It is a really beautiful building,” one of them told me matter-of-factly.

This airport is a landmark, a sign of progress in this region of Sri Lanka, which is located in a forested area a 250 kilometer drive from Colombo. The airport has a 12,000 square meter terminal building, 12 check-in counters, two gates, a runway long enough to handle the largest commercial jets, and capacity for one million passengers per year.

Other than that, everything looked as an airport should: the information booth was fully staffed with three sharply dressed young women, security guards were at their posts, cleaners were scrubbing the floor, the souvenir shops glistened, and a small cafeteria had a cook and a cashier dutifully at work. This airport was fully in service, despite the lack of a viable reason for it to be.

The article has many photographs of the gleaming new airport such as this one of a waiting area. 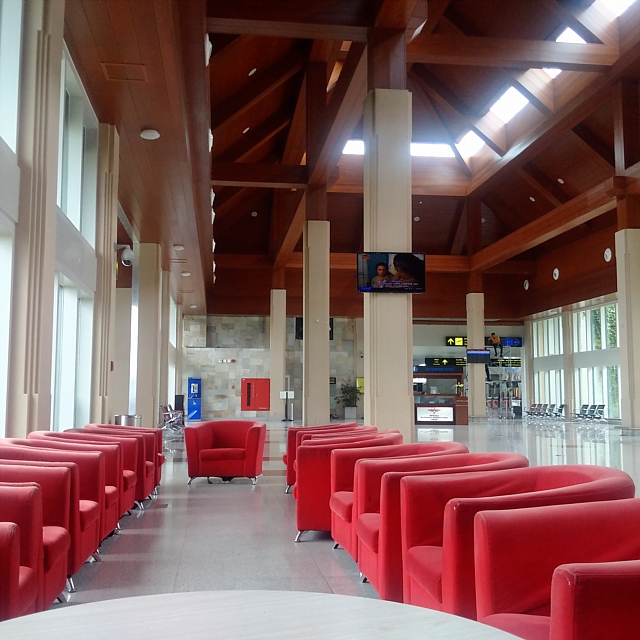 This airport was supposed to complement a new deep sea port in the same area called Magampura Mahinda Rajapaksa Deep Sea Port and a new venue that met the standards for international cricket called the Mahinda Rajapaksa International Cricket Stadium and thus transform the area into a major business and tourist hub.

The clue as to this flurry of activity can be seen in the repeated use of ‘Rajapaksa’ which is the name of the president of Sri Lanka who governed the country for a decade, put his relatives in major positions, and pretty much treated the country as his personal fiefdom. All these massive construction projects were done in his home region and were largely funded by the Chinese government which was willing to indulge his grandiose schemes of self-promotion in return for getting a foothold in a strategic location in the Indian Ocean and access to a port. Sadly, these kinds of vanity projects that use public resources to promote individuals are not uncommon.

Rajapaksa was voted out of office last year by an alliance of the opposition and defectors from his own party. There are unverified rumors that the US and the Indian governments, concerned by China’s increased presence and influence in the country, secretly funded the opposition alliance that defeated him. The new government seeks to have closer relations with the US and distance itself from China and is reluctant to pour more money into the airport, and even canceled its role as a hub for a domestic airline, and so we may well end up with a very expensive white elephant.