There is something vaguely creepy about Ted Cruz.

It is more than the smug expression that is his standard face. He also has the sly expression of someone who thinks he is way smarter than you and can argue better and thus can make you believe what he says. This confidence is shown in the way he flatly distorts things and uses his skills in sophistry to try and make his lies sound truthful.

For example, he denies the reality of climate change by stating that the satellite data show no warming for the last 18 years. This is a popular trope among climate change denialists. But that choice of years should immediately raise warning flags. Why pick 18 years for a subject in which the usual time scale is decades, centuries, and millennia? Why not pick 10, 50, 100 or another round number of years, the usual way we pick time intervals? As Trevor Noah said, the only time 18-year periods come up is when you are talking about child support.

The answer is that 1998 was an unusually warm year and this enables denialists to suggest that the Earth has not warmed since then, though even that argument is now failing because 2014 was a record-breaking year and this year promises to exceed even that. Here is a chart from the World Meteorological Organization. Notice that El Nino years are warmer than usual, while La Nina ones are colder than normal. 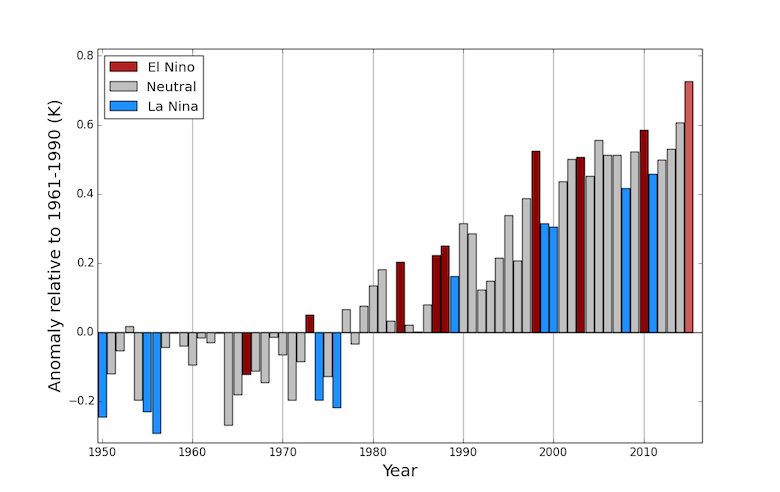 Secondly, Cruz and others like him focus on just satellite data which are less accurate than ground-based thermometer readings.

Watch this interaction between Cruz at last Tuesday’s senate committee hearing that he chaired and retired Rear Admiral David Titley who is now a meteorology professor at Penn State University, where Titley politely but categorically exposes Cruz’s distortions.

Cruz was able to get away with these distortions when talking to NPR’s Steve Inskeep who is not a scientist but Titley is a meteorologist and had clearly prepared for this. Cruz is either ignorant of basic data interpretation or is a blackguard. In his case, I will give him the benefit of the doubt and say he is both.

Larry Wilmore seems to share my sense that Cruz is creepy.

(This clip aired on December 14, 2015. To get suggestions on how to view clips of The Daily Show and The Nightly Show outside the US, please see this earlier post. If the videos autoplay, please see here for a diagnosis and possible solutions.)

The Republican debate sounded like an ISIS recruitment event » « Should a newspaper’s owner be allowed to be anonymous?