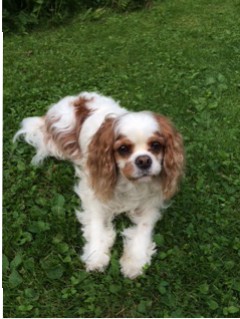 As regular readers know, Baxter the Wonder Dog is a Cavalier King Charles Spaniel. The video below gives some facts about the breed. Although they originated in England in the 1600s, at the end of World War II, there were only six such dogs and all the current dogs are descendants from them.

One problem of having such a narrow population bottleneck is that any genetic problem in one or more of the original group would be propagated to large numbers of dogs. It is known that the breed suffers from a congenital mitral valve heart defect that makes their life spans shorter than for comparable small dogs. Reputable breeders, like the person from whom we got Baxter, are trying to get rid of that trait. We get him checked regularly and so far he does not show any symptoms so we are keeping our fingers crossed.

This video captures perfectly why they are so lovable and Baxter has all those qualities.