It is not only evangelical Christians who oppose same-sex marriage. Orthodox Jews also dislike it and were upset by the Supreme Court verdict. One group of Orthodox Jews decided to protest New York’s Gay Pride parade held over the weekend but an acute observer noticed that there was something not quite right about the man clad in traditional black Orthodox garb and hat and with long hair. 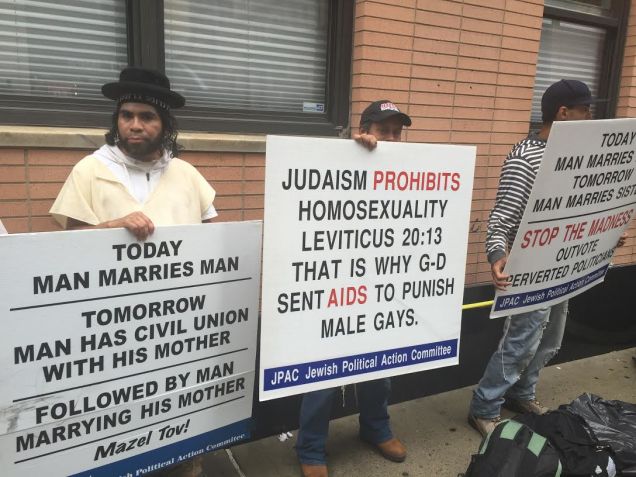 It turns out that a yeshiva hires Latino men to dress up like Orthodox Jews and be surrogate protesters because they fear what their own students might be exposed to by attending such parades.

So lest the impressionable young men of the yeshiva see the odd man in a thong or two, these bigoted men of God decided it best to, instead, find some random laborers, dress them up in their holiest garb, and pay them to attempt to shame the jubilant attendees of New York’s pride parade. In which case, honestly, the kids would be better off just seeing the schmeckle. [Schmeckle is the Yiddish term for penis-MS]

These religious groups just kill me.

Is the Supreme Court liberal or conservative? » « The next stage of the war against same-sex marriage