By the end of June, there will be two rulings by the US Supreme Court that will have wide-ranging consequences. One involves Obamacare and deals with whether the subsidies provided by the exchanges set up by the federal government in those states that chose not to set up their own is constitutional. The other deals with same-sex marriage and involves two issues: whether states can ban same-sex marriages and whether they can refuse to recognize those conducted in other states.

In both cases, the Republican party’s position initially seemed clear and unambiguous. After all, when it comes to Obamacare, they have repeatedly asserted that they wanted nothing less than total repeal and in fact have voted to do so over 50 times in the House of Representatives, though the Senate never went along. The Republicans hoped that they could get through the courts what they could not through Congress. They had mixed results in the previous case where the court ruled that while Obamacare was constitutional, states could choose to not accept the Medicaid expansion portion of it, thus allowing states that were controlled by Republicans to deny health insurance to the poor, an unbelievably mean and despicable act.

In the current case, the opponents want the subsidies provided by the federal exchanges to be ruled unconstitutional. But during the hearings and later, the implications of such a verdict have become clearer and somewhat ominous. There are an estimated 13 million Americans who would lose their health insurance if the Supreme Court invalidates the federal exchanges.

Not only will millions of people be suddenly deprived of health insurance, there are fears that it will also collapse the private health insurance market in those states and result in a great loss of revenue for the health care industry. Jonathan Cohn looks at the states that would be most impacted and says that the Republican party has no plan about what to do to fix the problem. 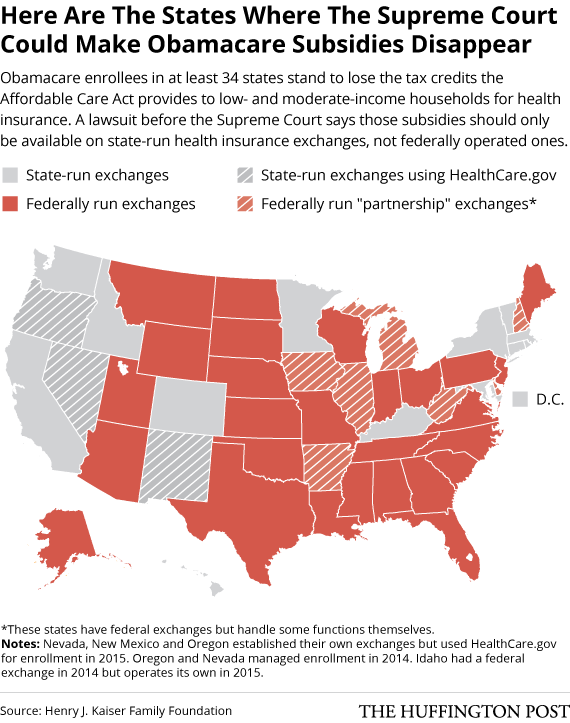 This would cause a furor during the year leading up to the 2016 elections and be a major headache for Republicans to deal with, especially since over 80% of the people who would lose their health coverage are employed and are low-income or middle-income people, mostly white and mostly in the south, the very people that the Republican party considers its base. Analysts have warned that there is nothing that can be done administratively to fix the problem. The only way to fix it would be for the Republican-controlled Congress to pass legislation to explicitly allow federal exchanges but there is no way that they can do that since they are yoked so tightly to repealing Obamacare.

So winning this legal battle in the Supreme Court would result in a major political headache for them. But if they lose the battle, they can blame the court and say that there is nothing they can do about it.

The same dilemma has emerged with same-sex marriage. The Republican party is now closely identified with being opposed to it while the country as a whole is moving in favor and quite rapidly too. This presents a political problem for them. If the Supreme Court upholds both bans, then this issue will continue to boil during the elections and work against them. Their candidates will be constantly asked what their stands on same-sex marriage are and there is no answer that they can give that will not paint them as bigots or anger their supporters.

If the Supreme Court comes down in favor of same-sex marriage though, it will let the Republican party off the hook because the issue will quickly disappear. If asked, they can say that since the courts have allowed it, there is nothing they can do anymore and their opinion does not matter. They could redirect their supporters’ anger towards the Supreme Court and take that losing proposition off the political agenda for them in 2016.

So in both the Obamacare and same-sex marriage cases, the Republicans can win politically by losing legally and vice versa.

Of course, if the Supreme Court says that same-sex couples have the right to marry, then all hell will break loose among the religious crazies in the party and you can expect to hear a level of anger that will rock the rafters. This will be the case even if the court says that states have the right to ban same-sex marriage but must recognize marriages that are carried out by other states, because the religious crazies, though not the sharpest pencils in the box, will quickly figure out that this implies de facto nationwide acceptance.

Some opponent are saying that they are willing to defy the Supreme Court on this issue and resurrecting the old idea of ‘nullification’ whereby states have the right to invalidate federal laws they think are unconstitutional. These ideas were popular in the past with supporters of slavery and segregation, not the kinds of people and issues that sane people nowadays would want to be associated with.

Lawmakers in Texas and elsewhere are already anticipating an adverse verdict and considering legislation to preemptively combat it.

State lawmakers are considering at least five bills designed to block same-sex marriages, which are currently illegal in the state, and some state leaders say they’ll battle to bar the unions regardless of any Supreme Court decision.
…

Texas joins a handful of states, including Alabama, Michigan and Louisiana, that are considering legislation that would throw up roadblocks to gay marriage in apparent anticipation of the Supreme Court ruling.
…

The fact that the Supreme Court is considering cases from Ohio, Tennessee, Michigan and Kentucky but not Texas should preclude state officials here from automatically following any decision from the highest court, said Jonathan Saenz, president of Texas Values, which opposes same-sex marriages.

“If you’re a government actor or official in the state of Texas, you should exercise extreme caution before making a decision based on a U.S. Supreme Court decision,” Saenz said. “States have the right to defend their laws.”
…

“The sovereignty of states is not something to be taken lightly,” [state Rep. Cecil] Bell said. “It’s something intended by the framers of our Constitution.”

I support the right of same-sex couples to marry because I think it is a fundamental question of justice and equality. I hope the Supreme Court agrees with me for just those reasons.

But I have to confess that another reason that I hope the court rules favorably is because it will be absolutely delightful to watch opponents blow a stack, foam at the mouth, and threaten to wage all manner of constitutional confrontations that they will surely lose.