The Boston marathon is being run today. One of the people broadcasting the race is Kathrine Switzer, as she has done for the past 37 years. But her connection to the race is far more groundbreaking.

In 1967, women were not allowed to run in marathons because of then-common beliefs (by the males who dominated sports bodies) about the risks posed to their supposedly fragile bodies. But women felt they were well up to the challenge and incensed by this exclusion, a few had slipped into races by jumping out of the bushes just beyond the starting line and running the distance. But since they were not officially entered and did not have numbers their performances did not count and they were not entered into the record books.

David Davis tells us the fascinating story of Switzer. Under the ambiguous name of K. V. Spitzer, she registered for the race and got the number #261. She was accompanied by her trainer (#490), her boyfriend (#390), and another male friend. Because she was wearing baggy sweatpants and sweatshirts on the cold day, the organizers did not notice that she was a woman until someone alerted one of them (Jock Semple) midway through the race, saying “Hey, Jock, you’ve got a broad on your hands today.” 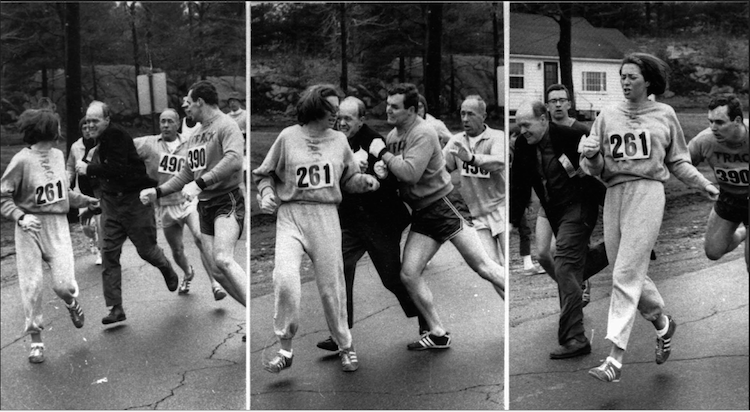 What occurred then was captured in this extraordinary sequence of photographs. The two co-organizers of the race jumped off the journalists’ truck accompanying the runners and tried to grab her. After she evaded the first, the photos show Semple try to grab her and snatch the number bib off her chest in order to disqualify her, except that Switzer’s boyfriend running next to her threw a well-timed body check on the official and bounced him off the course, allowing her to escape from his clutches and finish the course

The photos were splashed all over the media and as a result of the publicity surrounding the whole event, major changes rapidly ensued.

In 1970, the Road Runners Club of America held the first women’s marathon championship (won by Sara Mae Berman). In 1971, the Western Hemisphere Marathon in California allowed women entrants, with Cheryl Bridges recording the landmark victory. The following year, Jock Semple [the official in the photo] opened the Boston Marathon to women, with Nina Kuscsik the winner. Switzer finished third.

On June 23, 1972, President Richard Nixon signed the Education Amendments of 1972 into law. One provision, Title IX, mandated more equitable treatment for female student-athletes, and women’s distance-running programs gradually became the norm. Finally, in 1984, the women’s marathon was added to the Olympic program. American Joan Benoit triumphed in Los Angeles, in 2:24:52, as she defeated Norway’s top-ranked Grete Waitz. Yet another all-male bastion had collapsed completely.

The full story told by Davis is quite fascinating. It is hard to imagine now how determined people were at one time to keep women out of some competitive athletic events.

It’s more fun to eat with a friend » « Oh great, another Bundyesque standoff in the works?