In Cleveland yesterday March as usual came in like a lion with a mixture of snow, rain, and sleet that covered things with an icy mess. While temperatures went above freezing after a long, cold period, later this week will see it plunge again, as winter socks us one last time before going out like a lamb. Dennis Mersereau has been monitoring the weather and he says that we just coming to the end of a weird winter in the US, highlighted by this chart. He says that despite our subjective impressions in the eastern part of the US, for the contiguous US as a whole this winter will be warmer-than-average and drier-than-average. 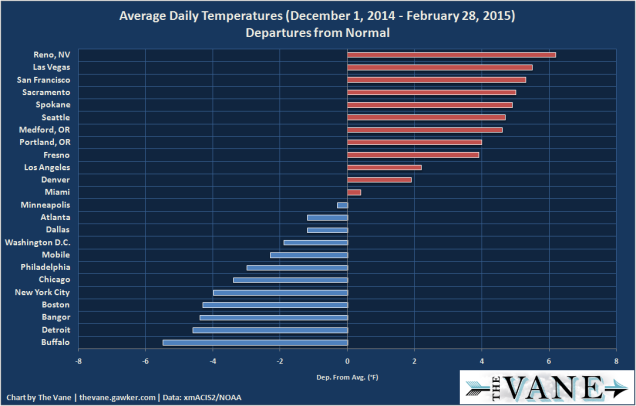 The numbers are striking when you organize them from warm to cold. Every city that was warmer than average lies in the western United States (except for Miami, of course), and every city that was cooler than average lies in the eastern United States. Of course, these aren’t all of the cities in these areas, but they’re spaced far enough apart to show the basic, sharp trend between the warm west and the cold east.
…

Much of the ugly data from winter came in the last couple of weeks of February, when a ridiculously cold shot of air from Canada dipped deep into the eastern half of the country. Temperatures here in central North Carolina (where The Vane is bravely based) dipped to -7°F one morning during the coldest of the cold. It was the second-coldest temperature ever recorded in my town since records began in 1901.
…

For the east, it wasn’t as cold as it could have been and has been in the past. The weather was much colder than many cities have seen in years—and some of us younger folks have ever seen, period—but people often remember things by their worse.
…

Folks in the western United States will remember the winter as the warmest they can remember. Depending on their level of self-awareness, some westerners will declare this winter absolutely gorgeous, while others will acknowledge it for the slow-motion drought and impending fire disaster that it really is. The drought keeps getting worse, and drought breeds drought in the feedback cycle from hell. Warm, dry air sitting over parched ground and dead vegetation will lead to a rough fire season if the pattern doesn’t change in the next month or two.

He points out that the period we call winter is defined differently by different groups and that the meteorological definition makes the most sense.

When it comes to weather data, winter ended and spring began at midnight on March 1. Meteorological seasons are different from astronomical seasons. The latter is what we’re all familiar with—when the sun’s direct rays are over the equator, it’s the autumnal/vernal equinox, when it hits the tropic of cancer…you know the routine. Meteorological seasons make more sense, and they’re broken up into even three-month periods. Using this system, winter lasts from December 1 through February 28 (or 29), spring is from March 1 until May 31, and so on.

So since it is now March and winter has ended meteorologically speaking, here’s the song by George Harrison that always cheers me up at this time as a harbinger of spring’s arrival.

What the Petraeus deal tells us about privilege in the US » « What is ISIS trying to achieve?