In yesterday’s game, West Indies convincingly beat Pakistan, defying my prediction that Pakistan would win. Batting first, WI got off to a lackluster start but solid late order batting, combined with poor Pakistan fielding that saw several dropped catches, enabled them to end up with a good score of 310 for 6.

It looks like in this tournament and on these pitches 300 is becoming the target for the team that bats first, since it seems like a winning score. Only once so far has the team that batted first and scored 300 or more not ended up winning the game and so WI must have felt pretty good, though the one exception to this rule was when they lost to Ireland, who scored 307 runs while batting second.

But Pakistan got off to the worst ever start in one-day international games, losing four wickets for just one run. And when their captain Misbah-ul-Haq got out with the team score just 25, the game was pretty much over. Umar Akmal and Sohaib Maqsood delayed the end long enough to prevent Pakistan taking England’s title for the most humiliating defeat of the tournament but their final score of a mere 160 off 39 overs must be a morale damper for the team.

Like England, Pakistan have lost their two opening games but they too can still qualify for the quarterfinals if they win at least three of their next four games against South Africa, Zimbabwe, Ireland, and the UAE. But this is a tougher challenge than that facing England because only against the UAE are they clearly favored to win.

The other game yesterday between Australia and Bangladesh was abandoned due to heavy rain caused by Cyclone Marcia. Not only did this cyclone cause a shark to wash up on the beach, it also produced a huge foamy mass, something I have never seen before. 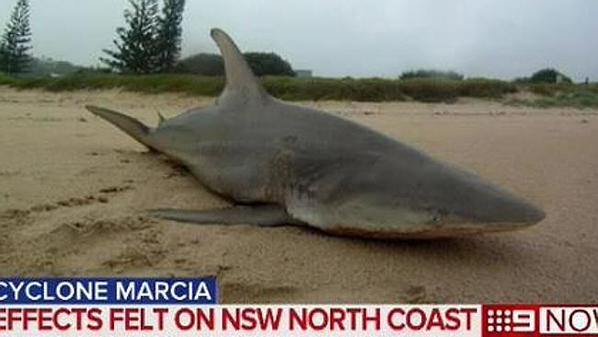 According to the rules of the tournament, when there is a tie, no decision, or the game is abandoned, each team gets one point. So Bangladesh can count itself lucky because few gave it much chance of defeating Australia.

Beware of the blob! » « NSA and GCHQ have accessed your phone’s encryption keys