Some apologists for war try to casually dismiss the unwelcome fact that it results in the deaths of mostly innocent civilians with clichés like ‘war is hell’, acting as if they are themselves veterans of wars who have seen the grimness up close and are thus can be excused for taking a hardened view. In actual reality, I have noticed that many of the people nowadays who say such things are those who have never seen war and death up close and their macho posturing is just that, posturing. This series of stills from the old TV show M*A*S*H better captures the reality of war. 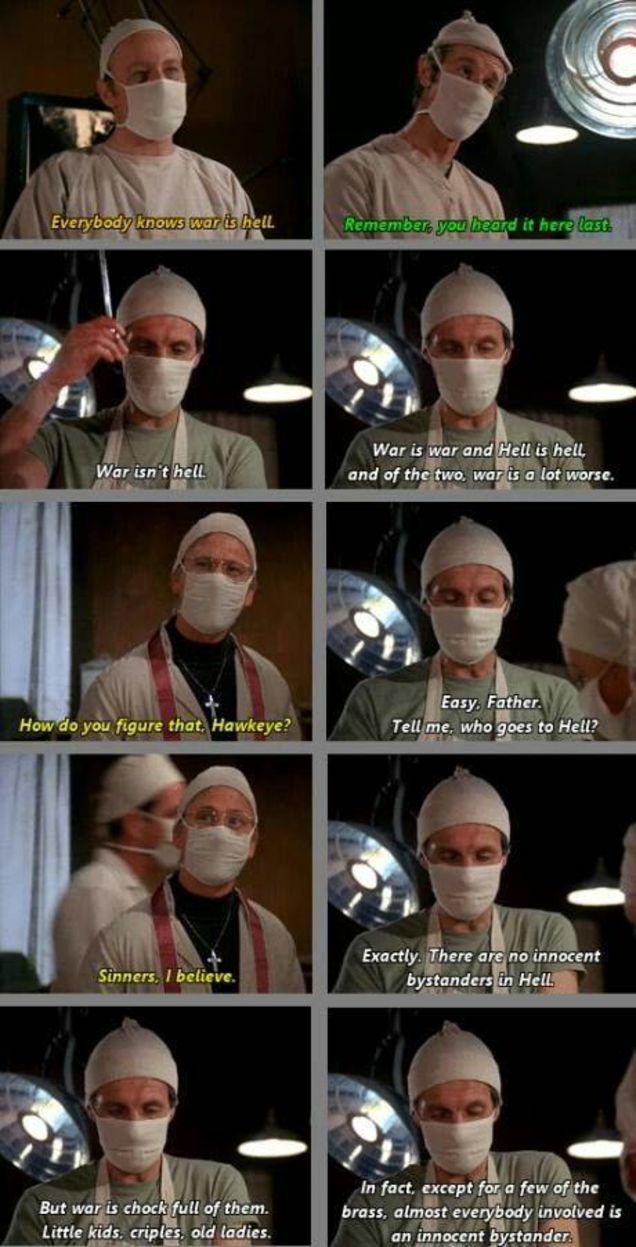 We see the effects of war on civilians played out in the most recent events in Gaza, a conflict in which the death toll has topped 800, mostly civilians. A UN-operated school compound that people had fled to to escape Israeli bombardment was itself hit, resulting in deaths and injuries to many people including, inevitably, children. The link has a disturbing video of the aftermath of the shelling. The UNRWA spokesperson said that they had given the Israeli Defense Forces the coordinates of their school and had asked for safe passage for the people sheltering there but instead of a reply they got missiles.

According to the UN, more than 118,000 people are now sheltering in UN schools and people are running out of food.

It is the fourth time in as many days that a UN facility has been hit.

Correspondents say pools of blood lay on the ground in the courtyard of the school in Beit Hanoun, and there was a large scorch mark where it appeared a shell had hit.
…

The UN’s Office for the Coordination of Humanitarian Affairs (Ocha) says a 3km (1.9 mile) wide strip, encompassing 44% of Gaza, has been designated as a no-go zone by the Israeli military.

Remember that Gaza is essentially a prison camp that has the size and population density of Philadelphia. To declare almost half of it as a no-go zone means that you have effectively declared war on the civilian population since there is no way that so many people in those areas can escape.

The Guardian has more on the bombing of the UN school.

International scrutiny of Israel’s assault on the Gaza Strip intensified on Thursday when more than 15 Palestinians were killed and 200 injured in a strike on a UN school in northern Gaza crowded with hundreds of displaced civilians.

Most of the injured were women and children. Among the dead was a mother and her one-year-old baby. UN staff had been attempting to organise the school’s evacuation when the attack took place.

Ban Ki-moon, secretary general of the UN, condemned the attack, which came hours after the agency had warned that Israel’s actions in the Palestinian enclave could constitute war crimes. “Today’s attack underscores the imperative for the killing to stop and to stop now,” Ban said.

The Israeli military first claimed, in a text sent to journalists, that the school could have been hit by Hamas missiles that fell short. Later, a series of tweets from the Israel Defence Forces appeared to confirm the deaths were the result of an Israeli strike.
…

Hours after the attack, a trail of bloody footprints could be seen crossing a deserted playground littered with abandoned possessions. There were pools of blood both inside and outside the school building; more blood splashed over wooden school desks.
…

Thursday’s assault on the school – one of the grimmest incidents of the war – occurred at about 2.50pm as the playground was crowded with families waiting to be ferried to safety. According to survivors, one shell landed in the schoolyard followed by several more rounds that hit the upper stories of the building.

Most of the wounded were moved initially to a local hospital where terrified women and children clung to each other, waiting for news of relatives. A shell exploded about 50 metres from the hospital building as they waited.

The Guardian also has video of heartbreaking scenes in the hospital in the aftermath of the bombing.

Meanwhile reports are merging through social media of yet another possible massacre in Khuza’a, a town close to the Israeli border, with gruesome eye-witness reports from people on the scene.

The Palestinian Center for Human Rights has been monitoring reports of casualties and destruction and says that as of yesterday, “Since the Beginning of the Israeli Offensive on Gaza: 743 Palestinians Killed, of Whom 605 Are Civilians, Including 176 Children and 96 Women, and 3,946 Others Wounded, Mostly Civilians, Including 1,129 Children and 804 Women; 524 Houses Targeted and Destroyed and Hundreds of Others Extensively Damaged; Thousands of Palestinian Civilians Forcibly Displaced”.

War is not hell. It is a lot worse.