There is an interesting case coming out of southern California that brings to the forefront a few of the constitutional issues involving church and state. The courts have tried to draw distinctions between passive symbols of religion (such as mottoes, crosses and Bibles on seals, and religious sayings on monuments and currencies) and active actions (such as prayer and religious instruction and religion-based actions and policies). It has also tried to distinguish between elimination of long-standing religious practices and those that are introduced as new now, even if the specific act involved is the same.

You may recall chief justice John Roberts making this comment during the oral arguments in the Greece v. Galloway case that showed this distinction.

But wouldn’t we look at it differently if there were –suddenly if there were a proposal today for the first time, to say let’s adopt a motto “In God we trust”? Would we view that the same way simply because it’s –in other words, the history doesn’t make it clear that a particular practice is okay going on in the future. It means, well, this is what they’ve done –they have done, so we’re not going to go back and revisit it. Just like we’re not going to go back and take the cross out of every city seal that’s been there since, you know, 1800. But it doesn’t mean that it would be okay to adopt a seal today that would have a cross in it, does it? (p. 11)

Now the County of Los Angeles has done just what Roberts hypothesized, and voted to insert a cross into its county seal. They are being sued by the ACLU. You can see the current seal on the right that in 2004 replaced the earlier seal on the left. What is being proposed is to add a cross to the one on the right. 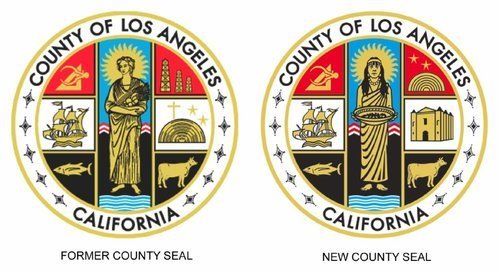 It is the history of the seal that complicates things. The original seal designed in 1887 did not have a cross but in 1957 the seal was redesigned as shown on the left to have a cross that you can see in the middle panel on the right above the semi-circles that represent the Hollywood Bowl. The seal was redesigned in 2004 and under threat of a lawsuit from the ACLU, the current seal as shown on the right was adopted where there is no cross and the middle panel now shows a building that represents the San Gabriel Mission church.

The supervisors have now voted in favor of a new redesign to add a cross to the roof of the image of the church. So is this a case of a new cross being introduced or an old cross being re-instated? This is further complicated because the church used to have a cross prior to 1989 but it was brought down due to earthquake damage and then got stolen so that when the current seal was designed there was no cross on the building. The cross was restored to the church in 2009 and the supervisors argue that they are now inserting it into the seal for the sake of accuracy.

I don’t buy the reason but it could well persuade the court to accept the revision for the following reasons. One of the tests used for determining whether any government action satisfies the Establishment Clause is to see whether it passes the Lemon test which requires the act to (a) have a secular purpose; (b) have the effect of neither advancing or inhibiting religion; and (c) not entangle the government with religion. It is the purpose prong that is likely to be at issue here. If the supervisors can argue that they are purely driven by the desire for accuracy, they might be able to persuade the court that they meet the purpose prong, unless there is a record of the supervisors saying or doing things that suggest they have a covert religious motivation (which is what happened in the 2005 Dover intelligent design case).

There is another doctrinal test (the endorsement test) that asks whether a hypothetical reasonable and informed observer would view the government action as an endorsement of religion. That will be tricky to judge in this case.

The burden of proof will be on the ACLU to prove their case and I think they might lose unless there is a clear trail of evidence showing religious motivation for this action. So why take on the case, since a county seal seems like a fairly trivial thing?

There is one school of thought that says that one should reserve one’s energies for major battles and that things like details of images on county seals are too insignificant to waste time on since hardly anyone pays any attention to them anyway.

Another school of thought says that one must fight encroachments of religion into government actions whenever and wherever they occur, however minor, so that it discourages other government entities from trying to sneak in things, hoping that their actions will be too small to be challenged. If many small incursions are allowed, pretty soon we might be surrounded by religious symbolism. So the LA seal issue should not be looked at in isolation.

So whether one thinks this is a good case to take on or not likely depends on your view of the importance of tactical battles as part of a long-term strategy.