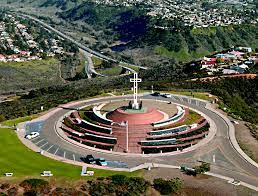 Via Digital Cuttlefish I learned that a US District Court judge ruled last Thursday that the huge cross on Mount Soledad in La Jolla California has to come down.

This decision is long overdue, although the issue is still not quite settled yet. This cross is one of the longest-running church-state cases, dating back to the 1980s, involving an extraordinary level of legal and political maneuvering to the extent of the US Congress passing laws specifically designed to save this religious symbol.

Here’s a brief history of the events, with most of the information coming from the various court rulings that are linked below.

1913: A large redwood cross was placed on the Mount Soledad hilltop dominating the skyline of the La Jolla community of San Diego and visible from miles away for the many travelers cruising along Interstate 5, the major north-south artery.

1916: The city council dedicated the property as a public park

1923: The cross was destroyed by vandals.

1934: Someone placed a wood and stucco cross on the site.

1954: The city granted a private group called the Mount Soledad Memorial Association (MSMA) the right to put up and maintain a new 43-foot high concrete cross, with some public funds as well. This is the current cross and it was dedicated as a memorial to American service members and a tribute to God’s “promise of everlasting life”.

1992: The US District Court resolved that the cross violated the No Preference Clause of the California state constitution and ordered it removed. (I am not sure why a federal court was involved in a suit alleging a violation of the state constitution. Any legal scholars on jurisdiction care to chime in?) The city appealed. While the appeal was pending, the city and the voters voted to authorize the sale of the 22-foot square parcel of land on which the cross stood to the MSMA without any competing bids. The sale was challenged as being a bad faith effort to avoid complying with the court order.

1993: The US Ninth Circuit Court of Appeals affirmed the lower court decision, rejecting the idea that the cross was a purely commemorative object, pointing to the fact that the Latin cross is a Christian symbol and noting that it was “dedicated on Easter morning in a Christian religious ceremony”.

1997: A US District Court ruled that the sale of the land to the MSMA was invalid because its primary purpose was to preserve the cross and as such it represented a preference for the Christian religion.

1998: The city then solicited bids for a second sale, and once again sold to the MSMA the land under the cross that was now expanded to 0.509 acres. The city was sued but the District Court ruled that the method of sale did not prefer the MSMA and so was valid. The association proceeded to surround the cross with more secular symbols honoring veterans.

Although the Cross stood alone for most of its history, it has, since the late 1990s, become the centerpiece of a more extensive war memorial. This Memorial now features six concentric walls around the base of the Cross and approximately 2,100 black stone plaques honoring individual veterans, platoons, and groups of soldiers. Brick paving stones also honor veterans; twenty-three bollards, or posts, honor community and veterans’ organizations; and an American flag flies from a large flagpole.

But the huge cross still dominates the site.

2001: On appeal, a three judge panel of the Ninth Circuit Court of Appeals upheld the verdict allowing the sale.

2002: On appeal of this decision to the full court, the Ninth Circuit reversed 7-4 the verdict of the three-judge panel and voided the sale, saying that “The second sale of the Mt. Soledad land on which the cross stands was structured to provide a direct, immediate, and substantial financial advantage to bidders who had the sectarian purpose of preserving the cross. For that reason, the sale violated article XVI, section 5, of the California Constitution.” However they did not order the immediate removal of the cross saying, “No doubt there are several possible ways to cure this violation. We leave it to the parties and to the district court, in the first instance, to devise a remedy for the constitutional violation.”

2004: A settlement was reached between the parties that the cross would be moved to a nearby church and that seemed the end of it. Except that the federal government suddenly intervened. Two Republican members of Congress introduced a bill that became law that designated the Mount Soledad property as a ‘national veterans’ memorial’ and authorizing the federal government to accept the city’s ‘donation’ of the property. The city declined to make the donation but under pressure from groups who wanted to preserve the cross, put it to a referendum that passed overwhelmingly. But a state trial court stopped the donation from proceeding.

2006: A US District Court ordered the city to remove the cross within 90 days or face a fine of $5,000 per day. The city appealed that decision to the Court of Appeals but was denied.

2006: A bill passed by Congress ordered the government to seize the property using its powers of eminent domain and it took possession in August 2006. Now that it belonged to the federal government, two individuals Steve Struck and Philip Paulson (the latter now deceased) and the group Jewish War Veterans challenged the cross on the grounds that it violated the Establishment Clause of the US constitution.

2008: US District Court judge Larry Burns denied their motion, saying that “Congress had acted with a secular purpose in acquiring the Memorial and that the Memorial did not have the effect of advancing religion.” That decision was appealed to the Ninth Circuit Court of Appeals.

2011: The Ninth Circuit overturned the ruling, finding that while the Latin cross is undoubtedly a Christian symbol, that alone did not constitute an Establishment Clause violation. When it comes to the presence of ‘passive’ symbols like crosses and the Ten Commandments, the court said that it needed to undertake detailed historical analyses, using both the ‘Lemon test’ from Lemon v. Kurtzman and the guidelines given in the 2005 case Van Orden v. Perry (citations omitted).

The Supreme Court has articulated two related constructs that guide our analysis: the test set forth in Lemon, which-through various twists and turns-has long governed Establishment Clause claims, and the analysis for monuments and religious displays more recently articulated in Van Orden. The Lemon test asks whether the action or policy at issue (1) has a secular purpose, (2) has the principal effect of advancing religion, or (3) causes excessive entanglement with religion. In recent years, the Supreme Court essentially has collapsed these last two prongs to ask “whether the challenged governmental practice has the effect of endorsing religion.” Although Lemon has been strongly criticized, the Supreme Court has never overruled it, and in fact applied the Lemon test to a Ten Commandments display in an opinion issued the same day as Van Orden.

In Van Orden, the Court declined to apply Lemon to a Ten Commandments monument on the grounds of the Texas State Capitol. Addressing whether that monument violated the Establishment Clause, the plurality struggled with reconciling “the strong role played by religion and religious traditions throughout our Nation’s history” with the constitutional separation of church and state. The plurality concluded that the Lemon test was “not useful in dealing with the sort of passive monument that Texas ha[d] erected on its Capitol grounds.”. Instead, its analysis focused on “the nature of the monument and ․ our Nation’s history.” Taking into consideration the role of God and the Ten Commandments in the nation’s founding and history, the monument’s passive use, and its “undeniable historical meaning,” the plurality concluded that the display passed constitutional muster.

The court ruled that Congress’s action in acquiring the property had a predominantly secular purpose and was thus acceptable. But after an exhaustive analysis of the history of the case it arrived at the conclusion that the cross was unconstitutional.

Accordingly, after examining the entirety of the Mount Soledad Memorial in context-having considered its history, its religious and non-religious uses, its sectarian and secular features, the history of war memorials and the dominance of the Cross-we conclude that the Memorial, presently configured and as a whole, primarily conveys a message of government endorsement of religion that violates the Establishment Clause. This result does not mean that the Memorial could not be modified to pass constitutional muster nor does it mean that no cross can be part of this veterans’ memorial. We take no position on those issues.

2012: This ruling was appealed to the US Supreme Court but it declined to hear the case. Hence the case went back to US District judge Larry Burns to fashion a remedy consistent with the Appeals Court opinion.

2013: Although he still felt that the cross was constitutional, last Thursday judge Burns reluctantly ruled that there was no solution that he could see to the problem other than the removal of the cross. The judge stayed his order pending the end of any appeals. Supporters of the cross have 90 days to file an appeal, which they have promised to do.

Supporters of the cross think that the Supreme Court’s reluctance in 2012 to hear their appeal may have been due to the fact that at that stage there had not been a definitive decision that the cross must be removed, as indicated by Justice Alito explaining his reasons for the refusal to grant certiorari, although he said that “the constitutionality of the Mount Soledad Veterans Memorial is a question of substantial importance”. Now that an order for its removal has been given, plus the fact that this is now an Establishment Clause case under the US constitution, gives them hope that it may spur the US Supreme Court to accept their new appeal. What may work against them is that having accepted an Establishment Clause case this year (the Greece v. Galloway prayer case), the court may not want to take up another one next year.

But who knows. The fat lady hasn’t quite sung yet on the Mount Soledad cross but she is warming up in the wings.