One of the great fantasies inspired by Ayn Rand’s book Atlas Shrugged is that the real producers in society can bring society to a grinding halt by simply withdrawing their services. In the book they are so tired of the fruits of their labor being taken by the moochers and looters that they carry out their threat and retreat to a remote place called Galt’s Gulch.

One can see the appeal of that idea to a certain type of adolescent mind. If one feels that one’s worth is unappreciated by those around you, the idea that if one were to disappear then people would realize what a treasure they had lost and would mourn your absence and wish they had treated you better can be quite comforting. This fantasy can, unfortunately, lead young people to do reckless things. But as one grows older, this is seen as the childish illusion it is and is abandoned. At least, that is the case for most people.

But there are some for whom that fantasy remains real and we now have the spectacle of people seemingly willing to live it out by creating remote supposedly self-sufficient enclaves where those who are dissatisfied with the way they feel that the US is taking away their liberties can go and be free, leaving the jackbooted hellhole to the rest of us.

One such project is called The Citadel and is located in Idaho. The promoters have plans and everything, as can be seen from this map of the proposed community. 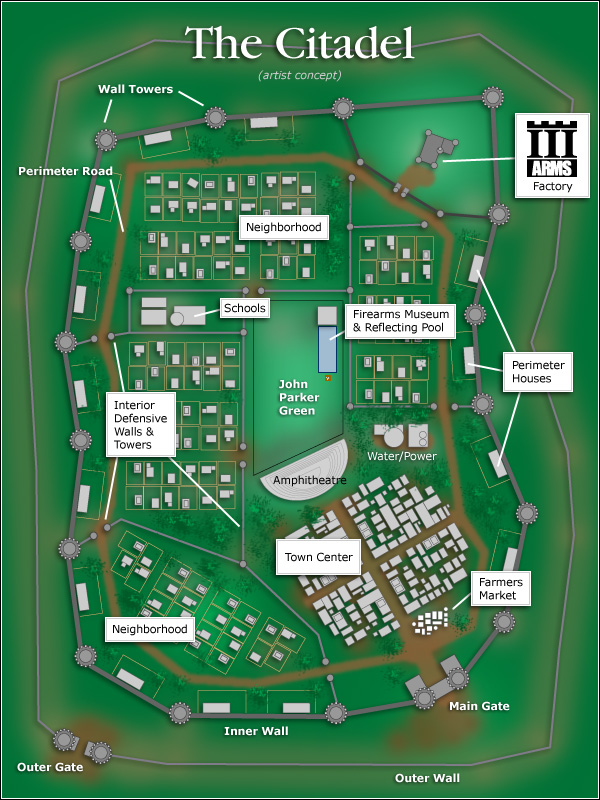 Note the two levels of fortified walls and the arms factory to defend themselves, presumably against our future United Nations overlords. The enclave will allow somewhere around 5,000 families to live in it. The application fee is $208 but before you send in your deposit be aware that not everyone is welcome. According to the project’s website, “Marxists, Socialists, Liberals and Establishment Republicans will likely find that life in our community is incompatible with their existing ideology and preferred lifestyles.” You can read more about the place and the hopes of the people who will live there here.

Of course, hucksters like Glenn Beck see this as yet another way of separating the rubes from their money and he is talking about starting a similar project, this time in Texas, maybe because that state has a lot of people with more money than sense, proven by the fact that they have repeatedly elected Rick Perry as their governor.

Needless to say, comedians have been having a field day with reports that the rugged individualists in the US are threatening to Galt. Here is Stephen Colbert’s take on the Citadel.

(This clip was aired on January 9, 2013. To get suggestions on how to view clips of The Daily Show and The Colbert Report outside the US, please see this earlier post.)

One thing that amuses me is that all these people who are seeking to escape from the tyranny of government in order to live fully free lives don’t seem to realize that for a small closed community to survive within a walled fortress, it must have strict rules about what everyone can and cannot do. They will end up having to live with far more rules than the most restrictive condominium association in a big city, with one major difference in that everyone will be armed to the teeth and feel justified in settling disputes with force. I don’t see this ending well for the libertarians.

Unfortunately these people are unlikely to carry out their threat. It is one thing for rich people to believe intellectually that everyone depends on them. In reality, it is they who are the moochers and looters, who depend on an entire system of low-wage workers for their luxurious lifestyles.

But having said that, I am totally in favor of these projects. I have written before (see my post titled In the name of Galt, go!) that we would all actually be better off if those who are currently threatening to ‘go Galt’ and throw society into chaos would actually carry out their threat. We would be rid of these pests for good, and the people who remain would be those who see that contributing to the public good makes life better for everyone. The problem is that these Galtians never seem to carry out their threat.

But what about the basic idea that if these very wealthy people abandon a society, that society will suffer? Is there any way to test that idea since these pests don’t seem likely to leave? It turns out that there may be a natural experiment that may shed some light on this. The French government has proposed taxing incomes over one million euros at a rate of 75%. This prompted some rich French to say they were going to leave the country. I was hopeful that this would provide a natural experiment to see if France actually did better after these rich parasites left. Unfortunately after an adverse court ruling, the government said that businesses could pay the tax on behalf of their highly paid employees so the experiment may not be definitive, since the rich will not be paying that tax themselves, and so they may stay.

Good news, but there is still some way to go » « Alert guide dog saves couple