I didn’t watch the Oscars. I never watch these awards shows as they seem to me to be incredibly boring. But I did read about the fact that the company Rhythm & Hues that won the Academy Award for special effects for their work on the film Life of Pi had filed for bankruptcy, making the occasion bittersweet for them. 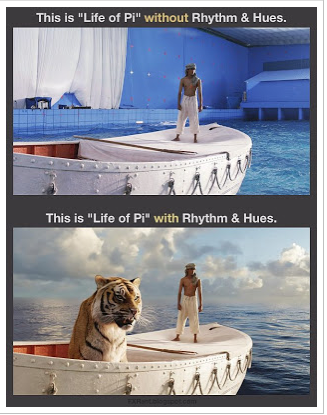 Rhythm & Hues was also behind films like Babe, The Golden Compass and Snow White and the Huntsman. Another visual special effects (or VFX) outfit Digital Domain Media Group had also filed for bankruptcy before being bought by another company.

Over 400 animators demonstrated against this state of affairs at the Oscars ceremony.

The reason I was alert to that piece of news was that reader Gordon had sent me a link earlier telling me that although special effects are playing such a large role in films these days, the companies that make them are struggling to stay in business. I don’t understand at all the economics of the film industry but Gordon, who works in visual special effects, gives some insight into what is causing this state of affairs, and it is the usual story of putting the squeeze on the people who do the actual work, while the companies make huge profits.

Basically, the visual effects studio responsible for Life of Pi is filing for bankruptcy today and it’s another in a long list of studios that have been shutting down lately due to international subsidies and market pressures from movie studios to produce work as cheaply as possible with no regard for quality.

Most of the visual effects work is being outsourced to Canada these days, since British Columbia offers the studios a major tax incentive without any requirement that the movie be filmed there – it’s all being done by the same people, they’re just being forced to move to Vancouver to do the same jobs – all of the major visual effects houses are being forced to cut costs so they’re all chasing subsidies and forcing their employees to follow them.

It also seems that the movie productions are also very poorly run these days – it’s not uncommon for movies to go on hiatus for 4-6 months while they get their shit together and the vfx houses that have staffed up to handle it just have to eat the cost or risk losing artists to other studios. Then there’s the usual problem of a client failing to hand over plates to the fx house on time (again, 4-6 month delays aren’t uncommon) but the movie’s release date remains fixed, so everything has to get done in half the time – then people complain about how crappy the cg looks and we get the blame again.

A friend made the analogy that it’s like forcing a contractor to rebuild a wall 5 times and expecting them not to charge you for it.

It’s a pretty sad state of affairs that while the movies are so heavily reliant on visual effects and make hundreds of millions of dollars for the movie studios, the companies that supply those effects are basically getting the shaft.

It’s also a pretty sad state of affairs when you can win every visual effects award the industry has to offer … and go out of business two months later – that has to be a sign that the industry is completely messed up.

It is true that these kinds of effects that make the films look so unbelievably realistic are extremely difficult to create and thus expensive. Life of Pi required 600 animators to do the tiger. But studios presumably make a lot of money on these films so why should not those subsidiaries that play such a large role in their success also benefit from it?

The war on Purim » « What the Hagel confirmation may signify