The Executive Board of the Boy Scouts of America today decided to defer until its national meeting in May a decision on allowing local troops to decide whether they could admit gay members.

I am disappointed but not surprised at the deferral. The possibility of a change in BSA policy emerged just recently and as I wrote before, large religiously-oriented organizations tend not to move quickly on policy matters but slowly edge towards doing the right thing if it goes against their traditional ways of operating. You are going to see a determined effort by the Mormons, Catholics, and the evangelicals to lobby the 1400 voting members of the national meeting to vote against any change. They may well succeed this year but will surely lose in the near future.

Meanwhile, on a more positive note, the British parliament voted yesterday by a large margin of 400 to 175 to allow same-sex marriage.

Prime Minister David Cameron had pushed for the change in law to allow same-sex marriage but all parties had waived party discipline and given their party members freedom to vote as they wished. As a result, he could not get a majority within his own Conservative party and needed votes from his coalition ally the Liberal party and the opposition Labor party to pass it. 136 Conservatives voted against him, 127 with him, and 35 abstained.

I believe the bill now has to go to the House of Lords and be passed there before it becomes law. I have no idea how that body will vote, though I believe that even it votes no, the House of Commons can override it with another vote.

Jesus and Mo are worried by what did not happen after the vote. 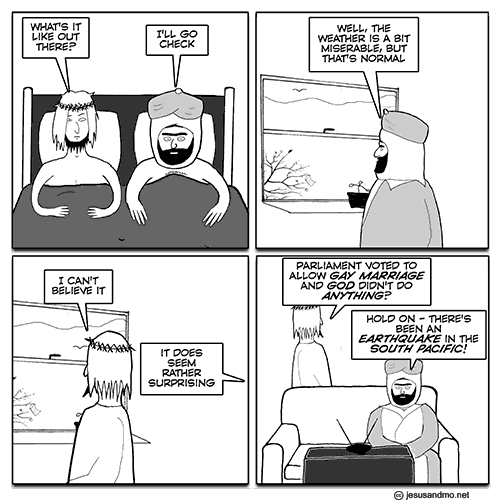 This man is a threat to the world order » « Funny quote