Glenn Greenwald uses the recent murder of an Iranian scientist to meticulously document how the word terrorism has been drained of any objective meaning and has become a propaganda term to be used only to describe acts that are taken against the interests of the US and Israel. If the US and Israel commit such acts, or are even suspected of doing so, then the loaded word is scrupulously avoided and euphemisms substituted, such as the more clinical ‘targeted assassination’.

Does anyone have any doubt whatsoever that if Iran were sending hit squads to kill Israeli scientists in Tel Aviv, or was murdering a series of American scientists at Los Alamos (while wounding several of their wives, including, in one instance, shooting them in front of their child’s kindergarten), that those acts would be universally denounced as Terrorism, and the only debate would be whether the retaliation should be nuclear, carpet-bombing, or invasion? As always, Terrorism is the most meaningless — and thus most manipulated — term of propaganda; it’s always what They do and never what We do.
…
Regarding the question of who is responsible for the spate of scientist murders and explosions in Iran, it is true that there is no dispositive evidence on that question; that’s one of the benefits of conducting most consequential governmental action behind a wall of secrecy: no public accountability. But as the links above demonstrate, there is strong circumstantial and even direct evidence that (a) Israel is involved and (b) the U.S. has engaged in substantial covert acts of war aimed not only at the Iranian nuclear program generally but at Iran’s nuclear scientists specifically.

That all of this is done with total secrecy and no oversight by design enables deniability, if one is eager to embrace that. Newsweek’s neocon national security reporter, Eli Lake, even went so far yesterday as to suggest the “possibility” that Iran is behind these acts of violence: because, as is well known, countries love to murder their own nuclear scientists and blow up their own nuclear facilities (Lake, of course, is right that it’s a “possibility” that Iran is behind this; as I replied: “Another possibility: maybe Senegal, or Singapore, is killing Iran’s scientists – or maybe Martians don’t like their nuclear program”). But by far the most likely explanation is that Israel is responsible, and one would have to be deliberately gullible — to the point of extreme self-delusion — to believe that the U.S. not only has no knowledge of or complicity in a spate of assassinations by its closest client state in a nation in which it has exhibited an intense interest, but also has no ability to stop it if it chose to (at the very least, the U.S. frequently sanctions state sponsors of Terrorism; if it objected to Israel’s acts, wouldn’t it do that here?).

Whatever else might be true, Israel and the U.S. are certainly the leading suspects behind these killings. And that is what explains the vehement resistance against calling this Terrorism. 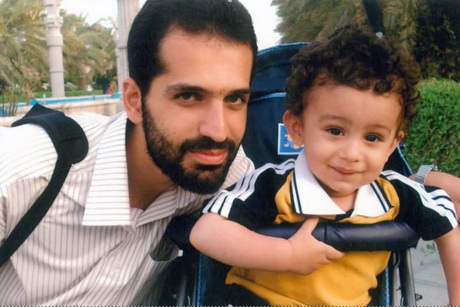 Greenwald’s article is accompanied by a photo of the dead 32-year old scientist with his infant son, looking like any proud father. But this photo was provided by the Iranian Fars News Agency and so is probably fake because we know that these dastardly Iranians will stoop to anything to try and evoke our sympathy. In a subsequent post, Greenwald points out how the Associated Press wrote a caption to the photo that treated it with skepticism, in complete contrast to the way they presumptively assume that anything told to them by American government officials is true.