Have I done anything wrong here? No, at least technically. You said you were fine with any soft drink, and I gave you a soft drink. At the same time, though, you expressed a preference for Mountain Dew over the other choices. I could be forgiven for ignoring your preference if I wasn’t able to fulfill it, or doing so would have been inconvenient for me, but in this fictional scenario both of those were off the table. My choice to hand you a Pepsi instead of a Mountain Dew reveals something about me, most likely that I think other people should prefer Pepsi over other soft drinks. You could point to the ordering of my list as further evidence: I’d be more likely to list my preferred option first, as it would be more prominent in my mind than the other choices, and then rattle off others as they came to me. This isn’t strong evidence, but you’d be justified in suspecting my motives as you enjoyed your Pepsi.

robbe de Boer: Hey EOT, I had a question not related to this video, what pronouns do you prefer? I couldn’t find anything real quick.
EssenceOfThought: They. But I’m fine with both she and he as well. It’s all on the channel description/Facebook page ‘About’ section. 😛

By merely existing, EssenceOfThought has set up a very similar situation. They have a pronoun preference, and when listing their pronoun choices put “he” last, but also say they aren’t offended if you pick another reasonable one. The difficulty in typing two extra letters is practically zero, and “they” as a singular pronoun has been in the English language for six centuries, so there isn’t any obstacle to its use beyond your hang-ups. Hell, even the guy who became famous for refusing to use transgender people’s pronouns is perfectly capable of using singular “they.”

Jordan Peterson: I don’t recognize another person’s right to decide what words I’m going to use, especially when the words they want me to use, first of all, are non-standard elements of the English language and they are constructs of a small coterie of ideologically motivated people. They might have a point but I’m not going to say their words for them.

So if we encounter someone calling EssenceOfThought “he,” we’re justified in raising an eyebrow. While they’re not technically in the wrong, the use of “he” is suggestive that they’d overrule someone’s pronoun preference if they thought they could get away with it.

Steve McRae: Essence of thought bullies Rachel Oates and demonstrates himself to probably one of the worse humans ever to be on Twitter or YouTube.

[12:00] Noel Plum: The truth of the matter is, is that effectively in saying what he’s saying, Essence of Thought has said, to the majority of people who have sided with him, you are transphobes. Your position is, transphobic unless you adopt this position that anyone who identifies as a woman gets to compete in this category, then you are holding a transphobic position. And his masterstroke is that it seems to have done the trick, and nobody’s arguing – none of his supporters are arguing with him.

Rachel Oates: In regards to Essence of Thought calling the police and claiming to be the ‘only one’ actually helping me. It didn’t. He called the police. Who apparently turned up at my old flat, broke the door down and then they wasted hours and many resources trying to find me. Meanwhile, I was at home with my friends around me, having all my Youtube friends send me love and support and check in on me. My family phoned me. People were there for me, helping.

The analogy isn’t a perfect fit. In there, I asked for your choice and received it. EssenceOfThought will mention their preferred pronoun if asked, but does not put it on blast nor do they bother to correct people who don’t pick their preference. Ignorance is more of an option than the analogy presents.

Provided, of course, these people were ignorant. Some of them claim to care about transgender people, though. They should know not to screw up someone’s pronouns, and thus be willing to do a little extra legwork to get things right. Even if they only use “he” because their friends and peers do so, that means their social circle is overwhelmingly dominated by transphobic people or people with a high tolerance to transphobia.

Rachel Oates: Also, I’m really sorry if I got EoT’s pronouns wrong in this thread – I’ve heard different things about which pronouns they prefer & may have slipped up here.

A good way to rule out ignorance is to correct them on EoT’s preferred pronouns. If that person responds with something like this…

Noel Plum: If he drops the “he” then I will drop it too. As it stands he accepts he, she or they. I couldn’t give a toss which he “prefers” as i don’t like him. 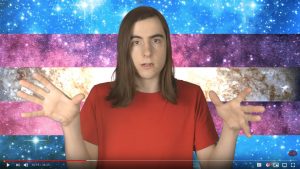 … then you’re pretty justified in believing the “cloaked transphobia” hypothesis.

“He” is also a strange choice given how EssenceOfThought presents. You see someone with no facial hair and long flowing locks in front of a transgender flag, and you immediately jump to “he?” C’mon, even Rationality Rules splits the baby and uses “she.” These people didn’t settle on “he” by accident, their choice reveals something about their internal opinion of transgender people, their peer group, or their ignorance.

And it isn’t very refreshing.

How Was Your Boycott? » « Timeline: Rachel Oates and EssenceOfThought