Whelp, less than thirty-eight hours after my blog post Sam Harris finally deleted that old video. However, spotting that made me realise I’d missed his explanation for why he edited the episode. That was probably by design, the description to the podcast episode drops no hint that it’s there.

As before, I’ve done some light editing, but also included time-stamps so you can check my work.

[3:17] Just a little housekeeping for today’s episode. A few episodes back, I presented audio from an event I did with Christian Picciolini in Dallas, and that was a fun event, I enjoyed speaking with Christian a lot […]

[3:51] But unfortunately, in that podcast, Christian said a few things that don’t seem to have been strictly true, and as the weeks have passed and that podcast has continued streaming I’ve heard from two people who consider his remarks to have been unfairly damaging to their reputations. This is a problem that I am quite sensitive to, given what gets done to me, by my critics. Somewhat ironically, Christian seems to rely on the Southern Poverty Law Center for much of his information, but this is an organization, as many of you know, which is undergoing a full moral and intellectual self-immolation. In fact, Christian is confused enough about the stature of that organization that he retweeted an article from the SPLC website wherein I am described as a racist recruiter for the alt-right. […]

We’re barely a minute in, and Harris has badly distorted the record. One of Picciolini’s tweets references the Southern Poverty Law Center, true, but he also cites tweets by David Duke, The Daily Stormer, Wikipedia (and before you start, I checked the citations and it’s legit), Joe Rogan, YouTube recordings of Molyneux, and his experiences talking to families with Molyneux-obsessed members. Yet that one reference to the SPLC somehow translates into “much of his information?”

Harris also misrepresents that SPLC article. They didn’t declare him to be a recruiter, self-declared members of the alt-Right said that Sam Harris helped lead them to the alt-Right. 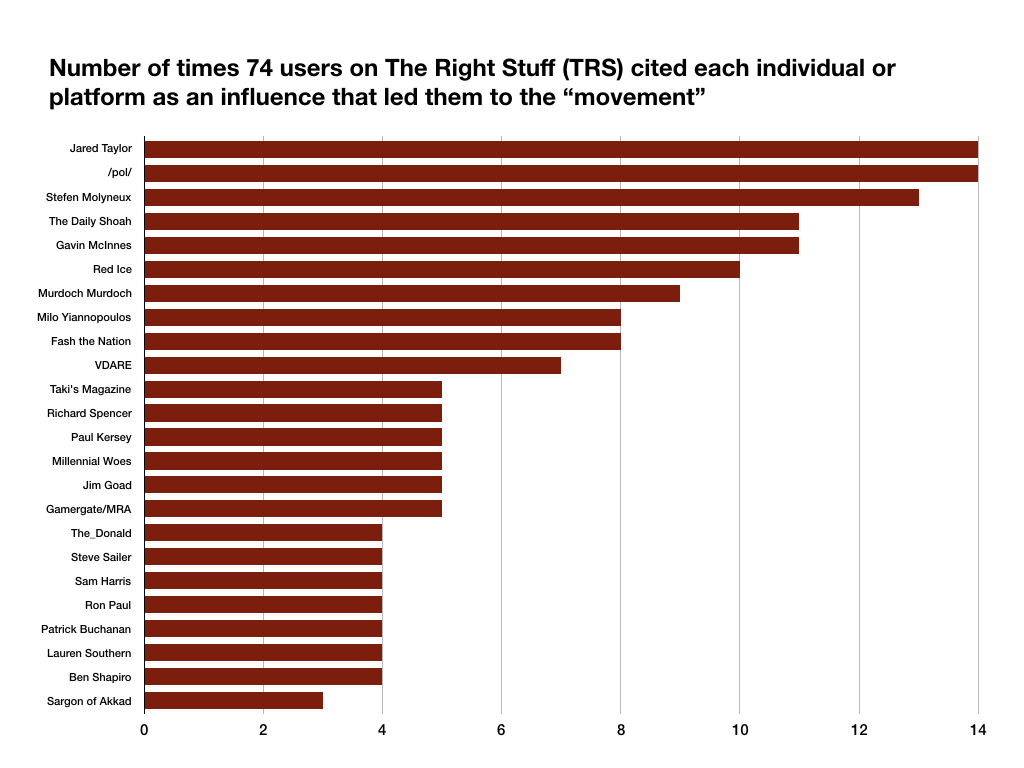 Harris may not be on the most popular route into the alt-Right, but if this sample’s to be believed he’s as much a recruiter as /r/The_Donald, Steve Sailer, and Lauren Southern. If Harris really is as opposed to the alt-Right as he claims, he should do something about that.

[6:27] … Anyway, the two people who contacted me in the wake of my podcast with Christian were James Damore, author of the infamous Google memo, and Stefan Molyneux, a Canadian YouTuber with a very large following. At our event, Christian described Damore as a member of the alt-Right, to the surprise and consternation of many people in the audience [6:49] …

Here’s what Picciolini actually said about Damore (timestamps are from the original audio):

[57:10] I also want to know- why he was doing exclusively all-Right and white nationalist podcasts, for months after that incident?

[2:26:10] And I think that’s what I meant by “knowing more,” because I’ve watched these alt-Right podcasts that he’s been on, and the things that he’s said, have gone outside of the scope of this letter that he wrote. So, you know, you can make your own decision. I mean, I’ve never met the guy, and I’m not gonna call him a Nazi, but he’s sympathetic-

[2:26:40] I’ve heard him say things in podcasts that were very aligned with their ideologies, from a racial perspective. I’m not talking about, you know, women and the workplace, and things like that. I don’t recall exactly what those things were, it was- it happened a while ago.

Harris is flatly wrong here, if anything Picciolini is careful to avoid saying Damore’s a member of the alt-Right! Back to Harris’ “correction,” though:

As far as I can tell, that last one is legal. To quote myself:

Holocaust deniers like James Keegstra have been convicted of hate speech in Canada, true. But Picciolini is wrong; read the relevant sections of Canada’s Criminal Code, and you’ll see it covers “promoting genocide,” inciting “hatred against any identifiable group where such incitement is likely to lead to a breach of the peace,” and “communicating statements” publicly that “wilfully promotes hatred against any identifiable group.” The Holocaust is never explicitly mentioned, and I can’t find it in any other Canadian law. … I can’t find a single Canadian case involving Holocaust denial alone, and it’s an awkward fit under those two sections of the Criminal Code.

As for the claim that Molyneux is “very, very close to” Holocaust denial, Picciolini is on firm ground. So there’s no slander there, as far as I can tell.

[7:00] He also said that Molyneux had been in conversation with David Duke, the white supremacist nutcase and former Grand Wizard of the KKK. […]

This is the closest thing I can find to a false statement, however I’m not a former white supremacist. Picciolini in contrast was leading a white supremacist group back in ’89, so when he says (for instance) that Molyneux endorsed Duke’s 1992 political program he might have insider information that I lack. He may also be may confused or making that claim up, but unless I have knowledge that calls his claim into question the proper stance is agnosticism, not asserting it was false.

[7:26] However, I’ve since come to believe that all of these specific charges are false. And given how concerned I am to represent the views of other people fairly, even the views of people with whom I may disagree – in fact especially people with whom I may disagree – I’ve decided that we should re-edit those podcasts to remove the misleading statements.

Note too that Harris makes a lie of omission here, implying he only removed Picciolini’s misleading statements. He doesn’t mention he removed everything related to Damore, as well as some of his own statements about Molyneux. Here’s a few examples:

HARRIS: [56:34] It’s the fact that James Damore wrote what was an utterly innocuous and almost entirely defensible scientific document, right, which was just bemoaning the fact that you couldn’t talk about these things at Google.

AUDIENCE MEMBER: [1:03:27] So when I read James Damore’s, uh, kinda [pieced?] memo – a lot of alarms went off in my head, but I kind of feel the same way I think you two feel. What’s bad about this, what’s actually wrong?

HARRIS: [1:52:34] … and at some point in the conversation, Stefan says something that suggests his… rather…

HARRIS: …  suspicious fascination with racial difference, like he says something about the – average IQ in African countries or – so, something which Douglas clearly never heard before and just didn’t know what to do with, and he just kind of dodged and moved on, right? So that was the first time I was watching Stefan, and – again, I don’t watch Stefan’s podcast, but I’ve seen many episodes and I’ve seen him on Rogen, and I’ve heard the rumors about his cultic behavior, and all that – but, then I saw his- Stefan’s conversation with Jared Taylor, right? And that was just a glad-handing gab fest, I mean there was no daylight between these guys, they each loved the other more, it was just a bro fest. [1:53:26]

[1:16:05] So Stefan Molyneux is a name that I know very well, because a significant number of parents that reach out to me have lost their children to his ideology. […]

[1:17:25] But Molyneux, now- I mean, he’s a dangerous person. He is somebody that is effectively destroying families around the world, because he is latching on and giving his, his views to these really impressionable young people, who now are convinced that every problem in their life is because of their parents, or their family, and now they need to you know divorce them and never, ever talk to them again.

Picciolini was kind enough to post a bit of an email chain suggesting Molyneux threatened Harris with a lawsuit, so it’s more likely the latter panicked and scrubbed anything mentioned in the threat. It would explain why the removals were so targeted. Even that, though, doesn’t explain why Harris would make such a big show of claiming Picciolini made false statements, when (based on what I’ve researched) he didn’t or can’t know that.

[8:10] I spoke with Molyneux on the phone last week, and it was clear from our conversation that these two specific charges were false. He claims to accept mainstream historical accounts of the Holocaust, and making that claim is tantamount to proving that you’re not a Holocaust denier. It’s very easy to prove you’re not a Holocaust denier, you just have to accept the mainstream account of the Holocaust. He also assures me that he’s never spoken to or otherwise communicated with David Duke – it seems that Duke just retweeted Molyneux once – and Christian took this to mean that the two were in league with one another. […]

Now we also know Harris’ evidence that Molyneux wasn’t a Holocaust denier, or hung out with David Duke: Molyneux told Harris he wasn’t, and didn’t. By that logic, Bill Cosby never sexually assaulted women and there were no connections between the Trump campaign and the Kremlin; when some action might get you tossed in jail, denial is your first line of defense and so a denial proves nothing by itself. That Harris buys into Molyneux’s assurances so completely is telling: we lower our standards of evidence for people we agree with and trust. Despite his obvious unease over Molyneux’s beliefs, it’s clear Harris has a lot more sympathy for Molyneux than for Picciolini, a credible expert on white supremacists.

[9:01] So, given what I have since learned, I wanted to correct the record and apologize, both to James Damore and Stefan Molineux, for whatever hassle that episode of the podcast created for them. Needless to say, this shouldn’t be taken as an endorsement of anything these men have said or done in the past, or will say or do in the future. In fact, I don’t know much more about Damore and Molyneux than I did when I was sitting on stage with Christian in Dallas, several months ago, but it’s important not to spread misinformation about people, and to apologize when one has. So I wanted to do what I could to correct what has been said about them on this podcast. [9:40]

Again, Harris never mentions that Molyneux was threatening him with a lawsuit; given only this “correction,” you’d assume the two merely had a friendly chat. Harris is making a lie of omission to defend a white supremacist, and even apologising for an alleged falsehood someone else made! And what about the complete scrubbing of Damore? If his “contact” was like Molyneux’s “contact,” then he too threatened a lawsuit.

[9:40] And the audio from my event with Christian, that’s under my control – I can’t control what people have done with it by sampling it on their own, but – the YouTube and podcast versions that I own have been corrected.

That sounds an awful lot like “don’t sue me bro, Picciolini’s words are now in places I don’t control!” Fortunately, as Harris implies the unedited version of that podcast and some clips of what’s removed are floating around YouTube. I’m not even the first to blog about what’s missing, though I do seem to have written the first comprehensive discussion.

I may be biased there, I’ll admit, but at least I’m not as biased as Harris. “Corrected,” ha!