Shoot, are you Canadian or not? For those not, I’ll give a one-paragraph primer on Canadian politics.

There are two main parties on the federal level: the Liberals (centre-Left) and the Conservatives (centre-Right), who swap power every five to ten years. There are also a constellation of lesser parties, of which the New Democratics (Left) have enjoyed the most success in recent years. Each province has localised versions of the federal parties, though their ideological relations can vary widely from place to place; for instance, Alberta’s New Democratic Party is currently fighting with their British Columbia counterparts over an oil pipeline, British Columbia’s right-wing party are the Liberals, and Quebec…. they’re off doing their own thing.

Ontario, our largest province, tends to follow the federal system quite closely. The Ontario Liberal party has been in power for nearly fifteen years, and as you’d expect that’s led to corruption scandals. Given that centrists hold an electoral edge, and the two Left-ish parties split the progressive vote, the most likely outcome would be a switch from the centre-Left Liberals to the centre-Right Progressive Conservatives during this year’s election.

Except, mere months before the election, the PC leader stepped down over sexual assault allegations. This triggered a scramble for a new leader, which turned ugly when the disgraced leader tried to regain power, only to bow out again as the negative press mounted. Nonetheless, that wasn’t enough to tank the PC’s poll numbers and their success at the polls seemed much more likely than not.

So you can imagine most people’s disgust when a Trump clone by the name of Doug Ford managed to win the PC leadership in a mysterious upset. Oh joy, a “belligerent bully” who wished to run government like a business on policies that made no sense would be in control of our largest province. I was in a state of despair. 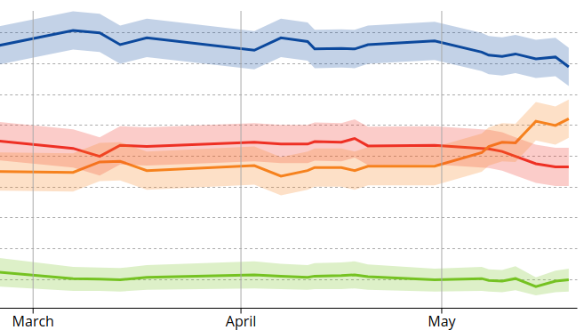 The controversial leader generated controversy and acrimony, which has led to a dip in popularity for the PC’s (official colour: blue). Rather than switch to the scandal-plagued Liberals, though, PC voters are switching to the cleaner NDP (official colour: orange). Fearing a split of the progressive vote could put the PC’s into power anyway, Liberal voters (official colour: red) are shifting over to the NDP too. (Green party voters are off doing their own thing).

That movement hasn’t been enough to assure an NDP victory, as CBC’s Poll Tracker still figures the PC’s have a 95% chance of a majority or minority government. But with two and a half weeks to go, no shortage of new PC scandals, and press coverage that’s overjoyed at the change in fortunes, this could create a bandwagon effect that puts a coalition of two Left-ish parties into power.

Back to Basics » « Sam Harris “Corrects” the Record