I love it when Professor Moriarty wanders back to YouTube, and his latest was pretty good. He got into a spot of trouble at the end, which led me to muse on writing a blog post to help him out. I’ve already covered some of that territory, alas, but in the process I also stumbled on something more interesting to blog about. It also effects Sean Carroll’s paper, which Moriarty relied on.

The fulcrum of my topic is the distinction between inference and abduction. The former goes “I have a hypothesis, what does the data say about it?,” while the latter goes “I have data, can I find a hypothesis which explains it?” Moriarty uses this as a refutation of falsification: if we start from the data instead of the hypothesis, we’re not trying to falsify anything! To add salt to the wound, Moriarty argues (and I agree) that a majority of scientific activity consists of abduction and not inference; it’s quite common for scientists to jump from one topic to another, essentially engaging in a tonne of abductive activity until someone forces them to write up a hypothesis. Sean Carroll doesn’t dwell on this as much, but his paper does treat abduction and inference as separate things.

They aren’t separate, at least when it comes to the Bayesian interpretation of statistics. Let’s use a toy example to explain how; here’s a black box with a clear cover:

Each time we turn the crank on this function, we get back a number of some sort. The abductive way to analyse this is pretty straightforward: we grab a tonne of numbers and look for a hypothesis. I’ll go for the mean, median, and standard deviation here, the minimum I’ll need to check for a Gaussian distribution.

Looks like there’s a slight skew downwards, but it’s not that bad. So I’ll propose that the output of this black box follows a Gaussian distribution, with mean 5.612 and standard deviation 1.409, until I can think of a better hypothesis which handles the skew.

After we reset for the inferential analysis, we immediately run into a problem: this is a black box. We know it has no input, and outputs a floating-point number, and that’s it. How can we form any hypothesis, let alone a null and alternative? We’ve no choice but to make something up. I’ll set my null to be “the black box outputs a random floating-point number,” and the alternative to “the output follows a Gaussian distribution with a mean of 0 and a standard deviation of 1.” Turn the crank, aaaand…

Unsurprisingly, our alternative does a lot better than our null. But our alternative is wrong! We’d get that impression pretty quickly if we watched the numbers streaming in. There’s an incredible temptation to take that data to refine or propose a new hypothesis, but that’s an abductive move. Inference is really letting us down.

Worse, this black box isn’t too far off from the typical science experiment. It’s rare any researcher is querying a black box, true, but it’s overwhelmingly true that they’re generating new data without incorporating other people’s datasets. It’s also rare you’re replicating someone else’s work; most likely, you’re taking existing ideas and rearranging them into something new, so prior findings may not carry forward. Inferential analysis is more tractable than I painted it, I’ll confess, but the limited information and focus on novelty still favors the abductive approach.

But think a bit about what I did on the inferential side: I picked two hypotheses and pitted them against one another. Do I have to limit myself to two? Certainly not! Let’s rerun the analysis with twenty-two hypotheses: the flat distribution we used as a null before, plus twenty-one alternative hypotheses covering every integral mean from -10 to 10 (though keeping the standard deviation at 1).

Aha, the inferential approach has finally gotten us somewhere! It’s still wrong, but you can see the obvious solution: come up with as many hypotheses as you can to explain the data, before we look at it, and run them all as the data rolls in. If you’re worried about being swamped by hypotheses, I’ve got a word for you: marginalization. Bayesian statistics handles hypotheses with parameters by integrating over all of them; you can think of these as composites, a mash of point hypotheses which collectively do a helluva lot better at prediction than any one hypothesis in isolation. In practice, then, Bayesians have always dealt with large numbers of hypotheses simultaneously.

The classic example of this is conjugate priors, where we carefully combine hyperparameters to evaluate a potentially infinite family of probability distributions. In fact, let’s try it right now: the proper conjugate here is the Normal-Inverse-Gamma, as we’re tracking both the mean and standard deviation of Gaussian distributions.

That’s a good start, μ lines up with the mean we calculated earlier, and λ is obviously the sample count. The shape of the posteriors is still pretty opaque, though; we’ll need to chart this out by evaluating the Normal-Inverse-Gamma PDF a few times. 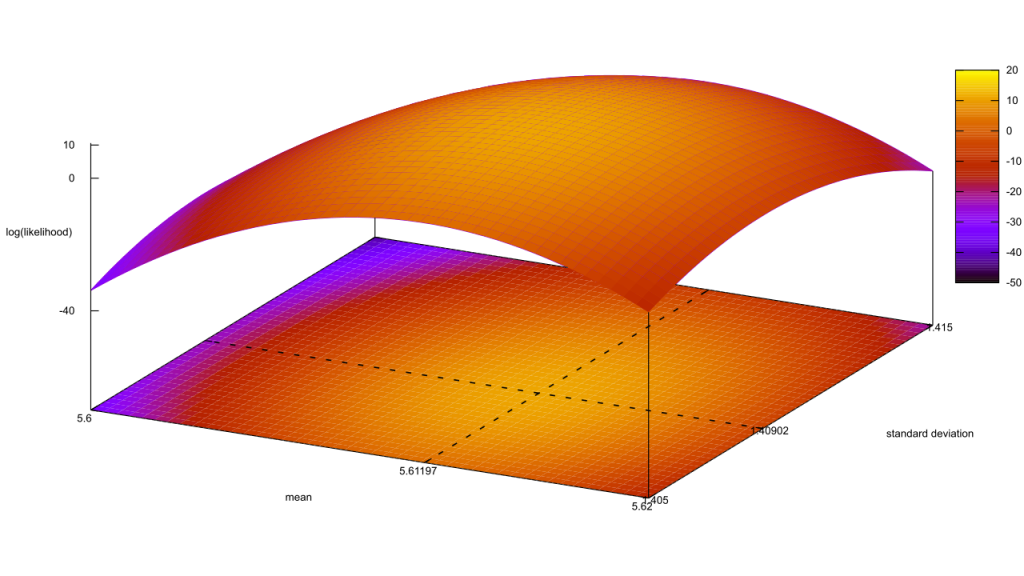 Excellent, the inferential method has caught up to abduction! In fact, as of now they’re both working identically. Think: what’s the difference between a hypothesis you proposed before collecting the data, and one you proposed after? In frequentism, the stopping problem implies that we could exit early and falsely reject our null, when data coming down the pipe would have pushed it back to “fail to reject.” There, the choice of hypothesis could have an influence on the outcome, so there is a difference between the two cases. This is made worse by frequentism’s obsession over one hypothesis above all others, the null.

Bayesian statistics is free of that problem, because every hypothesis is judged on their relative likelihood in reference to a dataset shared by all hypotheses. There is no stopping problem baked into the methodology. Whether I evaluate any given hypothesis before or after I collect the data is irrelevant, because either way it has to cope with all the data. This also frees me up to invent hypotheses whenever I wish.

But this also defeats the main attack against falsification. The whole point of invoking abduction was to save us from asserting any hypotheses in the beginning; if there’s no difference in when we invoke our hypotheses, however, then falsification might still apply.

Here’s where I return to giving Professor Moriarity a hand. He began that video by saying scientists usually don’t engage in falsification, hence it cannot be The Scientific Method, but ended it by approvingly quoting Feynman: “We are trying to prove ourselves wrong as quickly as possible, because only in that way can we find progress.” Isn’t that falsification, right there?

This is yet another area where frequentist and Bayesian statistics diverge. As I pointed out earlier, frequentism is obsessed with falsifying the null hypothesis and trying to prove it wrong. Compare and contrast with what past-me wrote about Bayes Factors:

If data comes up that doesn’t square well with a hypothesis, its certainty takes a hit. But if we’re comparing it to another hypothesis that also doesn’t predict the data, the Bayes Factor will remain close to 1 and our certainties won’t shift much at all. Likewise, if both hypotheses strongly predict the data, the Factor again stays close to 1. If we’re looking to really shift our certainty around, we need a big Bayes Factor, which means we need to find scenarios where one hypothesis strongly predicts the data while the other strongly predicts this data shouldn’t happen.

Or, in other words, we should look for situations where one theory is… false. That sounds an awful lot like falsification!

But it’s not the same thing. Scroll back up to that Normal-Inverse-Gamma PDF, and pick a random point on the graph. The likelihood at that point is less than the likelihood at the maximum point. If you were watching those two points as we updated with new data, your choice would have gradually gone from about equally likely to substantially less likely. Your choice is more likely to be false, all things being equal, but it’s also not false with a capital F. Maybe the first million data points were a fluke, and if we continued sampling to a billion your choice would roar back to the top? This is the flip-side of having no stopping problem: the door is always left open a crack for any crackpot hypotheses to make a comeback.

Now look closely at the scale of the vertical axis. That maximal likelihood is well above 100%! In fact it’s somewhere around 4,023,000% by my calculations. While the vast majority are dropping downwards, there’s an ever-shrinking huddle of points that are becoming more likely as data is added! Falsification should only make things less likely, however.

Under Bayesian statistics, falsification is treated as a heuristic rather than a core part of the process. We’re best served by trying to find areas where hypotheses differ, yet we never declare one hypothesis to be false. This saves Moriarty: he’s both correct in disclaiming falsification, and endorsing the process of trying to prove yourself wrong. The confusion between the two stems from having to deal with two separate paradigms that appear to have substantial overlap, even though a closer look reveals fundamental differences.