We hear a lot about the Kremlin’s hacking exploits (speaking of which, get acquainted with Rinat Akhmetshin), but less about their social media game. Sensitive documents cannot damage public perception if they don’t wind up getting publicity; the DNCC emails didn’t make much of a splash when they were first posted on “DCLeaks,” but made a tremendous splash when they landed on WikiLeaks.

The Kremlin has “troll factories” to do that dirty work, but how do you spot their handiwork? Salty Current points to a great Twitter thread on just that topic.

A pattern you may have noticed: many bot and troll accounts have usernames that end in 8 random digits.

I searched through two recent datasets (propagators of #FireMcMaster and #UniteTheRight hashtags) and found 824 such accounts.

Here’s the follower network formed by those 63099 accounts. Larger circle = more accounts with the 8-digit numbers among its followers.

All very troll-like, but not evidence of a Kremlin op, right?

Here’s an interesting observation – David is posting 8 AM – 8 PM every day, Moscow time. Almost like it’s his job or something.

What’s he tweeting about? This figure illustrates the volume of DavidJo52951945’s tweets mentioning various topics over the years. 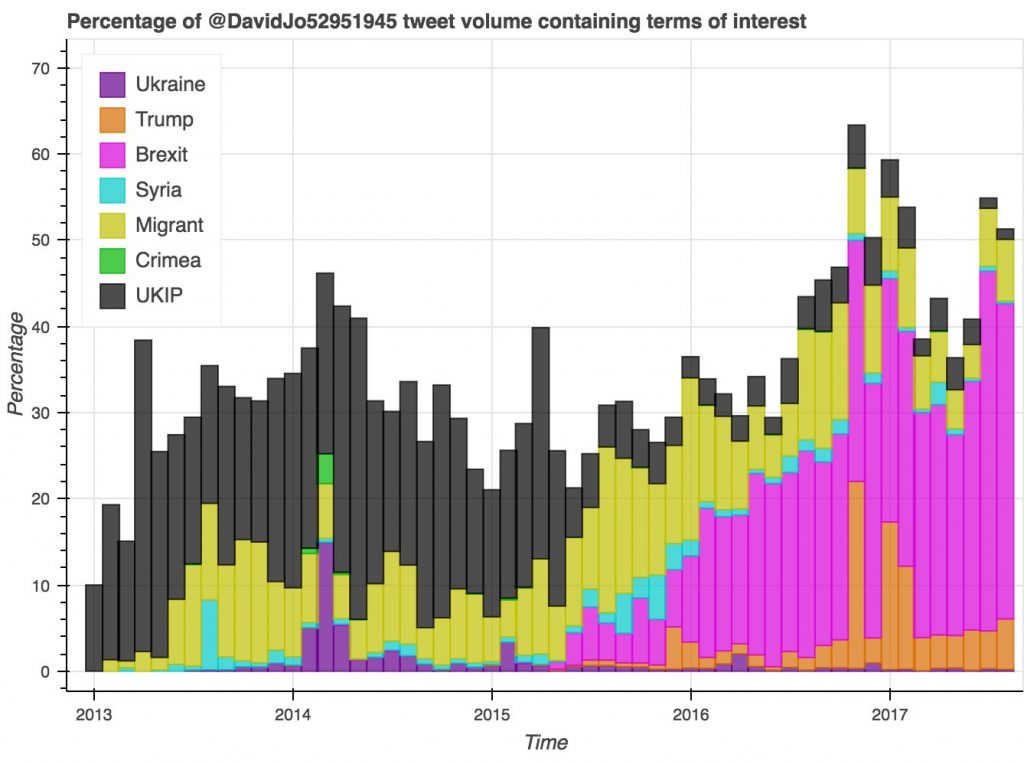 The messaging is very interesting. Let’s go back to 2013, check out DavidJo52951945’s tweets about Ukraine: #TrumpRussia 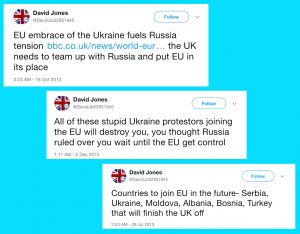 So four years ago, this Twitter account tweeted on Moscow time and was heavily biased towards the Kremlin; four years later, it’s pumping out pro-Trump propaganda that also benefits the Kremlin. If this is a false-flag op, it began two years before Trump announced he was running for US president. Highly unlikely.

Also, if you think this is just a problem for US Republicans, I’ve got another Twitter thread for you.

So how can we tell Marcus is a Russian troll? We can tell by his profile, how much he tweets, where he tweets from, when he tweets,… /12

his problems with English, how he can’t keep his cover story straight, how he plagiarizes others, the threats he makes, the bizarre… /13

things he says, how he’s too good to be true & how he pushes Kremlin propaganda. /14

The timing of Marcus’ tweets is consistent with someone working paid shifts at a Russian troll factory. https://archive.fo/s40DH  /20

Instead of calling the USSR premier “Khrushchev” like Americans would, Marcus uses “Chrustjev” like a Russian. http://archive.is/m3xJD  /48

Russian trolls have strict quotas – they need to post 100+ times/day. https://archive.fo/TlB5x  This hard when you’re English not great. /69

So trolls steal other ppl’s work & pass it off as their own. Marcus does this faster than a cop hands out tickets on the 31st. /70

And so on. It’s excellent detective work, and shows the Kremlin is trying to infiltrate US left-wing politics as well. Compare and contrast this with a typical 4chan op, and you see the handiwork is quite different: the command of English is better; the Twitter handles don’t have eight numeric digits appended; the heavy use of picture memes; and of course, planning the entire thing on a public message board that many people monitor.

It isn’t that hard, once you know what to do. So why not take a boo at what the Kremlin is currently peddling, and roll up your sleeves too?

A Portrait of Cowardice » « Mystery Cults and the Alt-Right