If there’s one thing Canadian can agree on, it’s that our health care system is better than the one in the USA. It’s a chronic talking point.

“Canadians have a genuine fear of ‘American-style’ health care, and any discussion of private partnership in health is quickly quelled for this reason,” the [Ontario Chamber of Commerce] wrote. “But this ignores both the considerable share of health care already delivered by the private sector as well as the robust and equitable role of industry in other single-payer models such as the United Kingdom’s National Health Service or Australia’s Medicare.”

I think it’s actually a problem, as we should be comparing our system to the superior ones in Britain and France rather than being thankful we don’t have it worse. But just when I think the narrative will shift, things like this keep popping up.

The MacArthur-Meadows amendment to the AHCA, proposed by Freedom Caucus Chairman Mark Meadows (R-NC) and Rep. Tom MacArthur (R-NJ), co-chair of the moderate Republican Tuesday Group, would allow states to waive the current ban that prevents insurance companies from charging premium rates to customers based on their health history. This essentially allows pre-Obamacare discriminatory practices to once again be legalized. […]

If the MacArthur-Meadows amendment allows this type of discrimination to come back under the AHCA, survivors of sexual assault and domestic violence would face an extremely difficult decision: seek treatment and be forced to potentially pay more for health insurance, or refuse to go to the doctor and remain untreated for horrific injuries they have endured both mentally and physically. […]

Other largely gender-specific conditions, like postpartum depression and C-sections, would also be considered preexisting conditions under the new health care plan.

Cesarian sections? Sexual assault?! Oh, but it gets worse. 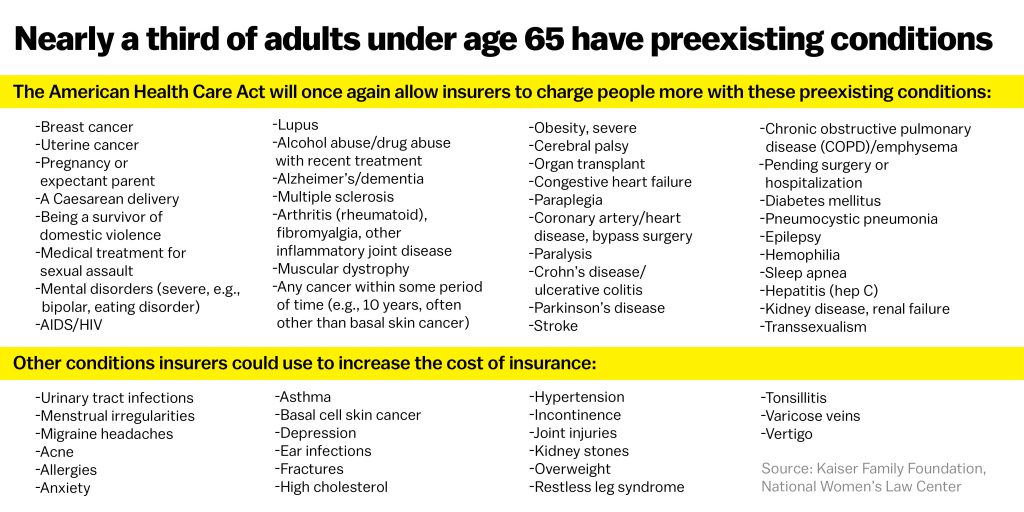 Having hemophilia, allergies, or menstrual irregularities are grounds to charge you more for medical care?! Jesus, America, you really need to get your shit together. Some day I wish I’ll be able to say “if only the Canadian health-care system was as good as the one in the US.”

Intelligence and Race, in sub-populations » « Proof from Design, or the Teleological Proof (4)