Obviously, there’s a lot more work to do as you bump up a dimension! I’ll rely on a computer to do the visual summary for me; again, a black dot indicates the pair of numbers at that location doesn’t shoot off to infinity: 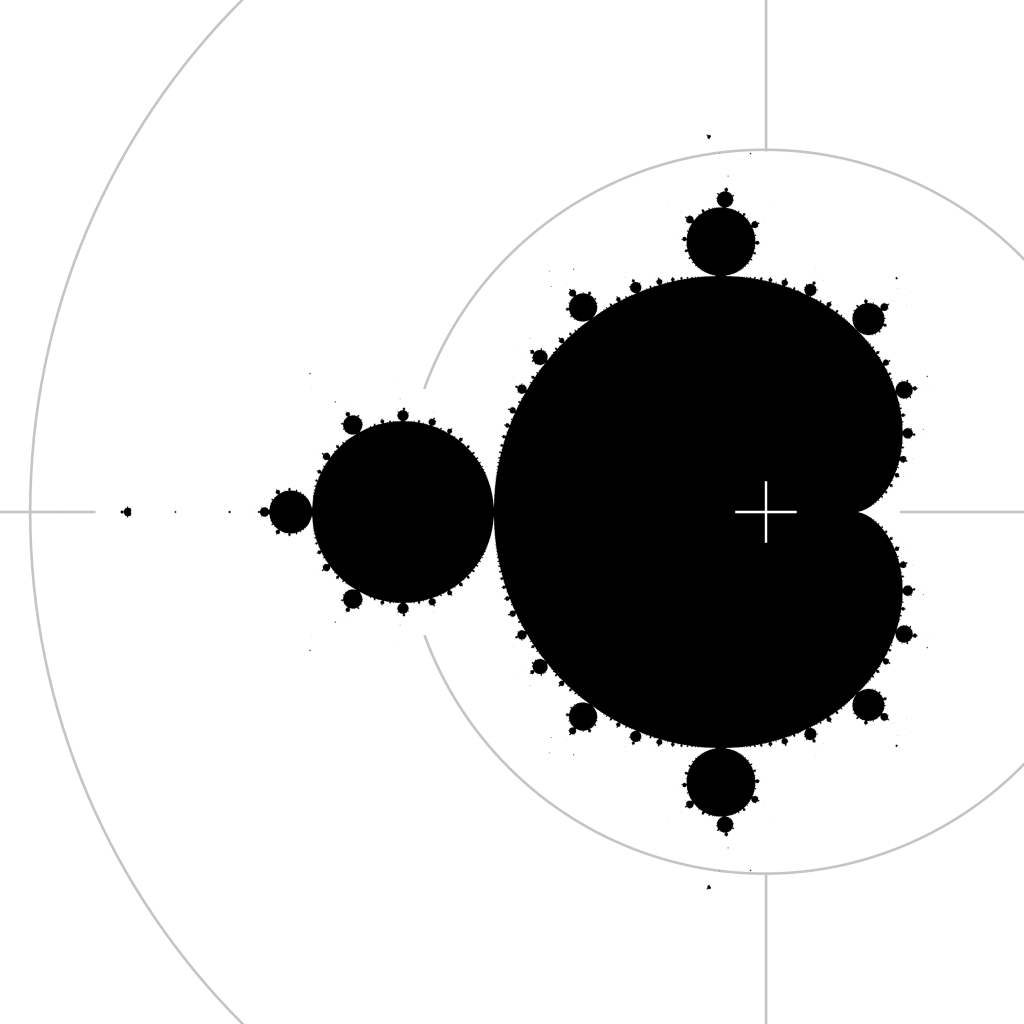 Whaa?! That’s a ridiculously complicated shape! And yet we’re using simple math, nothing fancier then adding and multiplying. How is this possible?

Let’s go back to the one-dimensional version and pick it apart. Multiplying a number by itself will either result in a larger number, if that number is greater than one; a number closer to zero, if that number is between zero and one; or remain the same, if it’s zero or one. To handle negative numbers, lop off the sign then continue as above.

Amplifying a value as it distances itself from a point is called positive feedback, while diminishing it is negative feedback. How much it’s increased or decreased can vary; in this case, the amount of feedback depends on how far that value is from zero.

Notice that if all you do is multiply, your number will only be tugged at by one kind of feedback. As a result the sequence would be very predictable, either leaping towards infinity or crawling towards zero. We could create more complicated behaviour by getting it to switch between the two types of feedback. One way to do that is to make the feedback portion more complicated.

The easiest possible complication is adding a number. This “nudge value” keeps the series from getting stuck in one type of feedback by continually nudging it a little. At least, that’s what happens if you choose the right number; otherwise, one type of feedback will eventually take control for the rest of the series.

Even if you pick a good nudge value, the results can be complicated. Compare the 0.25, -2, and -1.75 columns from the one-dimensional version. The first one slowly creeps towards 0.5, the second jumps directly to 2 and stays there, and the third one slowly creeps towards a cycle of three different values! Poke around enough, and you’ll find nudge values that lead to 2, 4, 5, or any other length of cycle, and even some that refuse to settle down. Sometimes you can guess what a specific nudge will do, but not every time:

The two dimensional version behaves the same way, as I’ve shown. If you still doubt this, take some time to verify it for yourself. I need you convinced this complicated shape is truly a consequence of simple math, and not the interference of a god.

I know it’s tempting to invoke a god, but I suggest you resist.

Go back and look at the formulas. They are extremely simple, so simple that it does not take a trained mathematician to do them. You could train a small child instead, or use a computer, or build your own electrical circuit, or even use rocks and sticks to work out the sums. At what point does this god step in and tweak the calculations? It would have to do so at that very point for every possible way to recreate that formula. It would be easy to recognize when that happens since the calculations would subtly shift, in essence making 1 + 1 = 3 in certain cases. I’ve given you all the tools you need to find this, by showing you how to do the math by hand; by redoing my calculations, and looking for small differences between them and the figure I’ve produced, you will have proven the existence of something supernatural without even leaving your home.

The fact that no-one has found these shifts, despite countless recreations of this complicated shape, suggests that you won’t be leaving your home for some time. It seems safe to declare this shape to be the side-effect of simple math, nothing more or less.

Unhealthy Acts » « Gotta Have McKinnon and Jones, though.