I’ve read a fair number of papers covering race and genes. In fact, before I go farther, here’s a bibliography:

In this article, the authors argue that the overwhelming portion of the literature on intelligence, race, and genetics is based on folk taxonomies rather than scientific analysis. They suggest that because theorists of intelligence disagree as to what it is, any consideration of its relationships to other constructs must be tentative at best. They further argue that race is a social construction with no scientific definition. Thus, studies of the relationship between race and other constructs may serve social ends but cannot serve scientific ends. No gene has yet been conclusively linked to intelligence, so attempts to provide a compelling genetic link of race to intelligence are not feasible at this time. The authors also show that heritability, a behavior-genetic concept, is inadequate in regard to providing such a link.

The literature on candidate gene associations is full of reports that have not stood up to rigorous replication. This is the case both for straightforward main effects and for candidate gene-by-environment interactions (Duncan and Keller 2011). As a result, the psychiatric and behavior genetics literature has become confusing and it now seems likely that many of the published findings of the last decade are wrong or misleading and have not contributed to real advances in knowledge. The reasons for this are complex, but include the likelihood that effect sizes of individual polymorphisms are small, that studies have therefore been underpowered, and that multiple hypotheses and methods of analysis have been explored; these conditions will result in an unacceptably high proportion of false findings (Ioannidis 2005).

Less prominent in this debate has been a discussion of what is meant by racial groups and whether such groups are, in fact, discrete, measurable, and scientifically meaningful. The consensus among most scholars in fields such as evolutionary biology, anthropology, and other disciplines is that racial distinctions fail on all three counts — that is, they are not genetically discrete, are not reliably measured, and are not scientifically meaningful. Yet even these counterarguments often fail to take into account the origin and history of the idea of “race.” This history is significant because it demonstrates that race is a fairly recent construct, one that emerged well after population groups from different continents came into contact with one another. In this article we examine the origins of the concept of race, placing the contemporary discussion of racial differences in an anthropological and historical context.

Smedley, Audrey, and Brian D. Smedley. “Race as Biology Is Fiction, Racism as a Social Problem Is Real: Anthropological and Historical Perspectives on the Social Construction of Race.” American Psychologist 60, no. 1 (2005): 16.

My favourite argument here doesn’t come from a scientific paper, though, it’s from this website. The data isn’t well organized, though, so I’ll take a crack at restating its arguments.

The basic claim of Charles Murray and other scientific racists is as follows:

There are a number of ways to counter-argue this, but an interesting approach is to exploit the asserted homogeneity of race. Black people are black people, whether they come from Somalia, South Africa, or the Southern United States, so if you split them up into sub-groups you should get roughly the same test scores.

That isn’t what you see, however. In 2010, the British Equality and Human Rights Commission published a series of stats, one of which broke down educational attainment by multiple groups. Not only did it split “black” into a series of subgroups, it also separated by gender and whether or not kids had access to school lunches. The latter is very handy, as there are fewer ways to be poor than to be well-off; if your income is too low to provide lunches, you’re spending most of your income on housing and food and have few toys, whereas the opposite group captures everything from a middle-class family which takes the occasional holiday to an upper-class family which sinks tonnes of money into tutors and tuition.

In three of the four sub-categories (girls ineligible for school lunches, both boys and girls eligible), black children of African descent outperform white Brits. The net average for both groups slightly favours white Brits, however, which must be due to the influence of boys ineligible for school lunches, the subgroup with the most wealth and privilege.

Something similar occurs in other race subgroups. Poor black kids of Caribbean descent, and poor kids of Pakistani descent, also outperform their white Brit peers, and in the case of girls that difference is substantial. So what we see contradicts the prediction of a strong race-intelligence link, and favors strong environmental effects. These changes aren’t static, either; more recent data shows Bangladeshi students outperforming white Brits, and black Africans remaining in a dead tie. 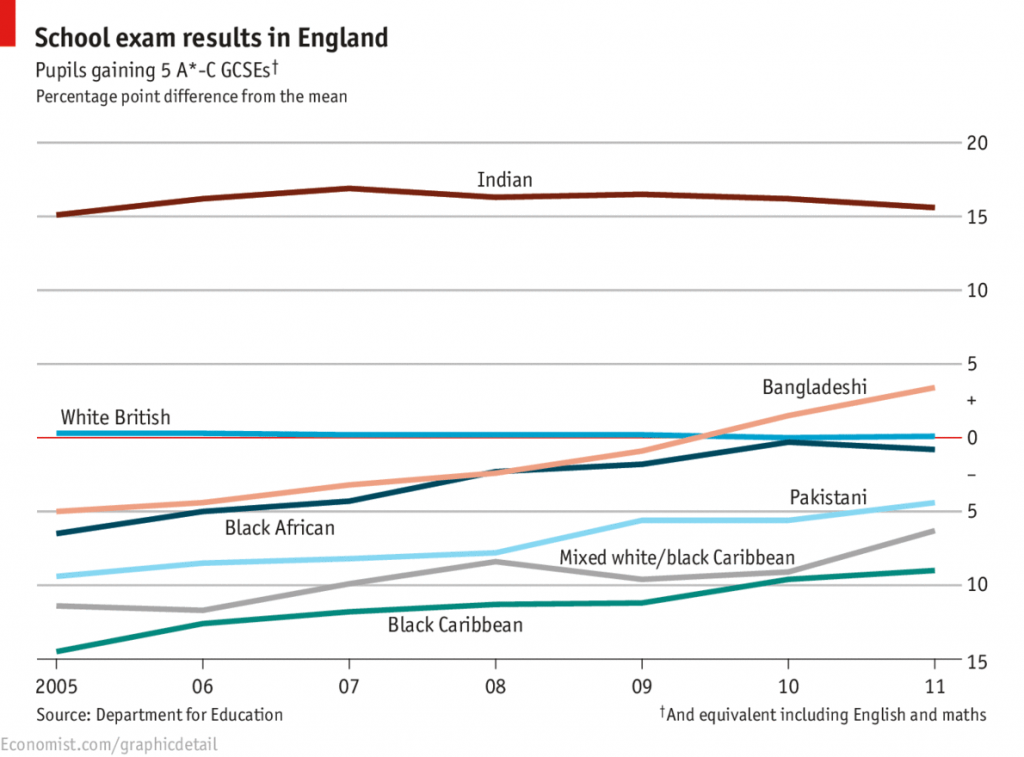 This is also a problem for scientific racists. The frequency of genes in a population change relatively slowly, since they need to diffuse through millions of people yet only transfer through inheritance. Changes this quick in a long-lived, low-litter large mammal must be coming primarily from social factors.

We can go farther. Africa is a large continent, and some countries are radically different from each other. Somalia, for instance, has been in intermittent civil war since 1991. Nigeria has about 20 times the population of Somalia, in contrast, and has been a stable-ish democracy since 1999. Wikipedia’s page on it is glowing.

As of 2015, Nigeria is the world’s 20th largest economy, worth more than $500 billion and $1 trillion in terms of nominal GDP and purchasing power parity respectively. It overtook South Africa to become Africa’s largest economy in 2014. The 2013 debt-to-GDP ratio was 11 percent. Nigeria is considered to be an emerging market by the World Bank; it has been identified as a regional power on the African continent, a middle power in international affairs, and has also been identified as an emerging global power. Nigeria is a member of the MINT group of countries, which are widely seen as the globe’s next “BRIC-like” economies. It is also listed among the “Next Eleven” economies set to become among the biggest in the world.

Ghana, with a tenth the population of Nigeria, was in even better shape. It’s been a stable democracy since 1992, and up until 2013 it was quite well off due to “a quarter century of relatively sound management, a competitive business environment, and sustained reductions in poverty levels.” Alas, their government started wracking up large deficits and faced currency devaluation, so growth has stalled in recent years. 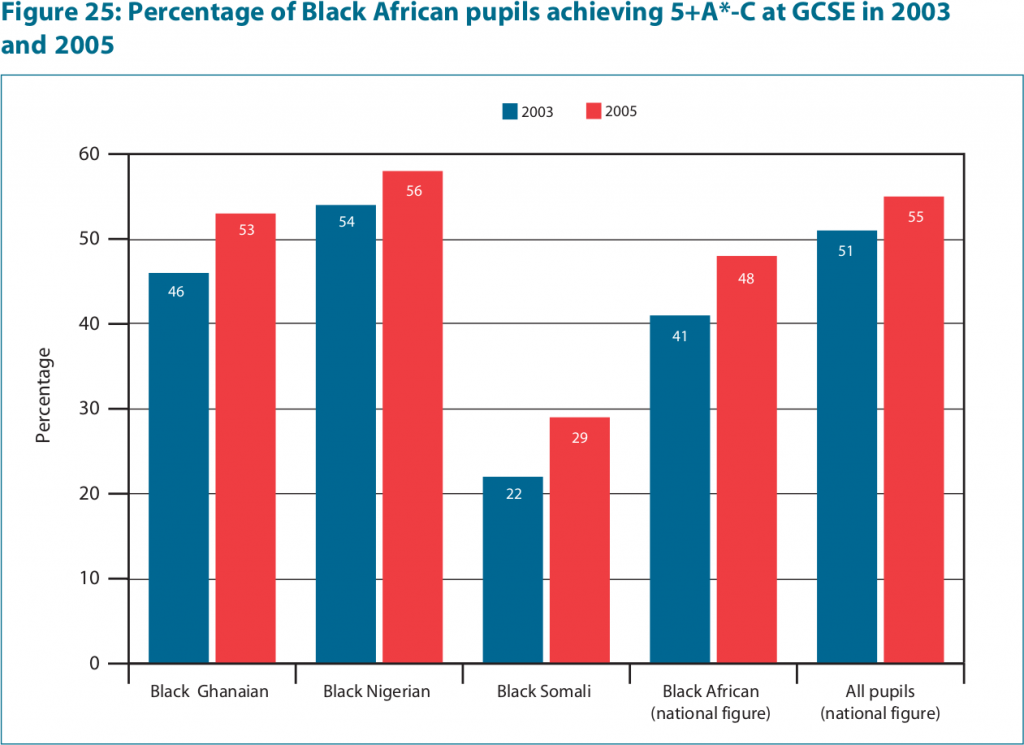 And yet, according to numbers from the British Department for Education and Skills, British students of Nigerian students outperformed the average British student, those hailing from Ghana were only slightly behind, and Somali students did quite a bit worse than all of the above. The Institute for Public Policy Research has more recent numbers, and these confirm the same basic pattern. 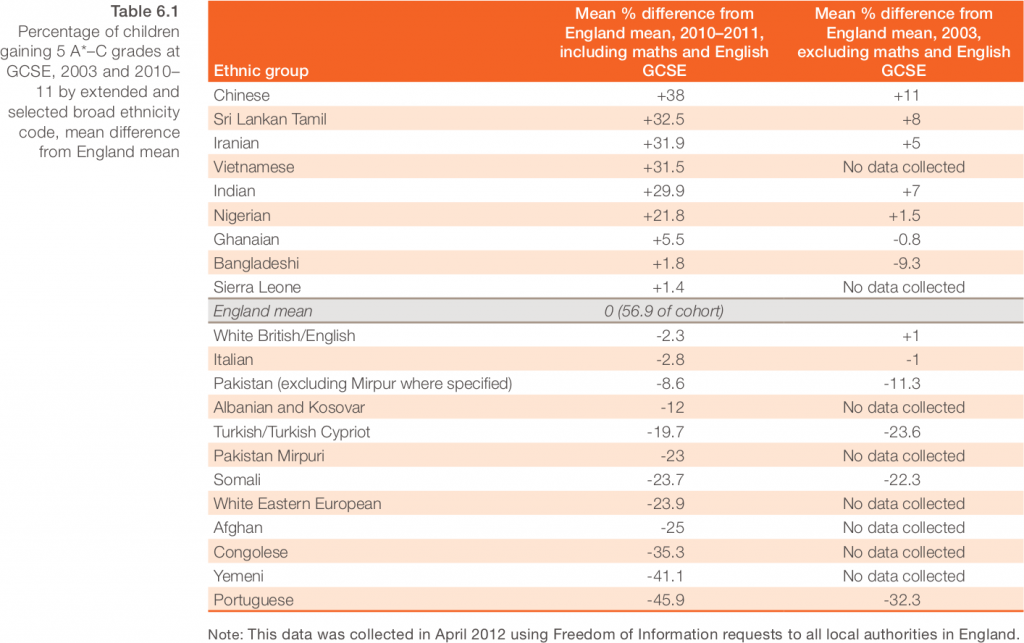 Students hailing from Nigeria are well above the British norm as of 2010, Ghanaian students are modestly above the norm, and Somalis are still significantly worse. Interestingly, Iranians and Tamils also do well above the norm, and Bangladeshi students are a smidge ahead, yet white Brits slightly underachieve. This creates a bit of problem, if we leap back to the Department for Education and Skills report. 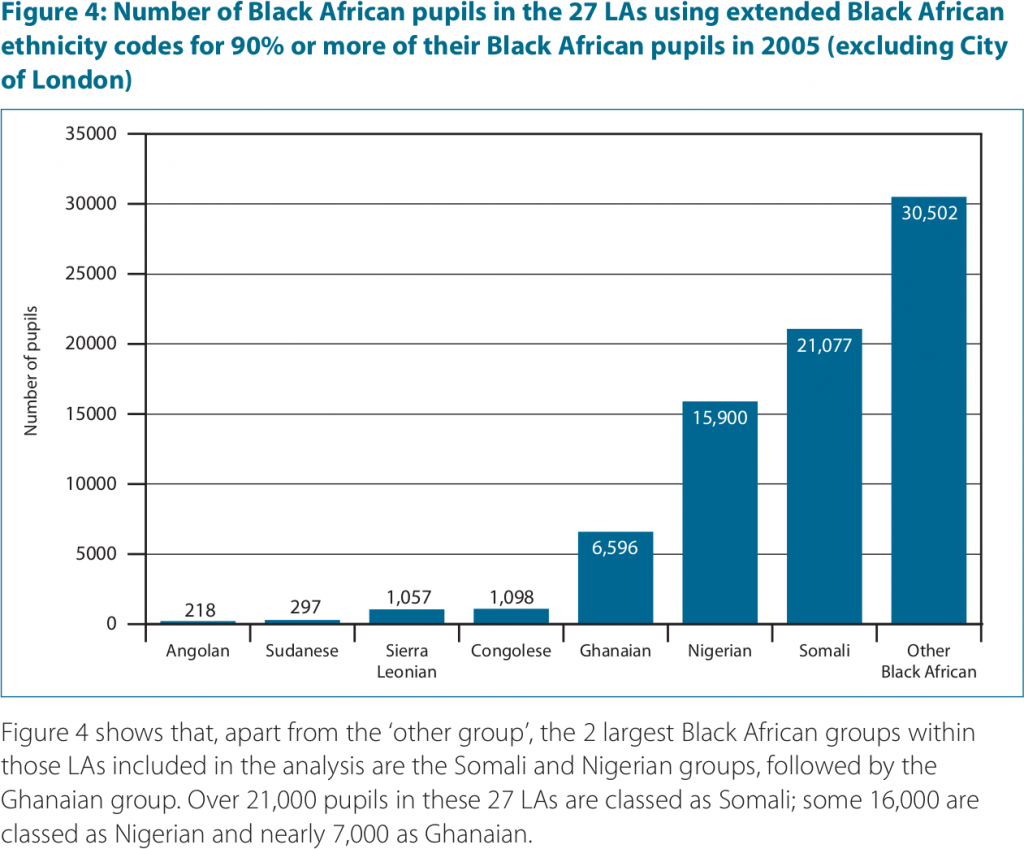 There are more Somali students than Nigerian ones. If you lump all students hailing from Africa together, the poor scores of Somali students will more than compensate for the great Nigerian ones and the overall average will get tugged downward. By treating blacks as a monolithic race, we’re erasing information which shows they are not a monolith.

Bored yet? Too bad, because there’s one more angle! As I’ve pointed out before, immigrants tend to congregate into enclaves. If there is substantial social pressures on a minority coming from the majority, you’d expect those pressures would have less strength when the minority had become a local majority. The borough of Lambeth makes an interesting case study, as they’ve looked into the question in detail.

Over the past three decades, national research has shown Black pupils’ achievements lag far behind the average achievement of the majority of their peers. However, recent research suggests that of the Black groups, pupils of African heritage achieve standards significantly above their peers, but few studies have asked African parents and pupils about the factors contributing to their success. This research aims to examine performance trends and the success factors behind high achievement of Black African students in schools. The main findings of the research show that Black African students were more likely to gain good grades above their peers at GCSE.

The report focused on two sub-groups in particular. The first was a case study of eight schools which had a mix of unusually high grades, numbers of black students, and poverty. The second was students hailing from Lambeth Local Authority or “LA.” 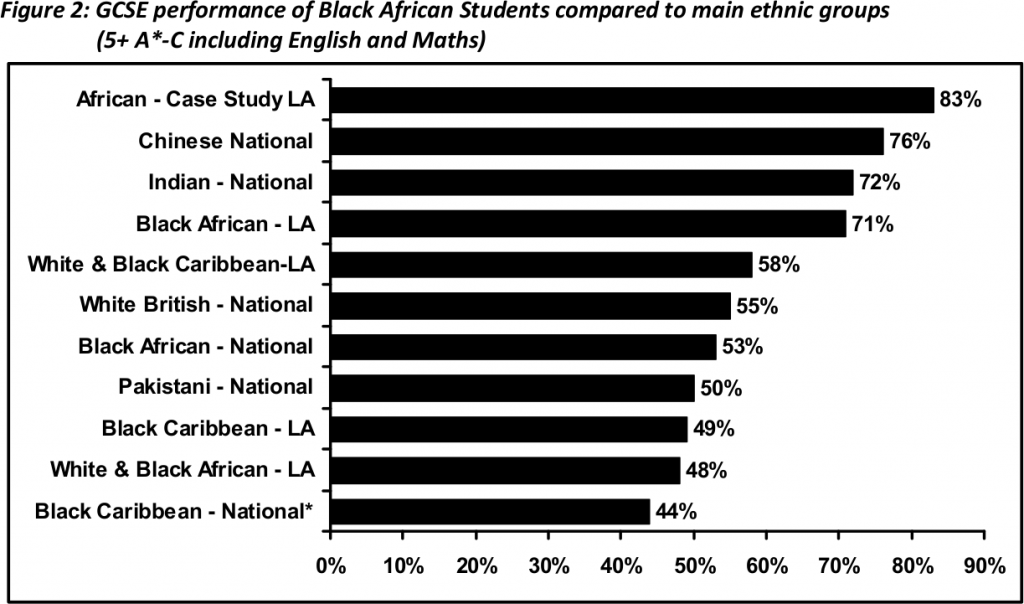 These students do exceptionally well, despite the above-average levels of poverty. A time-series of this data shows it’s not a statistical fluke. 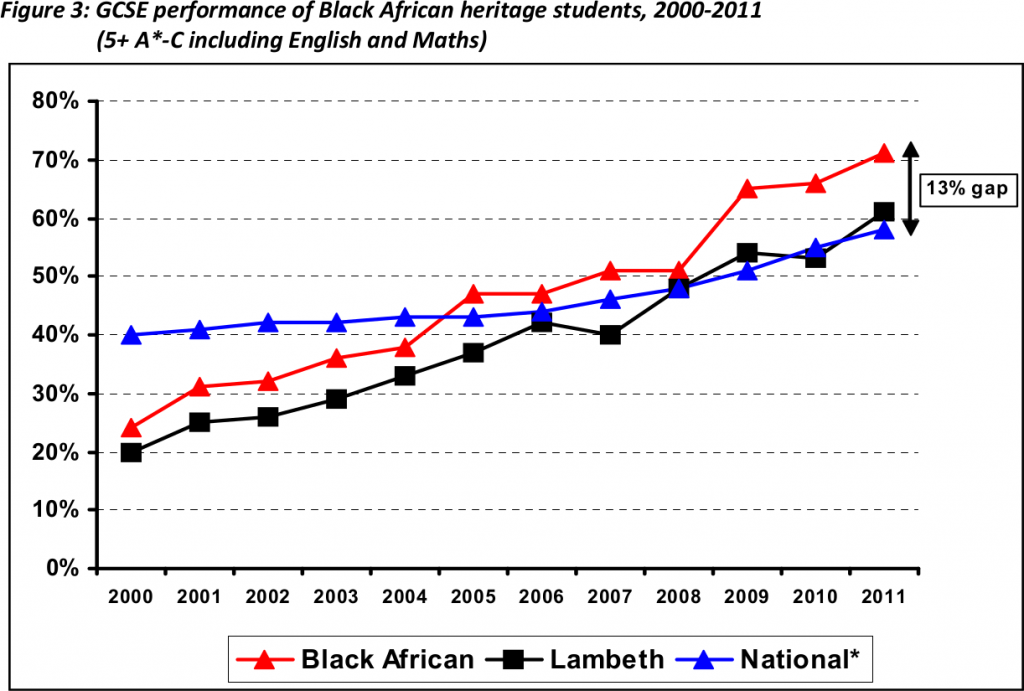 So why do Lambeth’s black students prosper when others in Britain don’t? The authors of the report went in and did extensive interviews with students, parents, and teachers.

The study identified a number of good practices that contribute to the success, including high educational aspiration of African parents and pupils, inspirational leadership, high expectation for all students, diversity in the school workforce, strong parental support, an inclusive curriculum that meets the needs of African students and adds to their growing pride in being African and strong links with African communities. In addition to the above, Black African parents place an extremely high value on education and teachers in the schools are equipped to ensure that the curriculum meets the needs and interests of children of Black African heritage. What is particularly special about these schools is that local communities are represented well in the school and they have staff who speak many of the languages of the local community. As a result, children feel that they can relate to a member of staff from their own cultural background and are highly motivated.

None of which involved tampering with their genes. Social and cultural factors must be the primary driver of intelligence; any differences we see along racial lines are probably due to racism or cultural values. If genes play a role at all, it’s in such a minor way that it can be ignored entirely.

But Everything Worked Out, Right? » « Unhealthy Acts