Person the first, Travis Clark, a defrocked priest who was arrested for having consensual relations with two sex workers in a Catholic church: 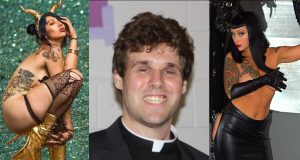 A former Catholic priest who was arrested in 2020 after a passerby saw him and two dominatrices having sex on the altar of Pearl River church pleaded guilty Monday to a single count of felony obscenity. Travis Clark listened to 22nd Judicial District Judge Ellen Creel read the elements of the obscenity statute at the courthouse in Covington. Clark, 39, received a suspended prison sentence and will serve probation.

Clark and two women, Mindy Dixon and Melissa Cheng, were arrested in September 2020 after a passerby noticed lights on at Sts. Peter and Paul Catholic Church in Pearl River. The witness saw Clark, partially naked, having sex with two women who were wearing corsets. When police arrived, they seized sex toys, stage lights, a cell phone and the tripod-mounted camera.

Person the second, a fully frocked Gregory Aymond, who carried out magic rituals to erase the demonic presence of the sex workers, among the least of his silly superstitious acts: 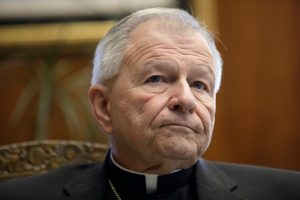 New Orleans Archbishop Gregory Aymond last appeared on JMG in October 2020 when he held a ritual burning of the altar upon which “demonic” dominatrices had filmed a three-way with a local priest in view of passersby.

Earlier in 2020 he appeared here when his archdiocese declared bankruptcy in the face of an avalanche of abuse lawsuits.

Also in 2020, Aymond flew aboard a World War II-era biplane on Good Friday to sprinkle holy water on New Orleans in order to stop the spread of coronavirus.

More seriously, he has defended pedophiles, opposed abortion, and wants gays back in the closet, the usual vile Catholic shit.

Which one scares you more?

High heels vs AR15, guess who won » « I can tell it’s Thanksgiving week