First Dog on the Moon does adequately capture our current sense of the state of the pandemic, although saying “10,000 dead” is so quaint — but then, it’s an Australian comic. American policy has been so consistently stupid that we have over 1,000,000 dead here. Also, I don’t know what a “bbg*” is, someone will have to explain it to me. 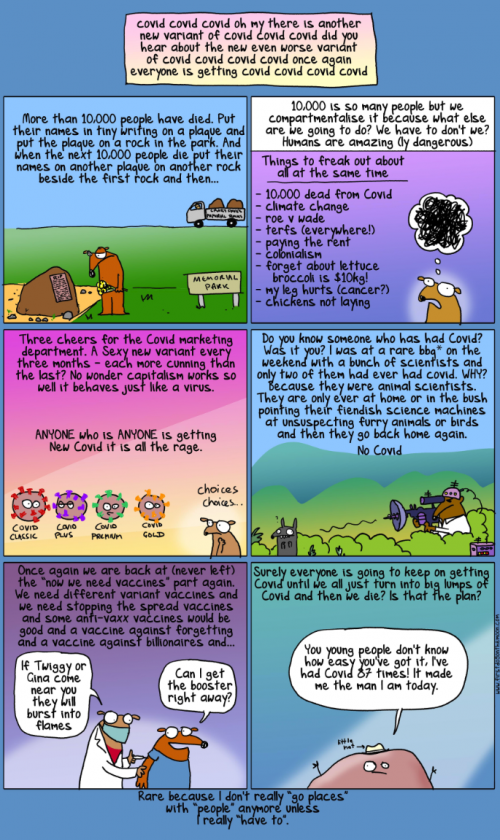 The fourth panel hits home, too.

Do you know someone who has had COVID? Was it you? I was at a rare bbg* on the weekend with a bunch of scientists and only two of them had ever had COVID. WHY? Because they were animal scientists. They are only ever at home or in the bush pointing their fiendish science machines at unsuspecting furry animals or birds and then they go back home again. No COVID.

I’ve never had COVID. WHY? Because am only ever at home or in the field or in the lab pointing fiendish science machines at unsuspecting spiders. I’ve been scrupulous about social distancing and masking everywhere I go, I’ve gotten 4 vaccine shots, and while I had to teach a mob of disease vectors, they all had to wear masks and spread out (former university policy), and I took measures to move as much of my courses online as possible. That’s why.

That was at some cost, too. My big pre-pandemic project was to do community outreach and get a baseline spider population count in homes around here…well, that got monkey-wrenched hard by the disease so I’ve been focused on just the spiders, forget the plague carriers. And oh, man, all the work involved in transforming my classes, without compensation other than not getting sick!

Now all those protective measures have been torn down by my university, and I feel like this is the year they’re going to reward me for 22 years of service with a potentially deadly disease. They’ll be saving on pension expenses, at least.