George Floyd was just the tip of the iceberg. There’s a new report out on our cops, and it’s not pretty. They’re under-trained bigots who take a military approach to policing. They kill people at an alarming rate. 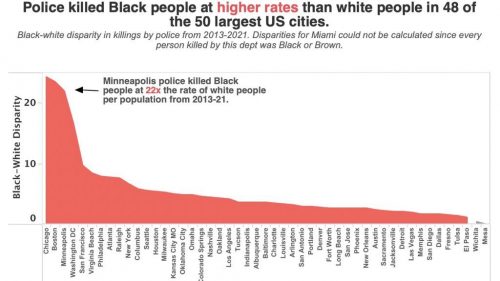 The report said race-based policing in Minneapolis is primarily a result of police force culture. Officers, supervisors and trainers “receive deficient training, which emphasizes a paramilitary approach to policing that results in officers unnecessarily escalating encounters or using inappropriate levels of force,” it said.

The department’s accountability systems are “insufficient and ineffective at holding officers accountable for misconduct,” the report said. But it said former and current city and police leaders have failed to act, effectively allowing an aggressive culture to fester.

The report said the department maintains a culture where officers “consistently use racist, misogynistic, and disrespectful language and are rarely held accountable” for it.

Fire them all. Or at least, go through their records and ruthlessly fire anyone with a history of discrimination and violence — kick out everyone with spousal abuse on file, for instance. There go 90% of the cops!

I know, that’s unrealistic. Instead, they’ll do nothing and use the report as an excuse to hire more, presumably “better” cops. Maybe get some more tanks and SWAT teams.

Former Minneapolis police officer Derek Chauvin has filed an appeal, asking the state Court of Appeal to overturn his conviction for killing George Floyd in 2020, according to CNN. Chauvin was found guilty of unintentional second-degree murder, third-degree murder and second-degree manslaughter, and was sentenced to 22 1/2 years in prison by Hennepin County Judge Peter Cahill back in June, NPR reports.

An 82-page brief filed on Monday alleged that several factors during the case corrupted proceedings and made them “structurally defective,” CNN reports. One of the factors also noted was the pretrial publicity, protests outside the courthouse and the announcement during jury selection that Floyd’s family would receive a $27 million settlement. It continued, describing the court proceedings as “so pervaded by error, misconduct and prejudice that they were structurally defective.”

What a shame that he chose to publicly, callously murder a man in front of all those phone cameras. If it hadn’t been for all the publicity, nobody would have caught on and he’d be a free man today, probably still with a good job with the Minneapolis police department. And the Floyd family probably wouldn’t have gotten that settlement if the whole world hadn’t seen Chauvin openly execute a man!

Doesn’t everyone realize he was innocent, just a product of accepted Minneapolis police behavior?

There’s a reflection in the clouds above the Capitol! » « I thought we’d moved beyond this in the ’70s