Oh, and it’s satanic. A satanic portal. We know this because Roger Stone says so. Here’s a picture of it: 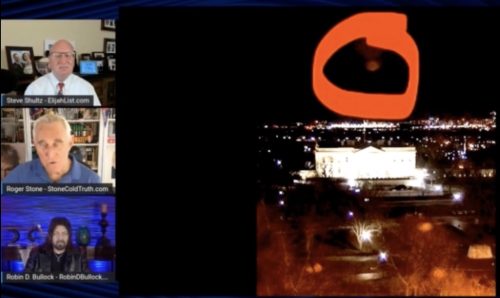 I wouldn’t have believed it, except they drew a gigantic, thick, crude orange oval around it, so it must be true. Also, the people testifying to it are so trustworthy. 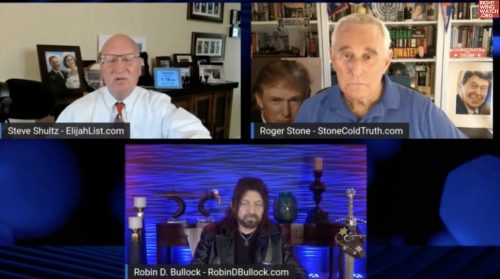 That’s Steve Schultz, an evangelical Christian who runs something called “Elijah’s List”, where people talk about Bible prophecy, and Roger Stone, who has surrounded himself with pagan paraphernalia featuring his gods, Ronald Reagan and Donald Trump, and another evangelical, Robin D. Bullock. Bullock would worry me, if I were a Christian. He’s nestled into an altar with candles and a sword and various paganish elements, so he’s clearly a witch.

What they have discovered is that if you have a brightly lit building or monument, you will sometimes see reflections in the clouds above it. It’s an entirely natural phenomenon. In their minds, though, they are frantically seeking out patterns that fit their presuppositions, and then interpreting them in a way that reinforces their beliefs. People do this all the time, and the interpretations become more and more extreme if you’re hanging out with a group that totally lacks any skeptical input — it’s self-reinforcing, and is just going to get crazier and crazier, with each of those three reassuring each other that no amount of wackiness is going to trigger reason.

So a glow in the sky become’s Satan’s cauldron and a portal to hell because they want to think the worst of the man in the White House. If we went back a few years and took a similar picture while Trump was in office, it would be a sign from God, like the star of Bethlehem, that the man below it was the anointed one.

Here’s a video by a guy who wasn’t a gullible Stone Stooge who went looking for the Satanic Portal. It wasn’t there. He sees lots of reflections and lens flares from the bright lights around the building, and speculates that the White House live webcam, which is situated high up on a nearby building, has one of those lights shining in such a way as to reflect off the lens.

Sounds reasonable, far more likely than Satan building a glowing portal in the sky. But hey, you wild and wacky evangelical Christians: keep on praying. It won’t do any harm, and keeps you busy.