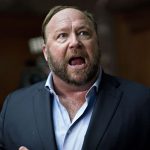 Alex Jones offered each of the families of the Sandy Hook children he defamed $120,000 to settle their lawsuits against him. They turned him down.

Each of the plaintiffs turned down the settlement offer in court documents, saying, “The so-called offer is a transparent and desperate attempt by Alex Jones to escape a public reckoning under oath with his deceitful, profit-driven campaign against the plaintiffs and the memory of their loved ones lost at Sandy Hook.”

Jones treated those murdered children as things, things he could use to jack up right-wing hysteria and fuel profitable traffic to his site. They are not things. Jones was so unconscionably exploitive and abusive that I can entirely sympathize with those parents. They aren’t looking for money, something else Jones can’t understand. They are out to destroy a locus of hatred, one that grew on the bodies of dead children.

InfoWars has now declared bankruptcy, saying they only have assets of between $0-$50,000. That’s a lie. They have a heavily-trafficked website that brings in at least that much every week; they get ad revenue from Breitbart, so at least one other right-wing site is propping them up; they’ve got a quack store and must have a storage facility filled with crap like Ultra Brain Force (although, I’ll give them this: if their supply was valued for their effectiveness, it would be worth $0) and stupid hats; just the video gear that they use to record and edit all the lies they pump out has got to be worth more than that. Jones has a house and cars and a studio.

Take them all and put Jones in an institution for the criminally insane. Cut off all the “reporters” he supports — Ian Miles Cheong, Owen Shroyer, Millie Weaver, Margaret Howell, Savannah Hernandez, etc. — and let them get jobs serving fast food somewhere, if they’re qualified for that. Burn it all down. Scatter salt on the careers of all the people affiliated with it.

This super-villain must be stopped » « Wait, when did Casey Luskin get a Ph.D.?